What Lies Twixt Production and Reproduction: The Original Image

Investigating the space between original art and its many reproductions, The Original Image demands full attention

[dropcap style=”font-size:100px; color:#992211;”]”What[/dropcap]
makes lovemaking and reading resemble each other most is that within both of them times and spaces open, different from measurable time and space.”

― Italo Calvino, If on a Winter’s Night a Traveler

The trajectory of stress could probably be written in tabs. Internet browser tabs. I too am guilty of it – one window opens onto another until the possibility of truly ‘reading’ the images and fragments of text, that flagged themselves as of being of potential interest, becomes unattainable. At the point of ‘tab saturation’, the instinct is one of flight rather than fight. The right hand corner cross beckons and the house of cards comes tumbling down. What a thrill. Both author and the reader (that might have been), killed in one glorious jab of the index finger. But what if they weren’t?

That ‘what if’ is the question that permeates the web of interrelated images of The Original Image. Here, time unravels, constellates, congeals. Here, play-back means play(ing). Remembering – through touch, through looking, through really looking – is a creative act that allows for images from the past to operate in fresh new contexts. It is an environment that contains active thought, where art history dances with contemporary painting in a tactile, gestural, lived experience. Images break off, combine and re-assemble; injecting sentiment and subversion into our contemporary suffocation of technological overload and stale, disaffected narratives.

Between 1958 and 1968, Lucio Fontana made a series of works collectively known as Tagli or ‘cuts’ which all consisted of a canvas that had been cut once or more. Destruction and creation co-existed as the negation of the two dimensional plane opened three dimensional sculptural possibilities. Or rather, in Fontana’s words: ‘Art dies but is saved by gesture’. (Lucio Fontana 1899-1968: A Retrospective, exhibition catalogue, Solomon R. Guggenheim Museum, New York 1977, p.19)

Fontana’s Tagli feature in the paintings of Martin McGinn. Images from art catalogues are ripped from their table top sepulchres and attached to an imagined studio wall with pins and tape. The oil paint is thick, the pins of ‘Four Blank Pages’ (2013) are real, the tape of ‘Spatial Concept Yellow’ (2014) is not – but only to the attentive viewer. The catalogue page featured in ‘Spatial Concept Blue’ (2013) curls at the edges, though perhaps that’s the paint again. This oscillation between illusory depth and flat reality distorts the painting/sculptural divide and reveals the hand of the artist as the point between the original, the reproduction and the new. The frenetic energy of the pinning and physicality of the paint breathe life into dead images, as the ephemeral pages become still lives in their own right that mobilize our gaze across, beneath and beyond the frame. ‘Gesture’, it would seem, saves the day.

Lucy Graves’ paintings also play with the idea of browsing. Whereas McGinn reintroduces the notion of human interaction to images that have been subsumed into a cycle of reproduction and passive consumption, Graves piggybacks on the collaged quality of multiple internet browser windows to juxtapose familiar images of museum artefacts with domestic activities. 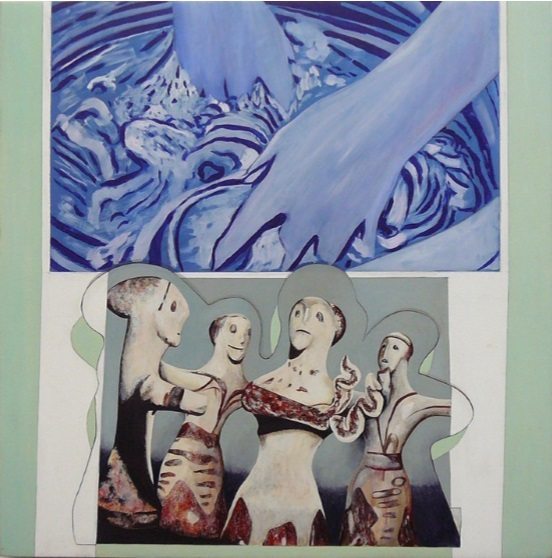 In Death 24x A Second, film theorist Laura Mulvey suggests that new technologies – such as slow motion, repetition and freeze-frame – give viewers a new way of experiencing the cinematic image in that, by controlling images and stories, films may be followed in a non-linear fashion. Mulvey argues that this ability shifts the spectator’s pleasure away from the voyeuristic (and implicitly male) and into the fetishistic, as well as exposing the material and aesthetic attributes of the moving image.

There is something unstable about the photographs of Mark Corfield-Moore. His black and white series Stiff Peaks occupies the back wall of the gallery – slightly aloof perhaps. The aura of absence, however, is not of its original grandiose form. Corfield-Moore has appropriated archival imagery of classical busts held at The British Museum, piped icing upon the surface and re-photographed them. Instead of the slightly superior expressions of stony male faces, we are met with a gallery of turned heads, covered with sugary rococo ornamentation. Embarrassed, disapproving, indifferent? The juxtaposition of marble and decorative icing re-genders the images, destabilizing the monumentality of their bases and causing them to slip into the more delicate, playful frame of reference of the in-between.

‘You say it’s only a paper moon, Sailing over a cardboard sea/But it wouldn’t be make believe if you believed in me’ sings Ella Fitzgerald, and in The Original Image we are thrown into a multilayered world of smoke and mirrors in which we meet and re-meet through time and space. Our arms follow the hands swirling the impossible blue of the washing up bowl, our gaze reaches for stability through the interplay between sugar and sculpture, the pins beckon us to rearrange the painted canvas.

Each artwork provokes further questioning rather than conclusions, allowing the viewer to continue the proliferation of potential meanings by entering into a participatory exchange with the (original) image(s). The past is not finished with us, they whisper; perhaps we should not be so quick to finish with the past.

By investigating the space between art and its reproductions through the re-examination and appropriation of images, The Original Image demands that ‘Surfing’ be an option no longer.
Close down your tabs. Reach Out. Engage. Dive In.

Previous Story:
Do You Have a Postcode for that, Sir? Archaeologists Discover Outer Reaches of the Silk Road

Next Story:
Forget Lipstick on the Collar, Viral Tracking Reveals Exactly Where You’ve Been