Do You Have a Postcode for that, Sir? Archaeologists Discover Outer Reaches of the Silk Road

New evidence uncovered by University of Cambridge archaeologists suggests that trade and delivery networks two and a half millennia ago went further south, and higher up, than we thought.

No ‘While You Were Out, We Tried to Deliver Your Package’ message has been uncovered as yet.

The first results of textile and dye analyses of cloth dated between 400-650 AD and recovered from Samdzong 5, in Upper Mustang, Nepal have today been released by Dr Margarita Gleba of the McDonald Institute for Archaeological Research, University of Cambridge.

Identification of degummed silk fibres and munjeet and Indian lac dyes in the textile finds suggests that imported materials from China and India were used in combination with those locally produced. Says Gleba: “There is no evidence for local silk production suggesting that Samdzong was inserted into the long-distance trade network of the Silk Road.”

“The data reinforce the notion that instead of being isolated and remote, Upper Mustang was once a small, but important node of a much larger network of people and places. These textiles can further our understanding of the local textile materials and techniques, as well as the mechanisms through which various communities developed and adapted new textile technologies to fit local cultural and economical needs.” 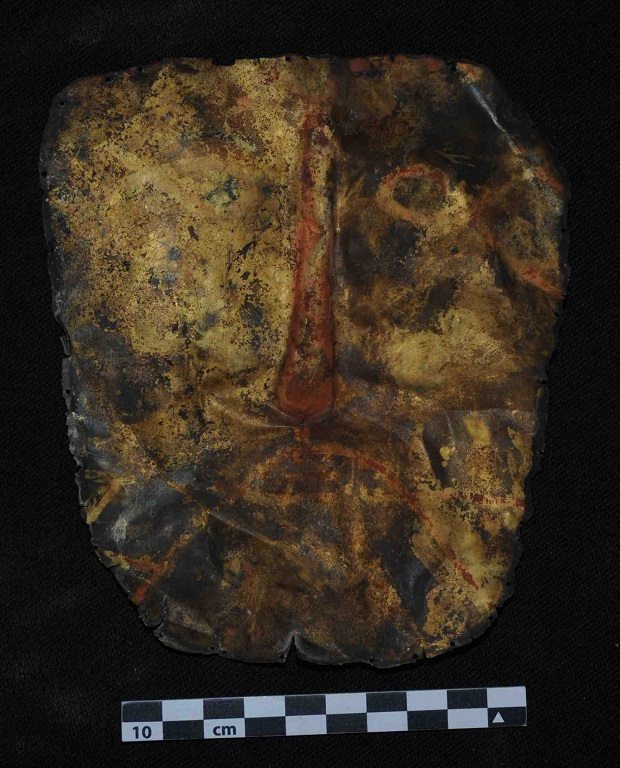 This is a gold/silver mask believed to cover the face of the adult in the coffin of the Samdzong 5 tomb complex, Upper Mustang, Nepal.

The cloth remains are of further significance as very few contemporary textile finds are known from Nepal. The dry climate and high altitude of the Samdzong tomb complex, at an elevation of 4000m, favoured the exceptional preservation of the organic materials.

One of the cloth objects recovered is composed of wool fabrics to which copper, glass and cloth beads are attached. It was found near a coffin of an adult along with a spectacular gold/silver funerary mask. The mask has small pinholes around its edges, suggesting it had been sewn to a fabric, and probably constitutes the remains of a complex, decorative headwear.

Samdzong 5 is one of ten shaft tombs excavated by Mark Aldenderfer, (University of California Merced and Visiting Scholar of the McDonald Institute). The tombs were only exposed to view in 2009 following a seismic event that calved off the façade of the cliff, having been originally carved out in prehistory from the soft conglomerate rock of a massive cliff face.

The dye analyses were conducted by Ina Vanden Berghe at the Royal Institute for Cultural Heritage.

Previous Story:
The Last Man on the Moon

Next Story:
What Lies Twixt Production and Reproduction: The Original Image