For those with the passion to create music, there is a problem with the way the rock legacy is being handled.

We know that this is partly due to the prospects in the music industry. However, there are also a great deal of pseudo-personalities, which makes it hard for musicians to communicate themselves. Within that context, we are sadly exposed to an inept, infertile generation that has a problem with blending the past with the present.

Whether this is the consequence of the troublesome modern life is open to discussion; but isn’t artistic creativity supposed to come out of chaos?

I don’t know if you need a rationale to make music but we are talking about Rock’n’Roll here. That has a strong attitude which recently seems to be forgotten about. It is almost the representation of perseverance, strength and intensity and the energy to make a stand without faltering. The Mercy House are one of the bands trying to achieve that.

Singer Drew Davies gives an account of the band and their artistic endeavour:

Trebuchet: The Mercy House’s debut album comes under the title of A Broken State of Bliss. What are the factors that interfere with ‘bliss’? Do they ever get better?

Drew: A Broken State of Bliss referred to two things. Firstly, how sometimes pain and emotions that may be deemed ‘negative’ can in fact be the most productive emotions for writing.

Well, pain is never completely unavoidable. We have all had a broken heart; anger and frustration would be other such emotions, I guess!Living in London they feel unavoidable but we learn to deal with them, I guess, which makes it better, no?

The second reference was more of a social commentary, it was referring to our emotions about London and how it seems to be somewhat of a fractured society interested more in material items like iPhones than social cohesion. I think that obstacle to ‘bliss’ is staying where it is at for the time being.

Trebuchet: So part of the creation comes from the emotions of being a Londoner? It mostly seems to be dark and serious material, though. Is that how the personalities in the band are naturally-oriented?

Drew: It’s strange, we are not all serious people all the time but we are intense, at times very, and that really comes out when we play. The rest of the time I don’t know we just get on with it! I know I become another person when I sing.

It is cathartic and I can fill my lungs and express how I feel using my voice, often this is a way for me to blow off steam.

It was never a statement or fashion choice to be how we are, we never dress it up and we are what you see. We just write about what we know…we don’t know much about fast cars and partying hard because we don’t have the money to live that lifestyle.

We have been unfortunate in some of our personal circumstances and that’s what we have communicated across. If people genuinely get that feeling and emotion, then it’s great because we’re not show ponies.

Trebuchet: Yeah, I think that seems to strike people when they first hear or see the band. There’s a powerful attitude, and that’s enriched by the lyrics. So, what about all those notions of ambition and decisiveness in the lyrics?

Drew: I think you’re right! Lyrically there is a lot of talk about ambition but also frustration…lots of frustration!! When there is no financial back-up or sponsorship, you have to fight hard to cut through the swathes of generic Rock’n’Roll out there, and it’s hard for people to see you are ‘different’.

When you’re not writing music to pander to an industry’s request, it can be more difficult to gain attention – but infinitely more rewarding. This is especially true when you’re not shouting “Look at me!!” with a gimmick.

We just want to break free from the industry’s stigmas and communicate our message; know yourself, know who you are and walk your own path.

I guess a lot of the time I can say in a song what I feel on the inside, sometimes a song is the only place you can say how you really feel.

Trebuchet: Oh yeah, young bands tricks! But, you are also a young band. How come your music happens to be more mature?

Drew: We have all lived a bit I guess and we have all had to be very determined to get where we are right now. We are young but I think our naivety has sadly been wiped away. A fair time ago, sadly!

At the end of the day that’s who we are, we don’t paint it on…one gig might be madness, the next one we might stare at you for 40 minutes; we just are who we are and we have never tried to fit into any box like that. Musically we all listen to things way out of the rock sphere of influence, people like to say “oh it’s like this or that…” really they don’t know shit, and often it’s reflective of 8 or 12 bars of music, not something as a whole.

The genre obsessions have to stop, I guess something is going right when everyone becomes the great ‘opinionizer’, but I think that’s what can be exciting about music, take something out of the box and try it contextually in what you do, rock music has become a bit inbred and new formulas spice things up.

Trebuchet: Having said that, are there any new bands or genres that you appreciate? I don’t know, there might be some that give you the sense that you have some comrades in music?

Drew: It’s hard to say at the minute, in rock and metal there are…bands like Turbowolf are interesting and exciting, both musically and in their performance…in our home city there are also young groups like Dumbjaw and Stereo Juggernaut, who, whilst not strictly related to us musically, definitely share our ethos and have similar elements about them.

At some point rock will turn around and rediscover itself, that or chew its own leg off to feed itself, like right now. We want a move away from the saccharine watered-down crap we get peddled, away from the cliché rock star, page after page of faceless bands with the same picture and style under one homogenized ‘genre’, the same bullshit coming out of their mouths.

It definitely needs to get some danger back and become more intense in the rock world, everyone is tired of pop rock or classic rock with a modern twist. Just be yourself and stop taking someone else’s lines out of their biography. I don’t know…we would welcome a new community, a group of individuals pushing boundaries and constantly looking to innovate and change, but it seems rock in London has lost that element it had in the 60’s and 70’s…maybe some other scenes can help to reinvigorate that. 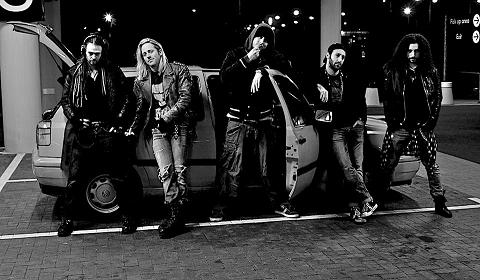 Trebuchet: Let’s talk about the live shows a bit. You did a successful UK tour, had sold-out shows here and there, and played festivals such as Hammerfest, Kanina and Bloodstock this year! What is it that your audience like about you and how do they put across their liking?

Drew: Right now we have only played a few festivals because we had to take a year out due to health issues within the band that had to be sorted out, which scuppered plans for last year. But whilst that held things back, we have come back now with a renewed determination to get our music out there and not to let things get in the way, unless it’s life or death…

We have played three London shows since coming back, two under our name which both sold out – which has been mad. We played the Purple Turtle in March and there was a queue around the block, that was crazy, but it felt very good to come back to. It might be the intensity of the shows which bring people back for more, maybe that we don’t know what is going to happen next either!? The songs themselves perhaps, I don’t know…but we just want to make our point and try to connect with as many people as we possibly can.

Trebuchet: As many people as you can… That takes us to the question of how the reception of the album has been…?

Drew: The album has been received incredibly well, some people have understood it and what its message is but some, unsurprisingly, haven’t…We have had amazing support in the press who have really got behind us and seen what we are trying to build…

Recent gigs have been great, our tour with Viking Skull was awesome, I think we all want to be on tour all the time as that is where our real passion and skill is, playing live and jamming it all out for the audience and giving everything…

Trebuchet: Well, coming back to ambition and decisiveness again, where do you go next?

Drew: Where do we take the band next?

Well, we have written a lot of material, some very different, expect the unexpected from us…those who have been there since the start have seen us experiment with many styles and I see that continuing. I think some other Yorkshire lads said it best, whatever you think I am, that’s what I am not.

Trebuchet: Great! Anything you would like to say to your fans and listeners out there?

Drew: Just keep spreading the word….make the point that real music can come back to the fore, listen to the songs and ask yourselves “Are these just notes or do the guys mean this?” That is what we are communicating, find the emotion and start understanding where we come from….

These are not songs written to be hits or to milk a scene for cash, we just write and that’s it, we always will, it is about being real, being yourself and putting that emotion into the art you create.

We want to communicate that message with as many people as we can, maybe music can still be about that expression?

All you guys make a difference.