The Fluid Sculptures of Richard Stone

Stone suggests almost endless textures and characteristics, requiring time and study to find the complementary partner to the artist’s vision 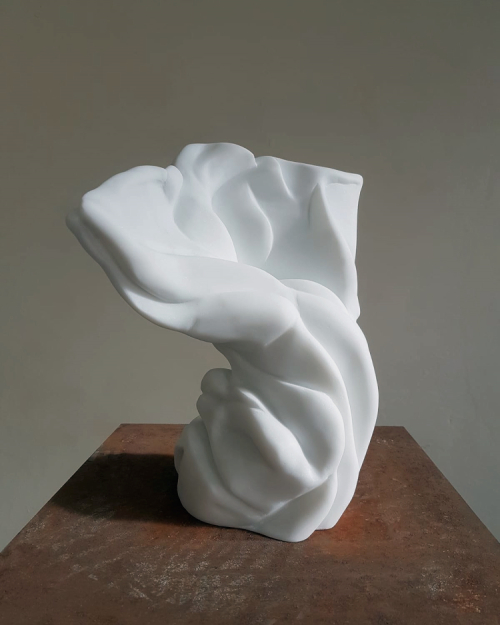 Works crafted from stone elicit an aura of art as an eternal entity. ‘This is set in stone!’ It has mass and majesty, sitting mightily on the viewer with the weight of expectation and history. The perfect artistic medium, surely? However, for the contemporary artist, stone may contain too much symbolic noise to convey intention without bias. It’s just too heavy, man.

Even prior to being worked, stone suggests almost endless textures and characteristics, requiring time and study to find the complementary partner to the artist’s vision. Stone is not a singular entity and even marble, the popular choice for artists, has different properties depending on its provenance and condition. While a symbol of permanence, stone also has a transformational quality; it ages and, in its aging, matures and deepens in meaning.

Early in 2020 Stone spoke to Trebuchet about carving his social commentary into the material of busts, banks, and dead presidents.

“I really like this idea that you take a flag to stake a claim to territory, but the flag becomes made of the material of the territory itself, which in this instance is the mountain. You have this object left which evokes this presence of a mountain and the elements, with soft ripples of the wind. It could be a flag that a person has put there, but this object is heavy, and it’s an interpretation of a flag, with an identity of its own as sculpture as well. It’s not a nationalistic thing, it’s not like saying ‘I surrender’; it’s transcending that and it draws in other influences, like literary narratives and inequality around flags, and it becomes universal. It’s almost, but not quite, like a magic trick, like a fluctuating cloak, that reveals and conceals its meaning. It’s the same with its making. It’s only when you see both sides, that you feel it is as sculpture. That’s when you go ‘oh, and this is stone’. It’s that moment.

I play with space in different ways, but it’s principally based on curves. A work like tutelar is literally an architecture of figurative curves and movement.

There’s light as a component too, what it does to you; it changes everything, doesn’t it? In a very basic way, the dark of night versus the new morning and all that stuff. But there’s something about the presence of fluidity and curves and movement with light that transcends, including time.”

Next Story:
Julie Mehretu at the Whitney Museum