Got some spinifex on ya, cock? Bio-Engineering Superthin Condoms

[dropcap style=”font-size:100px; color:#992211;”]A[/dropcap]ustralian spinifex contains a fibre which could lead to condoms being made from what one researcher terms ‘the Holy Grail for natural rubber’.

Those with a background in Christian theology, particularly Catholic, may experience a degree of cognitive dissonance on reading that phrase.

Suffice to surmise there won’t be an endorsement for Spinifex by Pontifex.

Fibres from the Australian native spinifex grass are being used to improve latex that could be used to make condoms as thin as a human hair without any loss in strength.

Working in partnership with Aboriginal traditional owners of the Camooweal region in north-west Queensland, the Indjalandji-Dhidhanu People, researchers from The University of Queensland have developed a method of extracting nanocellulose — which can be used as an additive in latex production — from the grass.

“The great thing about our nanocellulose is that it’s a flexible nano-additive, so we can make a stronger and thinner membrane that is supple and flexible, which is the Holy Grail for natural rubber,” Professor Martin said.

“We tested our latex formulation on a commercial dipping line in the United States and conducted a burst test that inflates condoms and measures the volume and pressure, and on average got a performance increase of 20 per cent in pressure and 40 per cent in volume compared to the commercial latex control sample,” he said.

“With a little more refinement, we think we can engineer a latex condom that’s about 30 per cent thinner, and will still pass all standards, and with more process optimisation work we will be able to make devices even thinner than this.

“Late last year we were able to get down to about 45 microns on our very first commercial dipping run, which is around the width of the hair on your head.”

Professor Martin said the benefits of the nanocellulose technology would interest latex manufacturers across the multi-billion-dollar global market.

“Rather than looking at increasing the strength, companies would be looking to market the thinnest, most satisfying prophylactic possible,” he said.

“Likewise, it would also be possible to produce latex gloves that are just as strong, but thinner, giving a more sensitive feel and less hand fatigue to users such as surgeons.

“Because you would also use less latex, your material cost in production would potentially drop as well, making it even more attractive to manufacturers.” 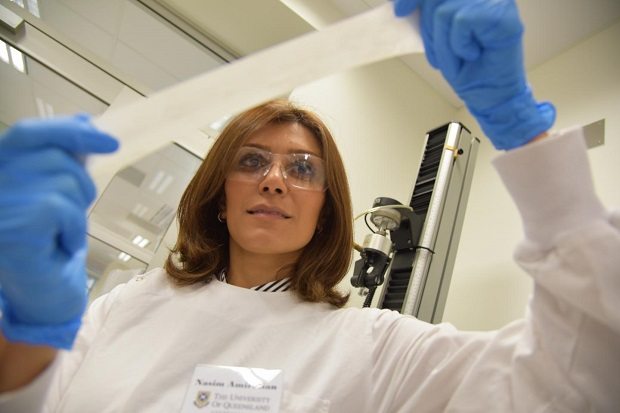 Professor Martin said spinifex had long been used as an effective adhesive by indigenous communities in Australia.

“Spinifex resins have been used traditionally for attaching spear heads to their wooden shafts,” he said.

UQ and the Dugalunji Aboriginal Corporation have signed an agreement to recognise local Aboriginal traditional owners’ knowledge about Spinifex and to ensure that they will have ongoing equity and involvement in the commercialisation of the nanocellulose technology.

DAC Managing Director Colin Saltmere said the technology provides an opportunity for the partners to establish themselves as leaders in the area of spinifex harvesting and processing and the supply of a range of nanocellulose and other spinifex-derived products.

“There are strong hopes of cultivating and processing spinifex grass on a commercial scale, bringing economic opportunities to the remote areas across Australia where it thrives,” Mr Saltmere said.

“We’re very excited by the prospects of commercialising the technology to provide an entirely new industry to regional Australia.” AIBN’s Dr Nasim Amiralian said the nanocellulose could be converted from spinifex using an efficient chemistry method.

“You would firstly hedge the grass, and then it would be chopped up and pulped with sodium hydroxide — and at that stage it just looks like paper pulp,” Dr Amiralian said.

“Then you hit it with mechanical energy to force it through a very small hole under high pressure to peel the nano-fibres apart from the pulp, into nanocellulose happily suspended in water and ready to add to things like water-based rubber latex,” she said.

UQ Vice-Chancellor and President Professor Peter Høj said innovation delivered its greatest impact when translated into tangible solutions that created positive change, and the spinifex project was a prime example.

“Research like this has great potential to make a difference in the fight against HIV and AIDS and other global issues in healthcare,” Professor Høj said.

“At the heart of our research at UQ, we are aiming to harness research insights to engineer the next-generation of products and solutions, build on global knowledge capital, and generate funding for further innovation.”

“This completes the laboratory-to-market lifecycle that can deliver benefits to millions, taking excellence to what we call Excellence Plus, and through that we aim to create change.”

Previous Story:
One of Us? Identity Politics and How Donald Trump Rides Them

Next Story:
All That You Fear is Gone (Headspace)