Uniquely evolved expression of abstraction in Caribbean art, Sunphase is a chance to see Aubrey Williams‘ rare works on paper Sometimes you have to reconnect with the past. In this rare exhibition of the ‘other’ work of painter Aubrey Williams we can see his influences and the syncretic innovations in abstract painting that he became famous for.

Concurrent with retrospectives at the Tate and the Barbican the October gallery have amassed a collection of his works on paper which deepen the story. In many respects as vibrant and as powerful as his canvases, these works have a loose freedom that show how he realised abstract painting from his perspective rather than just as purely an European venture. Political as well as lyrical, some of the Williams’ power is in describing abstract painting as a church broad enough to be acultural or even pan-cultural.

The freedom of working on paper seems to have allowed Williams the scope to expand his vision and test concepts and while not every work creates sparks for every viewer the delight is in finding the ‘deep cuts’ that reach further. Arguably, the works are more sensuous or violent or symbolic or less staged than the canvasses so we forgive their indifference towards gravitas for the life and elan they contain.

The work of Aubrey Williams has been increasingly recognised as a uniquely evolved expression of abstraction in Caribbean art. The exhibition Life Between Islands: Caribbean-British Art 1950s – Now at TATE Britain – which opened in 2021- has made Williams a focal point, juxtaposing seminal paintings alongside less familiar pieces. October Gallery presents Sunphase: Works on Paper, an exhibition of works by Aubrey Williams which will run from 17th March – 30th April 2022.

Having represented Williams for almost forty years, October Gallery builds upon the artist’s recent exposure by presenting a range of his works on paper complimented by a small selection of paintings on canvas. Williams’ paper works have not been exhibited as frequently as some of his more monumental canvases, but the works on paper provide a unique opportunity to view the ways in which the artist developed his ideas and techniques through a different medium. It is evident that these approaches he translated to his large-scale canvases. The works that feature in this exhibition span the artist’s career, from early gouaches in the 1960s—many of which have never been publicly shown — to several of his final evocative acrylics on paper. 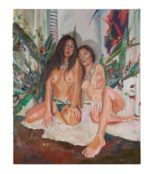 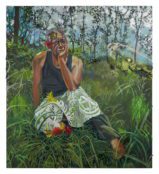