Know Your Moles: The Star-Nosed Mole

This week, it’s the star-nosed mole’s turn to garner some limelight.

And not because it’s difficult to tell if it’s coming or going.

A quarter-century of research on the star-nosed mole has unearthed startling insights into the evolution of animal behavior and the limits of physiology.

“Star-nosed moles are truly amazing animals,” said Kenneth Catania of Vanderbilt University, a neuroscientist who’s interest in the creature was first piqued while working as an undergraduate research assistant at the National Zoo in Washington, D.C. “Obviously they are among the weirdest looking creatures on the planet. But when I began trying to understand the star, the mole’s brain organization, and its behavior–that’s when things got really surprising.”

Here are some highlights:

They eat faster than any other mammal on Earth.

Star-nosed moles can identify and eat food (bugs, mostly) in less than two-tenths of a second, taking a mere 8 milliseconds to decide whether an item is edible or not. They perform this feat in part due to the extremely efficient operation of their nervous systems, which convey information from the environment to the animal’s brain at speeds approaching the physiological limit of neurons. It also helps that…

…Their star is the most sensitive known touch organ in any mammal.

The distinctive star organ on the mole’s snout contains more than 100,000 nerve fibers–five times the number of “touch” fibers in the human hand, all packed into a space smaller than your fingertip. “The star skin is so sensitive that we have not been able to determine the lowest threshold for activating neurons,” said Catania, adding that studying the star could provide insights that improve our understanding of the human sense of touch.

From a neurological perspective, their sense of touch mirrors our sense of sight.

At the center of the star organ is a small area called the touch fovea that the mole uses for all of its most detailed explorations. Although the mole’s actual eyes are essentially useless, the touch fovea is neurologically organized in a way that is strikingly similar to the organization of a highly developed visual system. As the mole moves through its environment, it constantly shifts the star to reposition the fovea on areas of interest, just as we shift our eyes while reading the words printed on a page, for example. “These parallels suggest there are common strategies by which evolution ‘builds’ high-resolution sensory systems, whether they are based on sight or on touch,” Catania said. 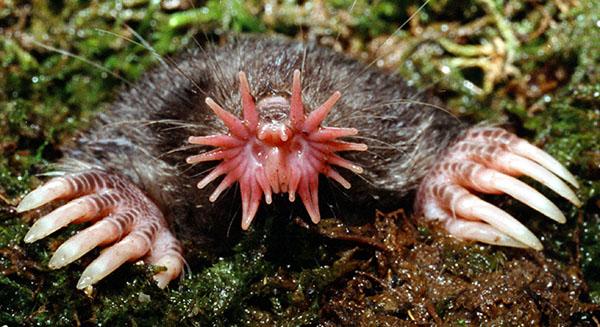 If you use the right dye, you can literally see which parts of their brains map to which body parts.

Scientists create maps of the brains of humans and other animals using a painstaking process of trial and error to determine which areas of the brain control (and receive stimuli from) various parts of the body. In star-nosed moles, you can actually see the brain maps with the right kinds of cellular stains. “You can basically see a ‘star’ in the mole’s neocortex,” said Catania. “That allows us to make all kinds of detailed measurements and neural recordings that are very difficult in other species.”

Also, they can smell underwater. And their front legs are shovels.

Star-nosed moles are like a poster child for extreme evolutionary adaptations. Using their shovel-like front limbs to tunnel through soggy, marsh-like areas, the moles often dive and swim for food. Star-nosed moles have been shown to blow bubbles into the water and then re-inhale them through the nose in order to sniff for prey, making them the first mammal known to smell underwater.

Star-nosed moles are not uncommon, just uncommonly seen, said Catania. So keep an eye out–what you find just might surprise you.

Previous Story:
Are You Getting Enough? (Sleep): Sleep Patterns and Sounds

Next Story:
Shake, not Spin: How To Interpret Political Debates