A comprehensive collection in which to get lost and marvel at a time when whatever was plausible was seen as achievable. 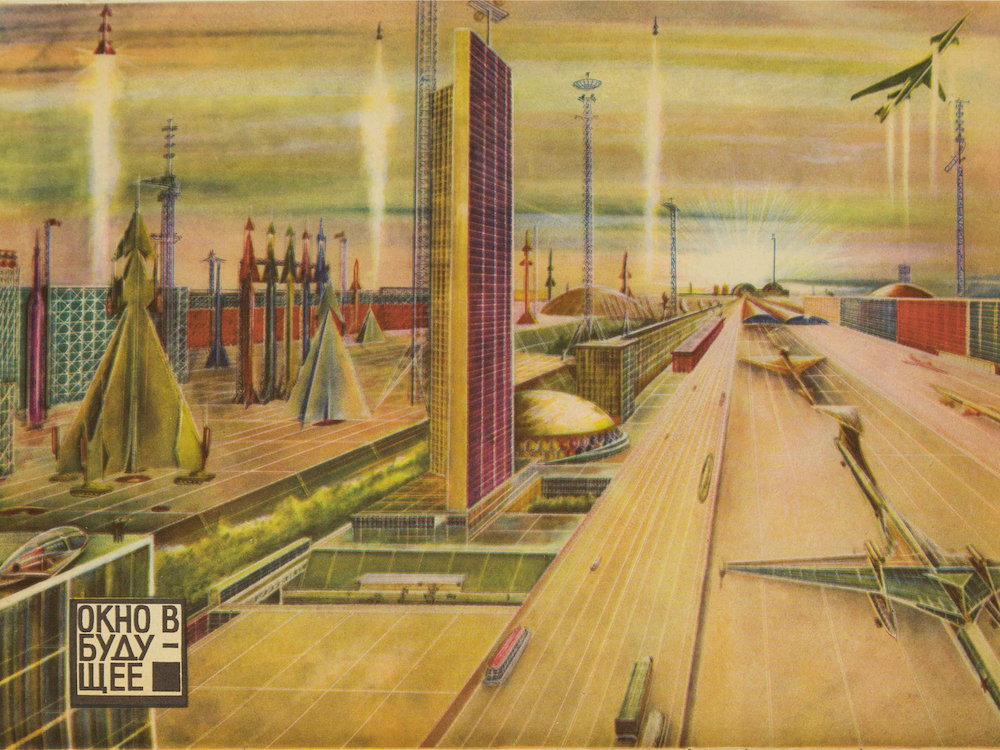 [dropcap style=”font-size:100px;color:#992211;”]T[/dropcap]he interplay between fantasy and science has frequently led to great strides in popular culture; Soviet Space Graphics, coming out of the unique environment of the former USSR, provides for a particularly interesting seam which has a genuinely distinctive landscape all of its own.

In the introduction to this compendium of twentieth century science and science-fiction artwork, author Alexandra Sankova describes the all-encompassing, forward-looking, endless questioning which categorised 1950s/60s attitudes in the USSR towards space travel; this of course gave way to the fractious ‘space race’ between the US and the USSR, but before that point, space travel’s possibilities instigated a new kind of popular science, aimed at all ages and all walks of life. Ideas about accessibility, the range of new developments and the scope of Russia’s political might inspired notable titles like Science and Life, and Knowledge is Power. As the timeline of events in the USSR came to encompass great milestones like Sputnik, Laika the dog and the successful space voyage of Yuri Gagarin, it must have felt more and more like life imitating art, and no doubt these successes helped to stoke the creation of more public interest and even more appetite for this kind of reading material.

The rest of the book consists of colourful examples of the art which underpinned titles like Science and Life. These are fascinating; there’s a real benefit to seeing these illustrations as an outsider, as (in these exhaustive qualities at least) this is still an unknown and unappreciated visual culture in the West, as alien in its own way as the cosmic sights it attempted to capture. Taking the form of diagrams, sometimes to blueprint-levels of detail, speculative art (what could be achieved) and illustrative art (accompanying anything from sci-fi fiction to scientific articles), the images are very striking and imaginative, going so far as to show human cities in orbit around different stars — ah, the joys of boundless optimism. The visuals are all helpfully captioned, too, with attributions and descriptions of what each artwork depicts.

The book is chaptered and these chapters include: Exploration; Cosmic Pioneers (chock-full of industry and heroism), Future Visions (which is probably the most intriguing section of the lot) and finally, Alternative Worlds. Then there’s one last section containing information on the magazines, biographies of notable contributors, and an index.

It is highly unlikely that a collection of this nature will be seen again in such a comprehensive format, or curated with this evident knowledge and interest. This is a good book in which to get lost, marvelling at a time when whatever was plausible was seen as achievable. In that respect, the attitude behind this hitherto-unknown world of science and culture is every bit as charming as its art.

Soviet Space Graphics: Cosmic Visions from the USSR by Alexandra Sankova in collaboration with the Moscow Design Museum is published by Phaidon on 20 March and retails at £24.95 (phaidon.com)