When we write our songs, we don’t really care if the riff is heavy metal, thrash or death or black metal or whatever, we just care if it sounds good. Skyforger interview 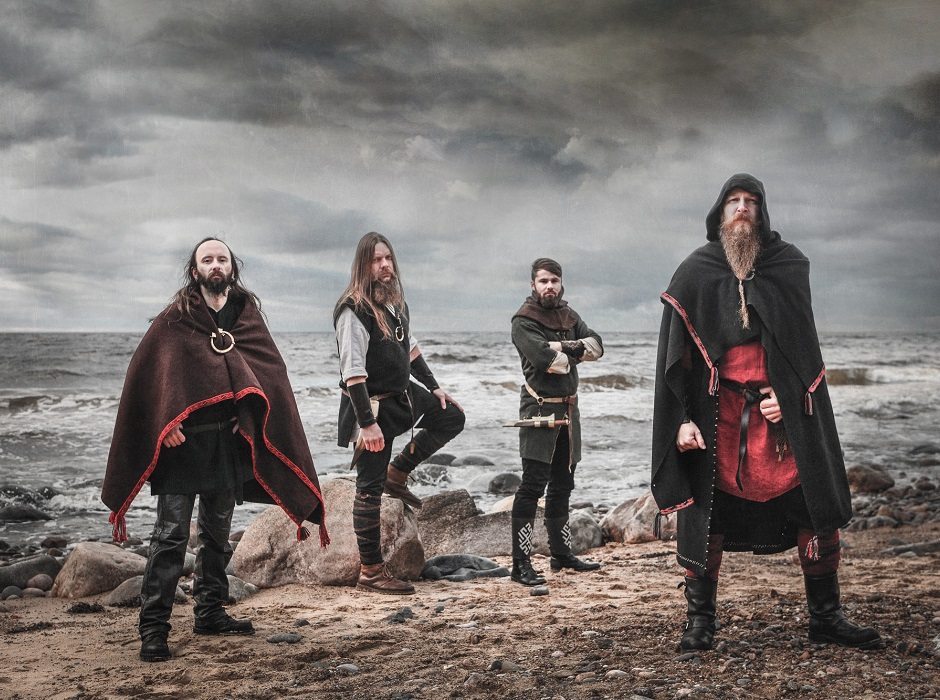 [dropcap style=”font-size:100px; color:#992211;”]I[/dropcap] freely admit to being a massive Skyforger fan, so it was with great trepidation that I finally got around to interview the Latvian folk metal stalwarts’ lead man, Pēteris Kvetkovskis.

(Or ‘Peter’ as he doesn’t mind being called.)

As it happens, Peter was a very laid back and sanguine fellow, prone to laughing in a jolly fashion and being generally pleasant, so I wasn’t as star-struck (or mildly stalker-y) as I might have been. So, time being short, I first asked him about the band’s first London gig in a while, to promote their new album Senprusija, which took place at the Electrowerkz in May of this year.

“It was quite OK”, Peter demurs, “but I was not in the best condition. During that tour I felt very lousy and not so good, especially in Ireland” he said, repeating the same apology he made onstage that night. (Not that anyone noticed any ropiness on his part.) The tour itself was a series of dates at a variety of smaller venues, with the guarantee – Peter notes – of people always turning up.

Senprusija itself is a tribute of sorts to the Old Prussians, the original Baltic inhabitants of Prussia until the Germans happened, subjugating, Christianising and assimilating the Old Prussians into oblivion. “They’re a bit part of Baltic heritage”, Peter explains, “but are now largely forgotten.”

This is not helped by archaeologists preferring to excavate sites left behind by Scandinavians in the area rather than the original inhabitants. Peter is honest as to why this might be so. “They didn’t conquer any big lands and they played no role in grand historical events that affected the rest of Europe, so I guess it’s to be expected that they are forgotten.”

Which is a roundabout way of saying they just weren’t big enough twats on the European stage to gather much attention, unlike the neighbouring Germans and Russians (or us), and their (and our) ASBO-related antics throughout much of history. Underdogs, then?

“Yes, of course”, Peter says. As he often does with his lyrics, he undertakes a great deal of historical research on his chosen subject, though only really writes the words once the music is agreed “and then I write down what it inspires in my head.”

Senprusija is also significant as it was published through the band’s own label, Thunderforge Records. The deal with Metal Blade Records had died a death for one reason or another – but as Peter thinks, “the time of labels is coming to an end because of the Internet and piracy. Most people listen to music online these days.” Smaller, band-owned labels, however, can still carve a niche.

The band are well-placed to do it themselves – having a contact who just so happens to be a sound engineer helps no end, with the design and manufacture of the packaging out-sourced elsewhere, but not without the extensive liner notes Peter provides for each song, putting it into its proper historical or folkloric context.

“This time I thought that I should write down the notes or stories behind these songs. I guessed this would be more important than just the lyrics. If you just read them you might not know what they’re about. That’s why I did it this time.”

While Peter and the band didn’t put too much thought into it, the end product was certainly polished. “It’s like an experiment for us”, he booms with laughter. The main reason for the label’s existence is solely practical. “It’s not a serious label – we’re just selling CDs”, Peter explains. “But in order to do that, we needed to register it as a business.”

Has the band’s dipping a toe in market capitalism been a success? “I know that we’ve sold some CDs at least, HAHAHAHA!”

Peter has a similarly blithe view of the album itself, though it’s certain he poured his heart and brain into it, as usual. “That’s hard to say”, he replies when I ask what his favourite tracks are. “They are like a child – I love them all!” Though, as he adds as a caveat, “We record and rehearse and play them so many times that I just don’t want to hear them any more. I don’t listen to my own music at home.” So a lot like kids then? In any case, the fans seem to have responded well to Ramava, a slow but catchy number sung in Old Prussian. I happen to agree.

Moving onto Skyforger’s discography as a whole, the band has in its time branched with covers of Soviet era Latvian metal bands Opus Pro and Livi. Peter points out that they are still pretty big in Latvia, so it wasn’t like they needed the publicity, but I wondered if it wasn’t like the archaeology of sorts that Senprusija does, where a history overlooked by outsiders is brought into stark relief. 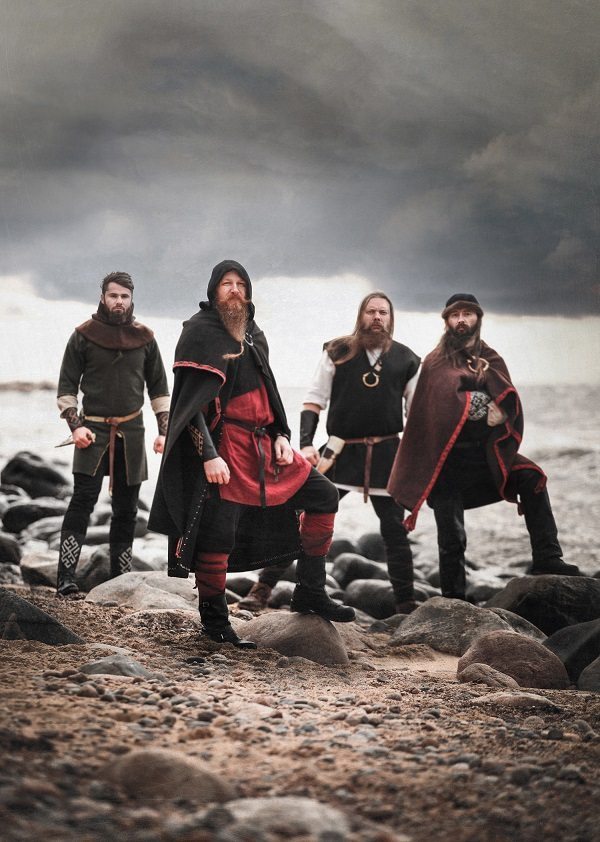 It wasn’t always like this, of course. ‘When we were young to tell the truth we laughed at them because we were into thrash and death metal’, Peter admits. ‘But when we grew up, we went, “well, maybe they weren’t so bad…”’.

This of course leads us onto those halcyon days as the Great Soviet Experiment collapsed into its own armpit. “They were shitty times” Peter deadpans. And not just for the obvious social and political reasons. Having a politburo on your arse all the time made being a metaller rather hard.

“It was so hard to get those records” Peter explains. For young Latvians at the time, this music really was underground. “They did start coming in though, thanks to some sailors who had the chance to buy and smuggle them in from abroad. And then there were others who copied the LPs onto cassette. and you just needed to find these people and buy it off them. Of course once that happened, everyone was just copy-copy-copying! HAHAHAHA!”

If listening was hard, playing was harder. For budding young musos like Peter and friends, the only guitars available were knock-offs of American and Western models, made by local carpenters. They must have been determined – “Yeah, but when we were young, no one really thought too much about it. It was like, ‘Hey! Let’s try to copy all these foreign bands!’ It was like a re-enactment for us. We’d imagine we were on the same big stages, like rock stars, in our own world.”

I wondered to myself if Peter’s blasé approach wasn’t rooted in a kind of defence mechanism, where you had to make the best of situations regardless.

“It was an illegal business, but people were just happy to have something that looked and sounded like those things over the border” he explains. In hindsight, it seems unbelievable to him, but this was the reality that he and his fellow metal fans accepted on a day-to-day basis, where even getting your hands on some Western bubblegum made you the height of coolness.

“It was like – WOW!!! HAHAHAHAHA!” Peter says, incidentally giving as good a summary why the USSR went tits up as anyone else has. “In some ways it was funny, but in others, you could see how people were brainwashed and oppressed, and it wasn’t much fun” he concludes, laughing once again.

One recent change in the band has come in the departure of the band’s in-house folk instrumentalist, Kaspars Bārbals. This was less down to the usual ‘creative differences’ and more due to the way Skyforger itself has evolved. “Kaspar was still in the band when we started to write Senprusija, but I began to see that there wasn’t that much for him to do.

Peter endeavoured to find things for Kaspars to do, writing in sections specifically for him in the band’s 2010 album, Kurbads. But all this did was lead to complaints from some fans about how there were too many folk interludes. Peter conceded the point; besides, a glut of other folk metal bands, all engaging in the same traditional instrumental schtick, meant that Skyforger had to differentiate itself somehow.

“In the end, Skyforger is a metal band”, Peter concludes. Nowadays the band replaces its folk segues with chanting from the entire band or guitar sections. It also made playing live a lot easier. “There was always a problem with having folk instruments onstage – they’d constantly be screeching and giving off feedback. Now, it’s easier! HAHAHAHAHA We don’t feel like we’ve lost something or whatever. It still feels the same.”

A similar process took place with the band’s sound, which started out with a noticeable black metal tinge, as 1998’s Kauja pie Saules demonstrates, but has moved away towards a broader but much more distinctive metal sound. Again, a need to stand out took hold. “When we write our songs, we don’t really care if the riff is heavy metal, thrash or death or black metal or whatever, we just care if it sounds good.

“And then we try to mix another riff together with that and somehow it all comes together naturally. We don’t think about writing in a particular genre – it just happens that way”, Peter concludes. Perhaps the big irony of Skyforger, a band with one eye forever fixed on the past, is that it has continued to evolve, and will carry on for the foreseeable.

For that, though, Peter needs to ask you a favour. “As said, we recorded and manufactured our own CD, so if people buy it, we’ll be able to afford another recording session! Hahahaha. I’d also like to say a big thank you to all the people who come to see us when we play in England. We appreciate it so much.”

Hint-hint, as they say.