Shaky Kane burst onto the scene in the late 1980s with subversively dazzling artwork for Deadline comics, Revolver and Judge Dredd Megazine, then mysteriously disappeared. 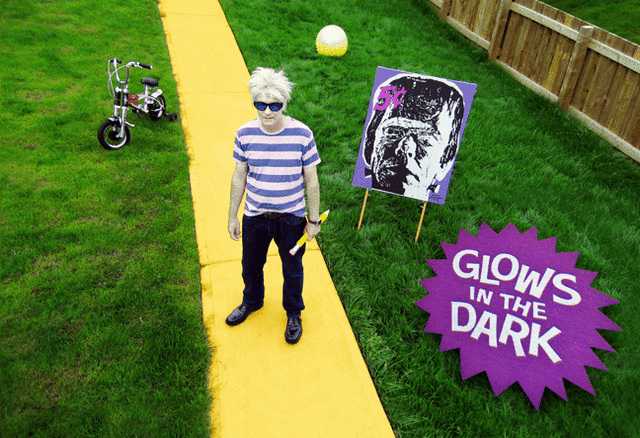 SWP: I bumped into your TBC collaborator David Hine at The London Super Comic Convention. He said to ask you about the ‘wilderness yeacrs’.

Shaky Kane: I pretty much gave up on drawing comics for the best part of fifteen years. I’d moved away from the capital and had settled in the West Country. Comics, certainly as I drew them, didn’t seem a viable way of getting by. I rarely came across anyone with any interest in comic books, let alone anyone willing to finance such ventures. Even the self-published route proved a pretty pointless exercise. What are you supposed to do with the books even if you scrape together the funding? You can’t personally hand them out.

I drew them, didn’t

I did get involved with a local publisher at one time. We put together two issues of an oversized comic book magazine under the banner Black Star Fiction Library. I got paid, but they arrived unannounced at the newsagents and pretty much went unnoticed.

It’s all down to distribution, and Diamond has got that tied up.

There really wasn’t a comic scene in this country at that time. 2000 AD was still struggling on, but that’s a very niche market and the editorial decisions at the time excluded anything but a very well-tried dark fantasy art style. I’m more pop, psychedelic. It was the internet which opened up things for me again. 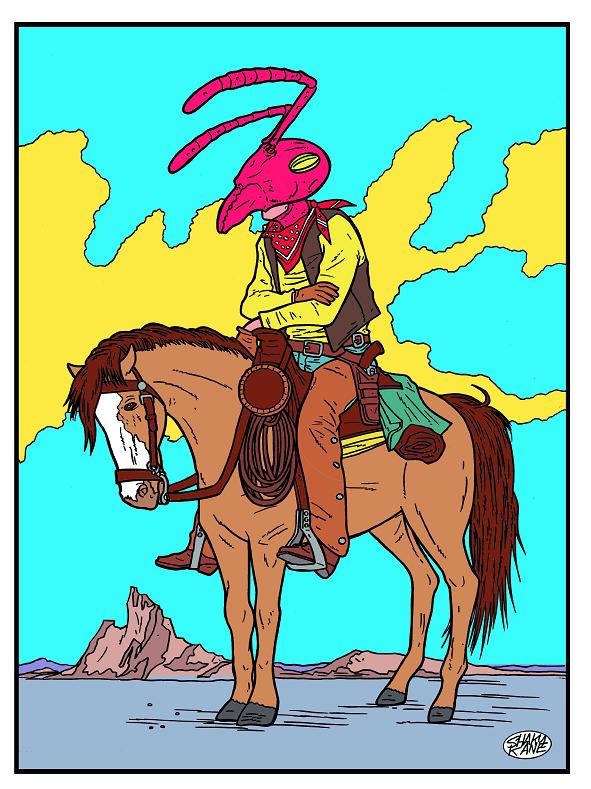 Things are much healthier now. I can sit in my front room studio in Devon and communicate with any publisher in any corner of the globe. You haven’t even got to mail the artwork; it’s all electronic jiggling around in some unimaginable form via cables. I don’t understand how it all works.

SWP: In TBC David is credited as writer and you as artist. How does this work in practice?

SK: I’ve known him for years; we’ve got the same cultural, for want of a better word, history. Certainly I can come up with ideas, but to make it work it needs the discipline of storytelling, which is David’s forte. I see things as pictures, they just come to me readymade, which is handy I suppose if you want to make comic books. 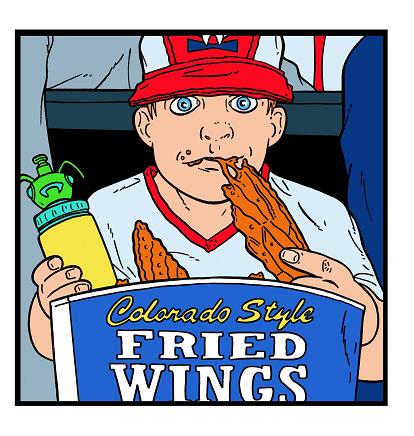 SWP: My first experience of meta-fiction was when Stan Lee and Jack Kirby attended the wedding of Susan Storm and Reed Richards in a Fantastic Four annual. Since then Grant Morrison, Dave Sim, Neil Gaiman and a number of other creators have stepped inside their own pages. In TBC you have taken this device a stage further by completely integrating yourself and David into the narrative. How does it feel to cross the line?

SK: I wouldn’t like to imagine I’m very much like the Shaky Kane depicted in Bulletproof. He’s a morph, if you will, of various totally un-researched archetypes. He’s a glimmer of reality, just a glimmer.

SWP: Reality is further confounded by your use of the Shaky Kane persona as an alter ego. Do you want to reveal your ‘secret identity’ to the Trebuchet readers?

SK: No problem what so ever. You’ve only got to have access to the internet.

SWP: In the fulsome background material included with your recent Elephantmen work the creator, Richard Starkings, mentioned the speed of your artistic response once the initial idea had been discussed. I found the same thing when you bombarded me with images to promote my new musical outfit. How many pages of art do you produce in a day? What are the current tools of your trade? And what the hell is SHAKY COLOUR?

SK: The crazy part is I never actually draw comic book pages as such. I take on each panel, even details of a panel as an individual drawing exercise. I put it all together like a cerebral jig-saw puzzle. Once I’ve drawn the requisite images I scan them into the PC and lay them out on the page template, cropping the images to fit. Even the smallest panel is drawn full A3 size. It works against any logic, but that’s the only way I can manage it.

I’ve gone out and bought Bristol board art pads before, with a mind to produce complete pages which I might be able to sell, as a sideline. It never works out. I scrawl away until I hit on the winning image. 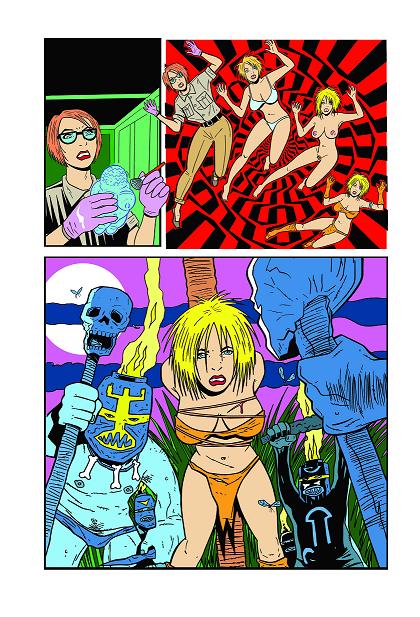 SHAKY COLOUR has got its own look. Something that comes of working with the untrained eye, I like to really burn the colour, I like the look of cheap mass produced goods. I’m not a fine art guy at all.

SWP: My own feeling is that music production has severely declined since the computer became the dominant tool in the proceedings. I found a quote by Golden and Silver age artist Joe Kubert that echoes my thoughts in relation to the comic book field:

‘Now that you can correct mistakes, because of the sense that it’s not irrevocable, you become less sure of the stroke you’re putting down. If you give (the artist) a tool where he can take it back, you’re losing an immediacy and the worst part of it is that the artist himself suffers. If you start worrying about one stroke, you’re done.’

SK: This sounds exactly the position I’m in. I know there are a lot of drawing tools out there. You can scan in a picture from Swimwear magazine and layer it to look like Sue Richards of the Fantastic Four, but I like comic books to look like somebody sat down and drew them. I like the line you get when you put pen to paper. I work from a memory of a specific time in American comic book history (the silver age).

you get when you

Jack Kirby once said that you don’t draw with a pencil – you draw with your head. It’s the familiarity with such a basic instrument. A pencil and a cheap drawing pad – those are the only tools you need, that and an idea bursting to get out the graphite running up that stick of wood.

SWP: Since your illustration work for my new musical outfit you have been invited to work on a tour poster for The Jon Spencer Blues Explosion. I am aware that you have worked for the NME and previously illustrated covers for indie bands – are you now considering offers from the likes of Ed Sheeran, Coldplay or Adele?

SK: It’s great to be asked. It’s always a relief to be asked to put together a single image as opposed to a 22 page strip. You can see the project through rather than having it hanging over you. Come up with something neat. Jon Spencer sent me a whole stack of albums just the other day, and what great albums they were. Sort of band you’d want to be associated with.

Likewise The Presence TM, they both come from the same place my drawing comes from; a lifetime’s obsession with the sort of things most right minded people would shy away from. That’s a healthy place to be.

SWP: Comics are all about the burning promise of the next issue and their current media dominance is connected to the hunger of the modern audience for never-ending narratives via movie serials, television series and fan fiction. Do you intend to return to the characters from Bulletproof Coffin or do you have new vistas in mind?

relief to be asked

SK: In a way Bulletproof Coffin was too self-contained, to follow up. The first book took the reader thru a series of events which reached a logical, or even illogical, conclusion. Disinterred was a return to themes suggested by the incidents in the first series.

I’d personally like to produce straight superhero / detective stories with a neat twist. I don’t know how David envisions the characters beyond Bulletproof, it would seem a shame to see them shelved. 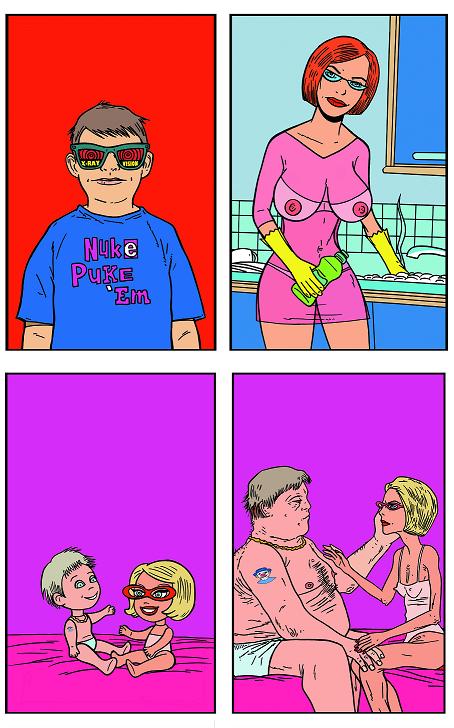 For my own part, I’m working on a project, written by David Quantick, who was also an NME contributor during the 80s. This one’s entitled: That’s Because You’re A Robot. I’m also six pages into Cowboys and Insects, again scripted by David Hine, which is going to run in David (V for Vendetta) Lloyd’s online comic Aces Weekly.

As you may have noticed I make a point of only working with collaborators named David.

Images all Shaky Kane, except for artist photo by Steven Cook