Aborted prove that the sicker the theme, the more intense the impact

[dropcap style=”font-size:100px; color:#992211;”]E[/dropcap]xtreme metal is not for the faint hearted or those who prefer their music to have less of a sting in its delivery….

Well, I say sting, it’s more like a whole swarm of wasps stabbing you to a poisoned death.

Currently, no other band provides anything as extreme as the intense quintet from Belgium, Aborted.

My history with this band goes back to 2007 when I was embracing more and more extreme metal. I was seeking rawness but in a controlled and well structured way. Aggression which was meticulously channeled into the sound to deliver a full-on sonic assault. Aborted provided that. Having my first experience of them in a live setting, I was blown away and was quick to acquire their current album at that point in time: Slaughter and Apparatus: A Methodical Overture. 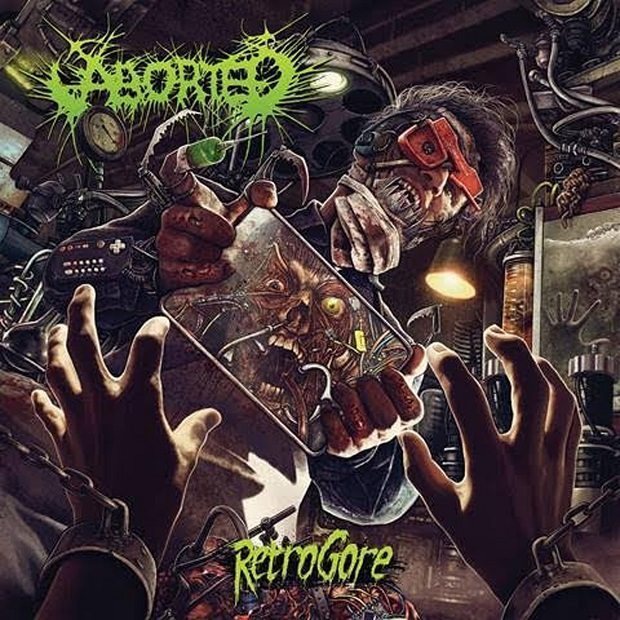 Fast forward to January 2016 and there is yet another Aborted release – a six track EP to celebrate 20 years of extreme metal: Termination Redux. Despite its short length it was a game changer, setting the standard for death metal releases this year and, on the subsequent tour which followed it (featuring Canadian groove laden Death Metal machine Kataklysm and the symphonic death metal delivery of Greek outfit Septic Flesh) Aborted really brought the intensity. Announcing that in April, Retrogore would be unleashed sent shivers down many spines.

With a solid taste of things to come musically, and a fantastic PR campaign using the band in cult horror and sci-fi film posters to draw attention to the aptly named Retrogore, anticipation for a release this year has not been higher.

The opening sample track “Dellamorte Dellamore” has a classic feel to it, with the swing era feel underpinned by some menacing breathing which accelerates in pace until it smashes right into the title track, “Retrogore”. The blistering pace, furious edge, intense sound and delivery hits you instantly. Technically precise riffery and blasting drums sound hectic as hell, but this tightly controlled musical chaos is timed to perfection.

Massively crushing and vocally intense with its harsh growls and guttural grunts, this track comes across as a statement of intent. Even when it eases off a fraction towards the middle, the ominous and sinister sound sinks its claws and the punishing breakdown, fuelled by heavily detuned guitars and precise rhythmic blasts, keeps the intensity up with a solid pounding groove. Shifting into the lead section, the fluid sweeping licks and rapid flurry of notes comes across clearly with no muddying from the underlying rhythm. As it crashes into the end section of the track, the brutal groove stays ’til the last beat. A fine example of controlled chaos.

“Cadaverous Collection” retains the intensity as it follows up. A masterclass in punishing percussive assault, the drums are phenomenal, switching in and out of blast and heavy double kick sections with minimal fuss, providing a solid foundation for the intense musical delivery over the top. Stabbed riffs which shift about in a familiar feeling pattern, rife with a frantic sense of ferocity mirror the intensity of the opening track. The best way to describe it is as an insanely heavy combination of At The Gates and Necrophagist – full on death metal riff groove with intricate and complex melodic elements.

Once more, it pulls back for another ominous breakdown with sinister vocal work and pounding bass and drums. The low buzzing of the guitars adds some thunder and even when it slightly brightens for a mini-arpeggio section, it smashes back to life with some furious riffs once again. With a hammering feel, the groove is relentless, smashing its way through everything in its path (leaving an army of death metallers in its wake, furiously headbanging). Fading out, the track ends in a chilling spoken sample about the infamous killer Gary M. Heidnik talking about how he electrocuted and starved his victims before feeding one of their bodies (mixed with dog food) to the remaining captives. Horrid stuff, but in death metal, the more sick and twisted the theme, the more intense the impact of the track based upon it.

“Whormageddon” comes right back with more furious blasting. Punishing riffs delivered with clinical precision and thunderous bass back up the scathing vocal assault. Though seemingly short, the verses feel like a prolonged assault and the slower, groove chorus (with some venom in the vocals) hits hard. It explodes into a frantic paced section with sinister buzzing guitar lines before it descends into the lower end of the musical register with a pounding breakdown.

Heavy as hell and crushing everything, it smashes on at a steady pace, building to the slick guitar solo. With a big wailing bend and some nimble runs and harmony licks the solo is short, but it provides the chance to switch back to the rapid pace and intense section before a final chorus.

“Termination Redux” is a familiar track, given how it was on the EP released earlier this year. Rich with crushing grooves, brutal riffs and relentless blastbeats, it takes little time in getting into gear. A full-on furious, almost chaotic, mix of intricate riffs, venomous vocal delivery and pounding blasts lays the main foundation of the track and in the way it shifts feel as it goes on, slipping between different breakdown sections but never losing the heaviness and intensity, it is a classic example of what this Belgian metal machine are capable of.

Live, it is even more intense. The ominous mid-section with sinister synth moments and raspy vocals creates a wonderful sense of unease, and the lead section really screams out whilst being melodic, coming across almost like Heartwork-era Carcass in parts. “Bit By Bit” opens with with another sample, this time from Boris Karloff and Bela Lugosi’s iconic film The Black Cat and the infamous skinning scene. On the words, ‘Slowly… Bit by bit!’, it explodes to life with a pounding and powerful onslaught of riffs.

Thundering drums and rapid-fire blasts drive this precisely controlled rhythmic assault and even the intense vocals cannot distract from the magnetism of the instrumental sections. Filled with various breakdown and blasts, the insanely heavy guitars and bass steamroll over all in their path and even the powerful solo fights for attention. The onslaught gets more intense as the intricacy of the riffs increases and sinister synth noises augment the build section. To end, it explodes into that classic death metal, rapid-fire blast and pummelling guitar attack.

“Divine Impediment” continues the sinister. The ringing guitar melody over the rhythmic assault creates a wonderful contrast, both can be heard clearly before it explodes into the ever familiar and hard hitting riff section. Switching from furious blast and intricate riffs to the ominous delivery, the drums never seem out of place, able to instantly switch from pounding and controlled to blistering rapid/chaotic any form of transition. The furious pounding and rapid rolls typify the astounding rhythmic prowess of the band. Even the short lead section with its fantastic fluid delivery does little to overshadow or take focus off of the masterclass in death metal drums. Even as the track winds down for the end, the rhythm still stays intense. A true display of stamina and ability from the drummer.

“Coven Of Ignorance” starts off once again with intensity and ferocity. The sheer aggression in the musical delivery gives a threatening atmosphere to the track, much like the rest of the album so far. Full of powerful death metal groove and intensity, the track surges on, taking no prisoners in any way, shape or form. The odd melodic lead lines do bring a slight sound of progression to it, but the sheer ferocity of the rhythm component is just too powerful to be overlooked. Surgically precise and thunderously heavy in tone, it marches on, hitting hard with plenty of headbang-friendly sections.

The slick lead trade off in the middle of the (devastatingly heavy) breakdown goes well with the intensity, and even when it slows down to a crawl-like pace, it fades out into a sample about the pointlessness of other people and the inevitablility of dying alone, before a quick refrain rounds it off.

Coming into the final run of tracks, “Forged For Decrepitude” is the shortest song on the album. Clocking in at under three minutes, it is a compacted dose of explosive energy and chaos, laden with the formidable rhythm section and scathing vocal assault. Riff after riff keeps coming, but the subtle arrangement of the guitars in some sections, giving an almost symphonic edge, is sublime.

“From Beyond (The Grave)” opens up slowly compared to the majority of this album. Laden with heavy grooves initially, it builds to an explosive burst before slowing again temporarily. Alternating between crushing chugs in the verse and blitzkrieg assaults in the chorus, the track keeps you on guard, letting you relax just long enough to smash into you once again with fury and anger.

Closing the album is “In Avernus”. Building in volume from an ambient sample, it descends into a thunderous groove section. Ominous leads add a touch of evil to the sound and, as always, the harsh vocals raise the tension. Exploding with energy when needed, the steadily-paced number keeps everything locked in place, letting nothing slip and sustaining the level of intensity which started with “Retrogore”. As the final breakdown section comes in, with the jarring, sinister lead sound and rumbling bass to end the song, you can safely breathe normally again….

The experience is over, you survived it.

Previous Story:
Fields of the Nephilim Celebration of the Solstices