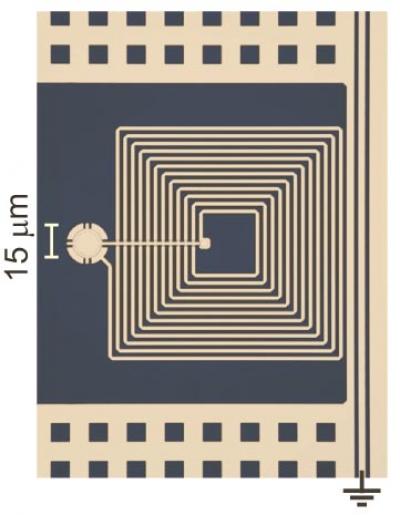 Not that kind of drum, though “noise” is still an issue.

One of the oldest forms of computer memory is back again—but in a 21st century microscopic device designed by physicists at the National Institute of Standards and Technology (NIST) for possible use in a quantum computer.

The NIST team has demonstrated that information encoded as a specific point in a traveling microwave signal—the vertical and horizontal positions of a wave pattern at a certain time—can be transferred to the mechanical beat of a micro-drum and later retrieved with 65 percent efficiency, a good figure for experimental systems like this. The research is described in the March 14 issue of Nature.*

“We believe the mechanical drum motion could be used as a kind of local memory for quantum information systems,” NIST physicist Konrad Lehnert says. “These experiments live at the boundary between classical and quantum systems.”

The technique harks back to “delay line memory” that was used in some of the earliest electronic computers, including NIST’s own 1950s computer, SEAC.** Those devices were fairly simple. They temporarily stored values during computation in the form of acoustic waves traveling down a column of mercury or other fluid. By contrast, the NIST micro-drum memory would exploit a mechanical form of quantum physics.

NIST scientists introduced the micro-drum in 2011.*** The micro-drum is embedded in a resonant circuit and can beat at different frequencies. By applying microwaves at specific frequencies, researchers can achieve rapid, reliable exchanges between the circuit’s electrical energy, in the form of microwave photons (light particles), and the drum’s mechanical energy in the form of phonons (units of vibration).

An applied microwave tone can cool the drum down to its lowest-energy ground state, with less than one quantum of energy—the quantum regime, where the drum can store and convert quantum information. The same interaction transfers information from microwaves in the circuit to the drum, while converting the drum to a temporary state beating at the received frequencies. A key innovation in the latest experiments is the ability to rapidly switch the circuit-drum interactions on and off based on the intensity of the applied microwave tone.

live at the boundary

The drum has certain practical advantages as a quantum storage device. Its size and fabrication method are compatible with the devices used for chip-based superconducting quantum bits (qubits), which might be used to represent information in quantum computers. The drum also can retain quantum information for about the same length of time as superconducting circuits can. Quantum computers would rely on the rules of quantum mechanics, nature’s rules for the submicroscopic world, to potentially solve important problems that are intractable using today’s technology.

In the latest experiments, the quantum information is stored in the amplitude (vertical position) and phase (horizontal position) of the microwave pulse, or waveform, similar to the way some cellular telephones work, Lehnert says. Although this is a classical approach, the experiments are quasi-quantum because the fluctuations, or “noise,” in the measurements are quantum mechanical, Lehnert says.

In 8,000 tries, the research team was able to prepare, transfer, store and recapture information 65 percent of the time. This is a good level of efficiency given the early stage of global research on quantum memories; competing quantum memory devices include special crystals and, in nonsolid systems, atomic gases. In the future, researchers plan to combine qubits with the micro-drum, which could serve as either a quantum memory or as an interface between otherwise incompatible systems such as those operating at microwave and optical frequencies. The advance may benefit fundamental physics experiments, quantum information systems and precise force sensing.

The experiments were performed at JILA, a joint institute of NIST and the University of Colorado Boulder, and co-authors include physicists from NIST’s Boulder campus. The research was supported by the Defense Advanced Research Projects Agency, the National Science Foundation and NIST. [Source: Eurekalert]

Image: This is a colorized image of the NIST micro-drum and circuit on a sapphire backing. JILA researchers demonstrated that the drum might be used as a memory device in future quantum computers. Teufel/NIST 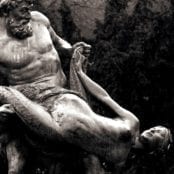