A nostalgic net cast wide to capture the beats, breaks and bombs of the rave era.

[dropcap style=”font-size:100px; color:#992211;”]S[/dropcap]
ipping on a glass of wine in the evening might seem like an unproductive way of supressing the sadness and despair at which one may look at the world right now.

Particularly when it comes to the actions of mother Russia, the homeland of my featured artist Colorhythm, but it may be the only legal and otherwise socially acceptable way of dealing with what’s happening in the world right now. Colorhythm, by all accounts, may be producing delicious tunes that hold significance among the world’s electronic music scene, but is this explorative house-breaks-dubstep-and-some mixture anything but burying one’s head in the sand to what is going on right now?

Colorhythm’s own press release from Slime Records goes on about the nostalgia surrounding the sound of Spectrum, a nostalgia based on the golden era of the rave scene.

At this, I re-aim my opening gambit. Nostalgia for yesteryear from those in power at the moment seems to be, ultimately, the reminiscence of curtains, whether those curtains are iron or doily Thatcher-printed. I point to David Cameron and Vladimir Putin for this one, both of populist tendencies and charismatic leadership, leading to greater divisions within the countries and between the countries. Out of the growth of the far right in Russia grows a radical left that is ultimately being crushed by the state, whilst the growth of the far right in the UK has been supressed by the state thus opening the door to the radical left, which is now frontline politics in the form of Jeremy Corbyn and pals.

I talk about these things because Colorhythm, a Russian on a British label, should be commentators of the times. Nostalgic dance music with a modern flair should be able to encapsulate the mood surrounding the modern expansion of mother Russia: the amalgamation of nostalgia and new-frontier economics; dividing up the Caspian Sea for oil; annexing Crimea; bombing Syria; colonial-style economic expansion into Africa, and playing navy with the Chinese, seems all too impassive for a nation that has so much home economics trouble.

This is all whilst Cameron and the Conservatives domestically strangle unions, cut the services wide, and continue to sell off the only housing stock worth something to someone who has little. Colorhythm should be asking a few questions with its music, challenging the status-quo. But with this nostalgic attitude taken by Colorhythm, and the Russians and British governments, I ask whether Colorhythm should be reminiscing of days gone by where rave was all the rave, or should Colorhythm be moving on to newer pastures and be commentating on what is going on around him? 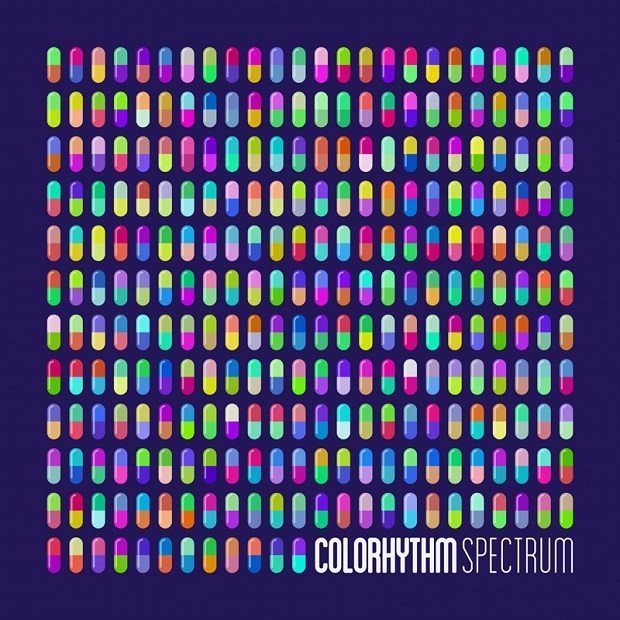 As I listen to Spectrum, I take in the vast depth of sounds that the album has to offer; it does, as the blurb from the label suggests, give one a well-rounded approach to electronic music whilst not transfixing on a single genre. The only downfall of this maybe is that it loses foot ground on an album that gravitates to a certain genre, it lacks centrifugal force across the album and continuity is question marked. The guise of genre-hopping is undoubtedly a populist record seller.

Not to say there are not some heavy handed bass lines or nimbly touched-up trebles on tracks across the album, it just generally lacks the meaty middle I seek in top-notch electronica. To all intents and purposes, Colorhythm presents Spectrum in the light of modern society’s ever-growing prescription pill popping culture (see artwork), and with this, it seems Colorhythm have drifted through the album in a dazed and subdued fashion.

No track really takes off but this is not a bad thing, if there was a standout track that took attention away from the rest the album it wouldn’t work, so as the album is, it works.

The darkest depths of my knowledge stream out of my back mind as I listen to “Morn”. The relatively ancient chasm that holds back the gulf stream of my memory seems to give way and I’m a child again, dancing seems to come easy to a man that has put little into the architecture of the moves and more into letting the flow meander across his body. It is a good starting track.

“Polychrome” ridicules the morn as it opens up, a cheap renegade is what it would call itself, breaking up new ground as it devastates the opposition, deep bass and twining trebles engulfing the power moves of the morn. Tit for tat in vibrancy and upholding rave values makes sense when describing this track; as a follow up “Polychrome” does nicely.

Now we enter the third stage, track three: “Turn Around”. It makes no qualms about things, it wants to be heard, but in this hysteria of the third turning circle it fails in producing the right mixture of texture and beats that is preferable to ventilating the fire that is this album. Instead of pouring on the gasoline it asks the listener to review the situation first and then dive in – it doesn’t hit you in the face.

The fourth track for an album is a difficult one, it should say “why?” or even a “why not?” but instead, this track, “The Mechanism Of Love”, asks why aren’t you dancing anymore? Owch? Yes indeed.

Its not all doom and gloom though. “Earworm” asks the question of “why not?” (in a particularly Kevin Saunderson sort of way). Dance accordingly.

The turn of this record is to come, but unfortunately it takes a few mundane diversions. The title track and “Inspire (ft.Moon Illusion)”, are equally decrepit to progressive electronica music. Oh well, not every debut album has speaker-blowing bangers from track to track, and if they did I would be asking questions.

Bring on “Hold Me (ft. Lily McKenzie)” – ‘Dancing in the dark’ seems like a normative line in a dance track but it does present itself nicely as a point of interlude for those who need to gather their thoughts. Thoughts gathered, one can progress to the next level of this album, it’s about time to turn it up a little because there is a decent bass line on this track, and unfortunately it has to go down again because the rattles at the top of the soundfield really aren’t worth it.

The top pitch continues into “Endless Horizon (ft. BSN Posse)” and this does allow for emphasis on the bass line but I just am not into this one. However, there are some major positives to be taken: there are some very good samples to be leafed from this track.

“U Got Me” – sounds like a title to an email sent from an inarticulate ten year-old to their teacher, on why they were not at school the day before: I cannot stand textspeak. Fortunately, the track does not fall into the category of said ten year-old walking down the street on said day off with it blaring out of their phone, no, it falls into their parent’s obsession with the dancefloor and equally excuse-ridden shoddy parenting due to having a raging hangover from a weekend bender – you got me? In short, it sounds alright.

“Coral Reef” is much of the same and does little to build up or entice the listener. You get the feeling from this track that it has been hidden towards the end of the album.

Unfortunately, “Vesper” trickles along and sums up the album’s latter stages where there is little punch left.

To sum up, I would buy this album if I were going to sit down and reminisce about days gone by but I wouldn’t buy it if I was getting out my Mystic Meg ball to look towards the future of dance music. Rave nostalgia is not progressive, but neither are the politicians who are in power right now, so it fits with the times.

Previous Story:
But Will There Be Fjords? The New Earths Yet to be Built

Next Story:
Is This Your Next-Gen Submersible Drone? The Harvard RoboBee