Is This Your Next-Gen Submersible Drone? The Harvard RoboBee

[dropcap style=”font-size:100px; color:#992211;”]D[/dropcap]
eveloping robots which can both fly in air and swim underwater.

In the 1980s, we’d have been all excited, thinking about the boundless applications for futuristic transport and recreation.

Now, older and wiser, we know it will only ever find its way into the next generation of selfie-cams.

In 1939, a Russian engineer proposed a “flying submarine” — a vehicle that can seamlessly transition from air to water and back again. While it may sound like something out of a James Bond film, engineers have been trying to design functional aerial-aquatic vehicles for decades with little success. Now, engineers may be one step closer to the elusive flying submarine.

To solve this engineers at the Harvard John A. Paulson School of Engineering and Applied Science (SEAS) took a clue from puffins. The birds with flamboyant beaks are one of nature’s most adept hybrid vehicles, employing similar flapping motions to propel themselves through air as through water.

“Through various theoretical, computational and experimental studies, we found that the mechanics of flapping propulsion are actually very similar in air and in water,” said Kevin Chen, a graduate student in the Harvard Microrobotics Lab at SEAS. “In both cases, the wing is moving back and forth. The only difference is the speed at which the wing flaps.”

Coming from the Harvard Microrobotics Lab, this discovery can only mean one thing: swimming RoboBees.

For the first time, researchers at SEAS have demonstrated a flying, swimming, insect-like robot — paving the way for future duel aerial aquatic robotic vehicles. The research was presented recently in a paper at the International Conference on Intelligent Robots and Systems in Germany, where first author Chen accepted the award for best student paper.

The paper was co-authored by graduate student Farrell Helbling, postdoctoral fellows Nick Gravish and Kevin Ma, and Robert J. Wood, the Charles River Professor of Engineering and Applied Sciences at SEAS and Core Faculty Member at the Wyss Institute for Biologically Inspired Engineering.

The Harvard RoboBee, designed in Wood’s lab, is a microrobot, smaller than a paperclip, that flies and hovers like an insect, flapping its tiny, nearly invisible wings 120 times per second. In order to make the transition from air to water, the team first had to solve the problem of surface tension. The RoboBee is so small and lightweight that it cannot break the surface tension of the water. To overcome this hurdle, the RoboBee hovers over the water at an angle, momentarily switches off its wings, and crashes unceremoniously into the water in order to sink. 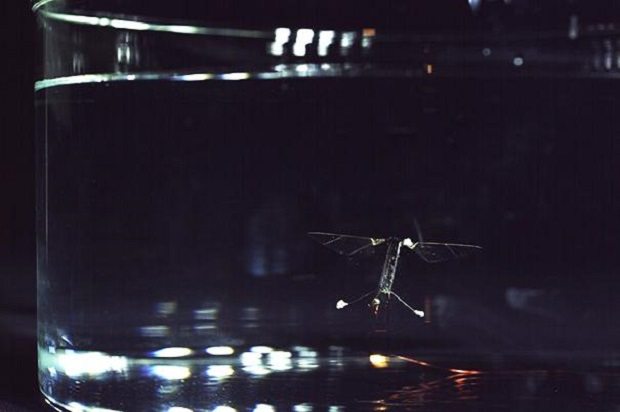 Next the team had to account for water’s increased density.

“Water is almost 1,000 times denser than air and would snap the wing off the RoboBee if we didn’t adjust its flapping speed,” said Helbling, the paper’s second author.

The team lowered the wing speed from 120 flaps per second to nine but kept the flapping mechanisms and hinge design the same. A swimming RoboBee changes its direction by adjusting the stroke angle of the wings, the same way it does in air. Like a flying version, it is still tethered to a power source. The team prevented the RoboBee from shorting by using deionized water and coating the electrical connections with glue.

While this RoboBee can move seamlessly from air to water, it cannot yet transition from water to air because it can’t generate enough lift without snapping one of its wings. Solving that design challenge is the next phase of the research, according to Chen.

“What is really exciting about this research is that our analysis of flapping-wing locomotion is not limited to insect-scaled vehicles,” said Chen. “From millimeter-scaled insects to meter-scaled fishes and birds, flapping locomotion spans a range of sizes. This strategy has the potential to be adapted to larger aerial-aquatic robotic designs.”

“Bioinspired robots, such as the RoboBee, are invaluable tools for a host of interesting experiments — in this case on the fluid mechanics of flapping foils in different fluids,” said Wood. “This is all enabled by the ability to construct complex devices that faithfully recreate some of the features of organisms of interest.”

Next Story:
Peter Sellers – Behind the Camera. The Photography of a 60s Icon