Rashid Rana’s: Everything Is Happening At Once 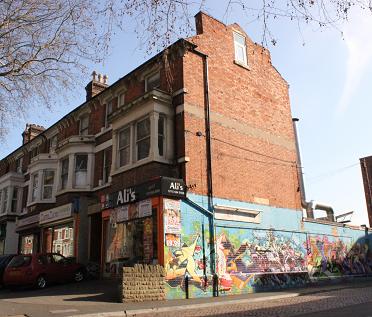 ‘Smash Patriarchy’ says the poster outside, with its adhesive wearing off. Pink is the colour attached to a Nottingham green telephone signals box, a young gentleman walks by scoffing a deep fried chicken. I’m in the café of Hyson Green’s New Arts Exchange: a building with a starkly dark cubic exterior and open plan white, black and grey interior, drinking overpriced ginger beer and looking out onto the road.

Like all arty cafés, Smartphones, laptops, and three pound paninis are go; quite posh, very clean, and professional in design and layout. Knitted sleeves hug iron posts that prop up the flat exterior walls and room-width sliding glass windows that display amalgamated NAE symbols in purple, pink and green in two strips horizontally wall to wall, dividing these huge amounts of glass. The floor is grey slate-lookalike stone that blends into the black window frames, and silhouettes the stylish black and white tables and chairs of the café.

I pop out for a cigarette, you can see one of the relatively new tramlines that lead to the heart of the city. Beyond that, the vast open grounds of Forest Fields and across that you come to Nottingham’s red light district that backs onto Nottingham Girls High School, one of the most prestigious and successful in the country.

Looking the other way you see the centre of Hyson Green: a run-down collection of specialist retail outlets and fast-food chains, an ageing library, and a shiny new health centre. Hyson Green is one of the more ‘socially deprived’ areas of Nottingham, although the communities that encapsulate first to fifth generation Afro-Caribbean, South Asian, African, and Eastern European families are closer, and more tightly knit than that of any woolly poster sleeve.

There are a lot of pushchairs and tracksuits flying about, students and day folk wandering; arty lookalikes and dreadlocks, police and community protection officers, and broody rude boys of all sorts stepping the streets and cruising to basslines that shake the glass of the café. Street politics seem to drift by in Hyson Green. Like all communities, you’re going to have differences of opinion when drugs and prostitutes get involved, but Nottingham’s gangs tend to go by area code. Larger that average dogs that would make a police Alsatian shit are a common occurrence.

The NAE is supposed to bring art to, and express culture in this area. The current exhibition of Rashid Rana is an artist that is meant to fit that bill. The NAE, it seems at first glance, is a world away from this. First impression gives it as a multicultural hipster hangout: tweed, herringbone, and dark cashmere jackets are the norm, not Adidas, saris, and pushchairs.

A Mirage of Faces

Looking into Rana’s work I see faces and bodies continuously, faces of men, women, and children, distorted faces; a collective mirage of absurdity that no one I speak to seems to see until I point it out. Is it just me or am I once again seeing the bigger picture that Rana wants us not to see? 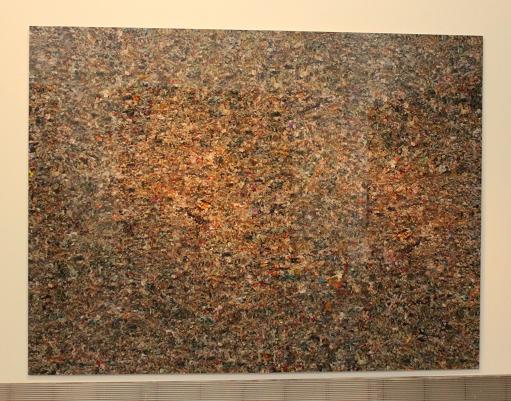 Rubbish and waste transform into a female’s face in The World Is Not Enough, maybe a symbol of repeated attempts to collect and piece together a rubbish relationship which in part and whole turns into a mirage of beauty. The repetition of rubbish and dabs of flick colour photography, reminiscent of Jackson Pollock, is positively painful for the heart and mind in subject matter both macro and micro.

a white and grey outline,

Faces continue in theme into Language Series II, where a female’s face, a white and grey outline, seems to be being punched by knuckles of white, yellow, black, and grey, The distorted nose runs red down to the bottom of the pixel collage, all set upon the backdrop of blue skyline and trees drawn out in definitive jagged lines.

The, for me, incomprehensible blurred imagery to the right of the fist seems to represent movement, and space of a mind that has lost control into the darkness of domestic abuse.

It is completely understandable why Rasid Rana, when positioning the lighting for the exhibition, was very specific in his needs. He is telling you where to stand; behind the angled lights and stare. You will see what I mean if you make the chance to see this exhibition.

On to his more famous pieces, Hyson Green’s NAE has two of a series that are provocative in nature, so obvious and simple in subject matter, and are so testing ethically and culturally they get slapped with a R18 sticker and are therefore explosively brilliant. I’m talking about Veil VI and Red Carpet, and I’m walking on the periphery eggshells of social comment, but if Rana can drop the eggs of social comment in his work, surely I’m allowed to trample on the shells?

Veil VI, number 6 in the series of Hijab clad women made out of a mosaic of purely White Caucasian women exploring the extremities of flexibility and bodily functions in pornography of all types. 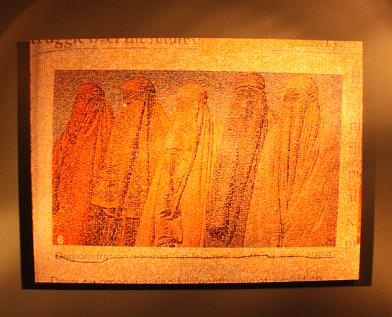 To be honest with you, I could rant all day about the simplistic idiocy of such a brilliant piece of photo-mosaic trash-culture journalism: Rana is bringing little to the table except shock and awe, an American Iraqi invasion into the brain than a diplomatic debate. He pulls the extremities of minority population thought together very cleverly.

The Daily Sport next to

and thinks that it’s a

But if he is trying to represent divisions between East and West in the media he’s sliced the mark, because if he read across the media he wouldn’t find the two extreme polarisations of East and West, or Hijab and White Caucasian tits: Rana’s basically placed The Daily Sport next to The Daily Express and thinks that it’s a decent starting point for debate, so I’m not even going to waste my time. I will let another critic sweep up those piss-easy egg shells of social comment. But granted, it does make you think.

On Red Carpet you see a different angle of social and cultural comment by Rana, intriguing to the senses and equally provocative in nature as Veil VI, but subject matter seems to slip into a less obvious kind. Concepts on sheep/goats, wool, and carpets are painstakingly slaughtered in front of you as Rana brings the realities of consumption to the eye. Entwined within Red Carpet are a million questions of an ethical, cultural, and provocative nature that encapsulates issues of how we treat animals, how we utilise animals as a resource, and how we view these issues.

Red Carpet in this instance raises valid debate: shock and awe tactics of this nature surrounding these issues are more accessible to the mind when presented in such a way. I think this is because the trashiness is not there, and we don’t view animals as ‘us’, but as ‘them’.

I also think that there are more interesting debates to be had around consumption and the use of animals in respect to the environment and animal welfare. It’s more of a adult debate than an adulterate debate.

The pieces that actually make you think about Rana and his background are found outside of the darkly-lit backroom of a fantastic exhibition. The grandeur and significance of holding such a exhibition at the NAE in Hyson Green is a spectacle to the eye, and poses truly intriguing questions about how Rana’s work reflects its surroundings, and how some of his work would be received, say, if it were broadcasted openly on placards around Hyson Green.

It would be to take the artwork out of context of an exhibition and ask real questions of a highly diverse collection of different cultural and ethnic communities. So with this, Rashid Rana’s Everything Is Happening At Once is a landmark exhibition. It does reflect the diversity of opinion within local communities, and needs a heavily critical eye staring at it round the clock as school children, day workers and wonderers; art critics and types, all interact with Rashid Rana’s rawness in abstract cubed simplicity.
http://www.thenewartexchange.org.uk