Odd or Even? Your Brain Sucks

If the brain is like a computer, why do brains make mistakes that computers don’t? 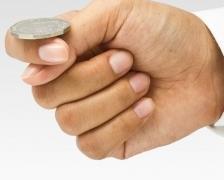 [dropcap style=”font-size:100px; color:#992211;”]D[/dropcap]oes it make a difference if the coin is made of chocolate? *Goes back to Christmas guzzling*

Even scientists are fond of thinking of the human brain as a computer, following sets of rules to communicate, make decisions and find a meal.

But if the brain is like a computer, why do brains make mistakes that computers don’t?

Research by Gary Lupyan, a cognitive scientist and psychology professor at the University of Wisconsin–Madison, shows that our brains stumble on even the simplest rule-based calculations. Instead, humans get caught up in contextual information, even when the rules are as clear-cut as separating even numbers from odd.

Almost all adults understand that it’s the last digit — and only the last digit —that determines whether a number is even, including participants in Lupyan’s study. But that didn’t keep them from mistaking a number like 798 for odd.

A significant minority of people, regardless of their formal education, believe 400 is a better even number than 798, according to Lupyan, and also systematically mistake numbers like 798 for odd. After all, it is mostly odd, right?

“Most of us would attribute an error like that to carelessness, or not paying attention,” says Lupyan, whose work was published recently in the journal Cognition. “But some errors may appear more often because our brains are not as well equipped to solve purely rule-based problems.”

For example, when asked to consider a contest open only to grandmothers and in which every eligible contestant had an equal chance of victory, people tended to think that a 68-year old woman with 6 grandchildren was more likely to win than a 39-year old woman with a newborn grandkid.

“Even though people can articulate the rules, they can’t help but be influenced by perceptual details,” Lupyan says. “Thinking of triangles tends to involve thinking of typical, equilateral sorts of triangles. It is difficult to focus on just the rules that make a shape a triangle, regardless of what it looks like exactly.”

In many cases, eschewing rules is no big deal. In fact, it can be an advantage in assessing the unfamiliar.

If something looks and walks like a duck, chances are it’s a duck

“This serves us quite well,” Lupyan says. “If something looks and walks like a duck, chances are it’s a duck.”

Unless it’s a math test, where rules are absolutely necessary for success. Thankfully, humans have learned to transcend their reliance on similarity.

“After all, although some people may mistakenly think that 798 is an odd number, not only can people follow such rules — though not always perfectly — we are capable of building computers that can execute such rules perfectly,” Lupyan says. “That itself required very precise, mathematical cognition. A big question is where this ability comes from and why some people are better at formal rules than other people.”

That question may be important to educators, who spend a great deal of time teaching rules-based systems of math and science.

“Students approach learning with biases shaped both by evolution and day-to-day experience,” Lupyan says. “Rather than treating errors as reflecting lack of knowledge or as inattention, trying to understand their source may lead to new ways of teaching rule-based systems while making use of the flexibility and creative problem solving at which humans excel.”

Next Story:
Wilko and Out