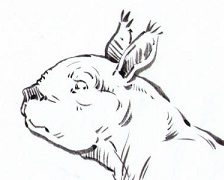 You want to be called Ambley? Or Lurchy? And you’ve eaten the pony?

Now extinct giant kangaroos most likely could not hop and used a more rigid body posture to move their hindlimbs one at a time, according to a study published in PLOS ONE by Christine Janis from Brown University and colleagues.

The “short-faced,” large-bodied sthenurine kangaroos–a now extinct relative to modern-day kangaroos–first appeared in the middle Miocene and became extinct in the late Pleistocene. The largest of these kangaroos had an estimated body mass of 240 kg, almost three times the size of the largest currently living kangaroos. Scientists speculate that kangaroo of this size may not have been physically able to hop. Analysis of different sthenurine species limb bones when compared to other kangaroos shows a number of anatomical differences, especially in the larger species.

The physical differences the authors of this study found suggest that the large kangaroo species lacked many specialized features for rapid hopping, but had anatomy suggesting they supported their body with an upright posture and were able to support their weight on one leg at a time using their larger hips, knees, and stabilized ankle joints. Previous studies described that sthenurines’ specialized forelimbs and rigid lumbar spine would limit their ability to move slowly, using the tail as a fifth limb, as is typical of smaller kangaroos.

Instead, the authors posit that sthenurines adopted a walking gait on two hind legs, in the smaller and earlier forms, this gait may have been used as an alternative gait to using the tails as fifth limb at slower speeds. Larger Pleistocene kangaroos may have used this gait exclusively as they evolved larger body sizes, where hopping rapidly was no longer a possible option.

“People often interpret the behavior of extinct animals as resembling that of the ones known today, but how would we interpret a giraffe or an elephant known only from the fossil record? We need to consider that extinct animals may have been doing something different from any of the living forms, and the bony anatomy provides great clues,” said Christine Janis.