Malaria! An Academic in Africa

I never did do the conference in the end.  I’ve spent most of the last week, including all of the weekend, feeling rough as hell.  Like having bad flu but without much in the way of a cough or congestion.  Sleeping fifteen hours a day and unable to deal with anything more demanding than making a cup of tea.  At a push.

The first thing that this makes you think of is malaria.  Now, I’ve confirmed that I don’t have malaria, which is nice, but in a way it would have been quite nice to have something tropical, just to fend off the potential charges of man flu.  I would vigourously deny those. But then, of course I would.

This spell of sickness meant I had to go to the Lebanese doctor again, who was the model of efficiency, even if his English isn’t all that good.  Somehow I found this comforting rather than worrying, though, exactly like last time.  And being told “it’s just a virus, there’s nothing I can do” is pretty much universal in doctor-speak anyway.

It also meant that I didn’t turn up to give my paper.  I tried to go and apologise and hand in the 10 copies they’d asked for, but unfortunately I went to the wrong place, so texted Elizabeth (who was also giving a paper) and asked her to apologise on my behalf.  She did, and said to me later that the convenor was being pretty funny about it – but by the time Elizabeth told me this I’d already been given a “Certificate of Participation”and a warm speech of thanks from a lady who’d travelled all the way out to campus to give it to me and tell me how grateful they were that I took part.  I didn’t say that in fact I hadn’t turned up, and was quite glad that my usual laxness meant that I hadn’t yet sent the email of apology I truly intended to be one of Monday morning’s first tasks.

the conference was a waste of time anyway

I don’t really regret missing it, because it sounds like the conference was a waste of time anyway.  The papers weren’t actually read out, each person just talked about theirs for 10 minutes or so, and that I think, was about it.

But I can take the credit, and that, my friends, is all that matters. 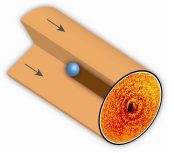 Next Story:
The Shadow of an Atom: Photographed