The Shadow of an Atom: Photographed 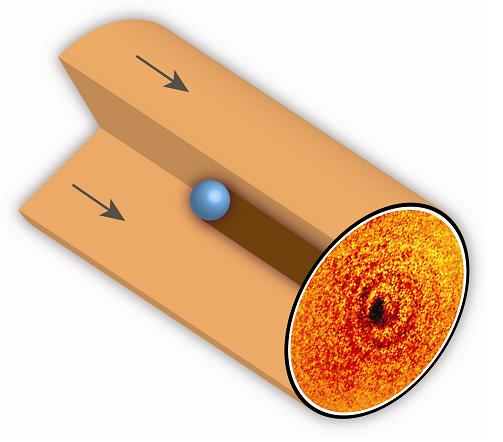 Makes the zoom feature on your iPhone seem a little feeble by comparison.

In an international scientific breakthrough, a Griffith University research team has been able to photograph the shadow of a single atom for the first time.

"We have reached the extreme limit of microscopy; you can not see anything smaller than an atom using visible light," Professor Dave Kielpinski of Griffith University's Centre for Quantum Dynamics in Brisbane, Australia. "We wanted to investigate how few atoms are required to cast a shadow and we proved it takes just one".

At the heart of this Griffith University achievement is a super high-resolution microscope, which makes the shadow dark enough to see. No other facility in the world has the capability for such extreme optical imaging.

Holding an atom still long enough to take its photo, while remarkable in itself, is not new technology; the atom is isolated within a chamber and held in free space by electrical forces.

"By using an ultra hi-res microscope we were able to concentrate the image down to a smaller area than has been achieved before, creating a darker image which is easier to see", Professor Kielpinski said.

The precision involved in this process is almost beyond imagining.

"If we change the frequency of the light we shine on the atom by just one part in a billion, the image can no longer be seen," Professor Kielpinski said. "Because we are able to predict how dark a single atom should be, as in how much light it should absorb in forming a shadow, we can measure if the microscope is achieving the maximum contrast allowed by physics. This is important if you want to look at very small and fragile biological samples such as DNA strands where exposure to too much UV light or x-rays will harm the material".

"We can now predict how much light is needed to observe processes within cells,under optimum microscopy conditions, without crossing the threshold and destroying them."