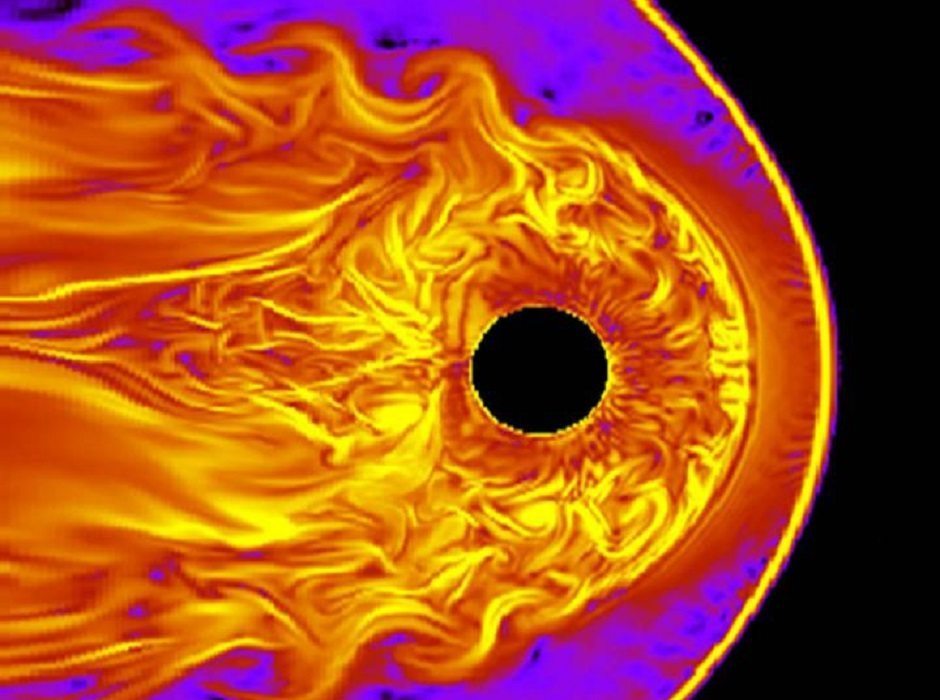 Only to be pummelled by the reality of sand-filled whitewater mush, half-ton foamboards and a beachful of overweight beginners clustered in dayglo rashvests.

The universe overflows with repeating patterns. From the smallest cells to the largest galaxies, scientists are often rewarded by observing similar patterns in vastly different places. One such pattern is the iconic surfer’s waves seen on the ocean – a series of curled hills moving steadily in one direction.

The shape has a simple cause. A fast fluid, say wind, moving past a slower one, say water, naturally creates this classic shape. Named Kelvin-Helmholtz waves in the late 1800s after their discoverers, these waves have since been discovered all over the universe: in clouds, in the atmospheres of other planets, and on the sun. Now two recently published papers highlight these shapely waves at the boundaries of near-Earth space.

Scientists want to understand the details of what happens at those boundaries because various events there can disturb our space environment. When strong enough, this space weather can interrupt our communications systems or electronics on board satellites. While scientists have occasionally spotted Kelvin-Helmholtz waves at this boundary before – giving scientists reason to wonder if they could enhance or enable such space weather — the new papers show the waves are much more common than expected. The second paper presents a case study describing a previously unobserved way in which the waves can be initiated. Together, the two sets of research suggest the waves may have more of an effect on our space environment than previously realized.

“We have known before that Kelvin-Helmholtz waves exist at the boundaries of Earth’s magnetic environment – but they were considered relatively rare and thought to only appear under specialized conditions,” said Shiva Kavosi, a space scientist at the University of New Hampshire in Durham, and first author on one of the papers, which appeared in Nature Communications on May 11, 2015. “It turns out they can appear under any conditions and are much more prevalent than we thought. They’re present 20% of the time.”

The waves are a direct result of the way our planet fits into the larger solar system. Planet Earth is a gigantic magnet and its magnetic influence extends outward in a large bubble called a magnetosphere. A constant flow of particles from the sun, called the solar wind, blows by the magnetosphere – not unlike a wind blowing over the surface of the ocean. During certain situations, particles and energy from the sun can breach the magnetosphere, crossing into near-Earth space. It is this influx that lies at the heart of the space weather events that can affect our technology closer to home.

To spot the frequency of the Kelvin-Helmholtz waves, the team relied on instrument data from two NASA spacecraft: the Advanced Composition Explorer, or ACE, and the Time History of Events and Macroscale Interactions during Substorms, or THEMIS. ACE sits between Earth and the sun, measuring the solar wind about 30-60 minutes before it makes contact with Earth’s magnetosphere.

THEMIS orbits Earth, regularly moving in and out of the magnetosphere boundaries. The researchers first established what the Kelvin-Helmholtz waves looked like with numerical simulations. They then used THEMIS observations to see when and where they occur. Next, they correlated what they saw at the magnetopause boundaries with what ACE measured in the solar wind.

Previous theories suggested that the Kelvin-Helmholtz waves would only occur under very specific situations, such as when the solar wind’s magnetic fields pointed in the same direction as Earth’s. Unexpectedly, the team found that the Kelvin-Helmholtz waves appeared under a wide variety of conditions. Fast and slow winds and winds with magnetic fields pointed in any direction were all equally capable of producing these classic waves.

While the first paper compared Kelvin-Helmholtz waves to what was seen in the solar wind, the second team compared it to what was happening closer to Earth and provides a possible explanation as to why they may be observed so frequently. The second paper was released online in the Journal of Geophysical Research on June 26, 2015, and was conducted by Brian Walsh at Boston University and Evan Thomas, a student at Virginia Tech in Blacksburg, Virginia, who is collocated at NASA’s Goddard Space Flight Center in Greenbelt, Maryland.

Thomas works with data from a network of ground observatories known as SuperDARN, short for Super Dual Auroral Radar Network. These measure electric fields in near-Earth space. Walsh focuses on THEMIS data. Using the combined space- and ground-based observations, the team detected Kelvin-Helmholtz waves propagating down the side of the magnetosphere’s boundary. THEMIS also spotted something else: Just before the waves began, a reservoir of charged gas around Earth – known as the plasmasphere – sent out a thin plume of plasma that traveled over 20,000 miles to contact the edges of the magnetosphere, depositing additional atoms into that crucial sun-Earth boundary.

Such plumes are fairly regular occurrences, but this is the first time they’ve been correlated with Kelvin-Helmholtz waves. This case study suggests that the plume itself may trigger the waves, perhaps because it increases the density at the magnetosphere boundary, thus creating a fluid that is substantially more sluggish than the faster solar wind blowing past – the necessary conditions for a Kelvin-Helmholtz wave.

This simulation shows the magnetic bubble around Earth, called the magnetosphere. As the the solar wind — a steady flow of particles from the sun — rushes by, it creates the shape of classic surfer waves known to scientists as Kelvin-Helmholtz waves.

“The theory of Kelvin-Helmholtz waves is well-developed, but we don’t have many observations,” said Thomas. “These new observations show that the waves are happening more often than expected and are probably more important than we thought – but we still don’t know all the details.”

Understanding that crucial magnetospheric boundary and how it can let in solar material requires an understanding of the variety of processes that can affect and disrupt it.

“There are a lot of processes proposed for how material enters into the magnetosphere,” said Raeder. “And Kelvin-Helmholtz waves are one of them. Previously we thought the waves weren’t happening often enough to have a strong effect, but if Kelvin-Helmholtz waves perturb the boundary and mix the solar material with near-Earth space, then that would be a way for the plasma from the solar wind to get into the magnetosphere.”

Whether or not Kelvin-Helmholtz waves are a strong trigger for space weather events near Earth, these crucial details help paint a more complete picture of our magnetosphere, ultimately helping us to protect our home planet.