Backed by mesmerising animations of an elephant bouncing on a trampoline, no one can deny that Primus put on a great show 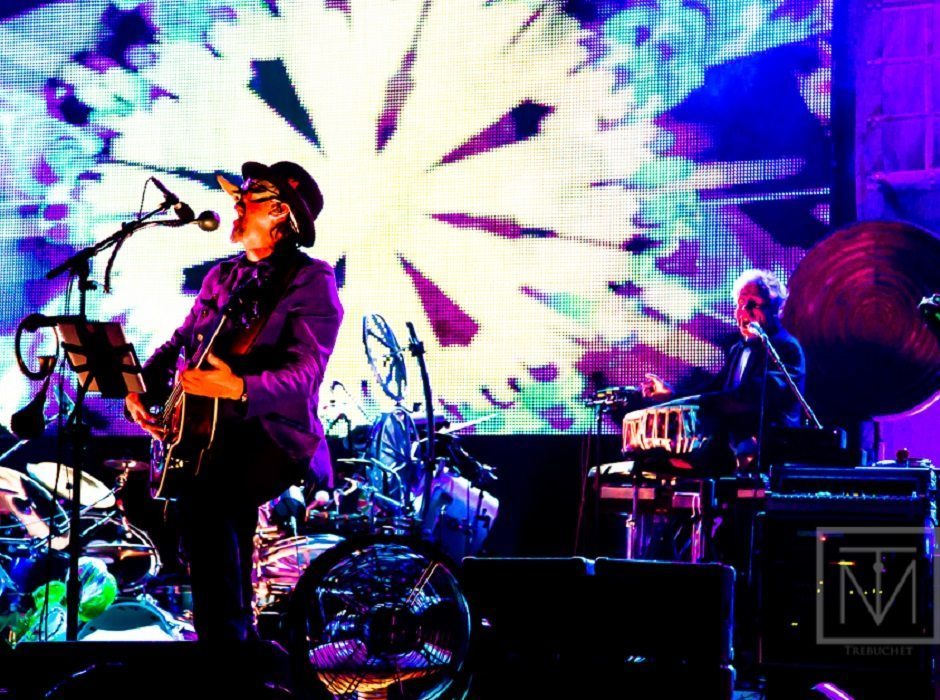 As if in hemp laden reverie the faces in those shirts aren’t twenty years older, miraculously they are still twenty. Time has set me down firmly into my youth and some sort of circus druid proceeds to complain about something, before being jostled into the beery throng by a conga line of bros ready to ‘fucking mosh maaaaan’.

What the jam-funk flame of Primus has awoken: a gyrating swarm of moths and barflies, has very great expectations for their band; less The Primus and more their Primus. There are expressions of concern regarding how much ‘new material’ will be played ranging from resigned curiosity to outright dread. Musing on whether Claypool’s Wonka was perhaps a little sour for some tastes fade as the band hit the stage, the atmosphere overloads as the crowd roars and it could be a celebration, but visibly Primus is in the throes of alienation.

Les looks lonely onstage, low lighting catching strange angles against his pointy nose, thin features and professorial goatee. The set begins too slow and without vigour, the crowd’s adrenaline starts to melt away. Time always gets his man. Is this it, or is it just a ploy to build the audience from such desultorous lows towards higher crescendos?

Not so long ago it would have been rare for Primus to play the UK. In 2011 a series of shows marked the first appearance of the band in 14 years, since then there have been a number of tours culminating in a two night stand at the Royal Albert Hall (April 4-5 2014) where the band played all their successes (‘hits’ is perhaps too piquant) and albums Sailing the Seas of Cheese (Yay!) and Green Naugahyde (Hmm).

With their resplendent fan favourites, ambitious misses and iconic Les Claypool, there isn’t another Primus and there never will be. They are a band so famously unique that iTunes made them a genre unto themselves.

Primus captured a rock audience with acerbic insight and funky fun at a time when the high tide of flannel and stadium rock was filled to evenflowing. They brought an extreme level of musicianship back to popular music when, slacker technique was just ‘like-whatever-fine-I-guess’. They might not have reforged the face of music in their image, but more importantly, they, along with bands like the Flaming Lips, showed that music could still be the realm of small budget, smart eccentricity rather than a model fronted model for the Man to dupe pocket money from the maladjusted (often the bands in question). Weird was good again. 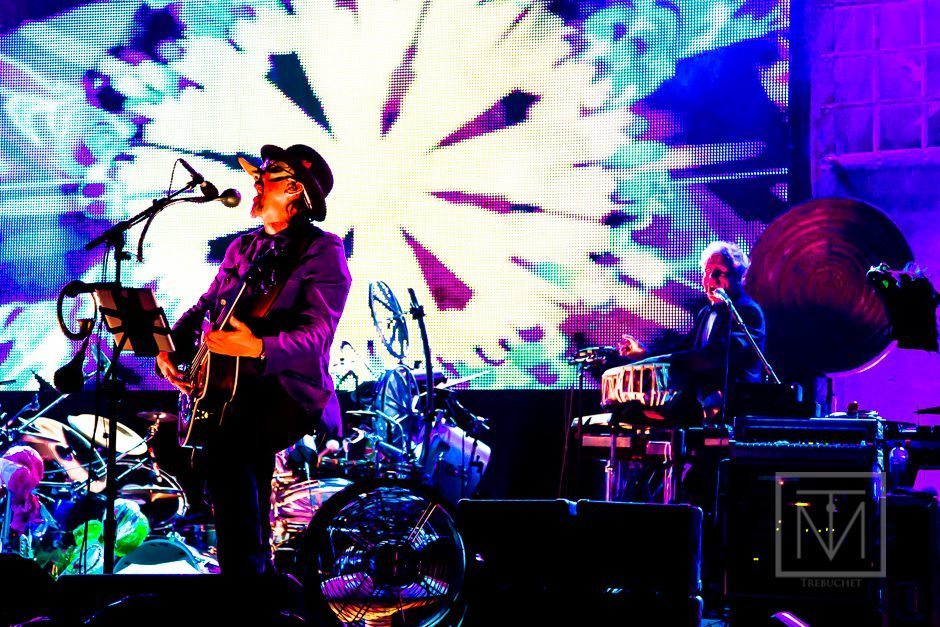 “Oh, welcome to this world of fools
Of pink champagne and swimming pools
Well, all you have to lose is your virginity
Perhaps we’ll have some fun tonight so stick around and take a bite of life
We don’t need feebleness in this proximity”
Primus, ‘Welcome to this World’

Of course all this would be for naught if the music wasn’t amazing and in the 90s Primus made music as good as it gets.

Frizzle Fry, Sailing the Seas of Cheese, Pork Soda, the EP Miscellaneous Debris and the live Suck On This are all within the canon of the truly great. Pork Soda in particular, while lacking the Billboardish singles of the other releases, as a unique whole is a masterpiece, a biting vision of millennial America. An album where fear, hatred, poverty and anomie are ground deep into whatever was left unfucked by the Seventies me culture and the Eighties poverty of flamboyant riches.

Tales, while fun, commercially successful, and containing some excellent material (Wynona, Over the Electric Grapevine), marked the point where Primus began to rot. They called the next album The Brown Album (1997) and where it failed to stick, it stank. The following releases eked out water for the faithful but as Claypool put it:

“We were reaching the end of our creative rope. The well was just dry, so we just started sucking mud”

As it was by around 1999/2000 when the band shelved Primus to find themselves, the remaining diehard fans were neither surprised nor hurt. Of course, Primus would be back. Where else would they go?

Reunions, albums and tours happened but Primus have never quite recaptured their earlier magic, nor in many cases the heights of some Claypool’s other endeavours (often released on his own Prawnsong record label). As reviewed in Trebuchet, the Chocolate Factory album harked back to Pork Soda’s sense of album-wide concept and, if not particularly necessary, was a little artistic project that suggested that the years might have topped up the band’s creative well. We might get another taste, the fire might be back.

So it is that as 2015 Summer lengthens the band is back to play a two set show at the Brixton Academy. One set of sugary crowd-pleasing Primus faithfuls, the other set the rougher medicine of Primus & The Chocolate Factory, but which dose will be served first?

As the curtain parted on bare stage Primus filed through the darkness to their places and limped through a sluggish set of the classics. Claypool looked scarcely present until Lee Van Cleef, when he started to perk.

Guitarist Lalonde does what he does but even he looked to be taking it a bit easy as the music started to dribble quietly through the inebriated auditorium. Primus fans love to get out there, and did so with aplomb. From douchey baseball cap wearing lads to dreadlocked hippies, everyone locked together and heaved along with the deep funk.

As the opening chords of John the Fisherman tore a distorted current through the crowd, a huge roar and a proper moshpit erupted, sending littl’uns and thirtysomething mums scurrying away. Reacting to the response the band lifted their form for the final pleasers, peaking with the epic groove of Over the Electric Grapevine. Pushed by Lalonde’s tasty fretwork and the heavy hitting percussion that Primus is famous for, Behold! It was good but too soon it was done.

Intermission came suddenly. Just when the band and the crowd had fused into one. Just when the music was finally picking up beyond a vaguely geriatric crawl. It was over.

Picking up bits of conversation from the crowd, expectations were low regarding the Chocolate Factory material. More than a few fans left altogether. Excuses were made, it was a Tuesday, the kids in the morning etc. Would it be even worse live? They’d limped through their best stuff, after all.

But we had nothing to fear as the stage lights hit a fantastic array of props. From mushrooms to candy canes to horses’ heads, Claypools imagination was emptied out onto the stage and as they played through the album there was an increased sense of presence, as though Primus wanted to remind you that they’ve always been a band looking forward, reminding us that the old stuff was just that.

As said in a previous review, I don’t believe the songs on Chocolate Factory are themselves that great, however in context to the video work, stage presentation and performance, they fit perfectly. The common criticism that Lalonde has been muted on several of the later releases is again realised here. He’s always been a tasteful foil to the exuberant Claypool, however in the new material he seems a bit lost . Perhaps he’s downplaying his guitar in order to leave room for the wider musical dimensions of cello and vibes/percussion, both of which expand the tight percussion of Primus, allowing the music it to breathe. Wonka live is a different delicacy. As the five musicians came together the flatness of the record becomes jaunty and weird, ecstatic and mournful. Claypool in the Wonka costume and character finds himself and is able to connect with the audience. Which he does. Farewell Wonkites roars against the ages, pushing the encore beyond expectation, peaking with the psychedelic jam: Southbound Pachyderm. Backed by mesmerising animations of an elephant bouncing on a trampoline, no one can deny that Primus put on a great show and whatever low points there were in the performance are forgotten as the evening closes with Bastards.

Previous Story:
Goat Meat, The Meat on the Street, We Love to Eat

One Reply to “Sweet dreams: Primus ’ Wonka ends on a winsome note.”