You might be forgiven for wanting to run a mile from any exhibition that examines the relationship we have with our planet.

Environmentalism has been sucked from society’s unfashionable sidelines into the screaming vortex of brand capitalism, erupting like a lurid geyser of guilt right in our faces. The very machinery that promotes insatiable consumption now condemns us “Look what you’ve done to Mother Earth! These are the products you must buy to save her.”

Mercifully, Lost in Fathoms, a collaborative exhibition by visual artist Anais Tondeur and hydrodynamic scientist Jean-Marc Chomaz, is nothing like that. It’s the product of a years’ work  in the Hydrodynamics Lab at Paris’ Ecole Polytechnique (where Tondeur is artist-in-residence and Chomaz professor) and a diverse clutch of scientific partners. The show feels like stepping into a noir detective story, surrounding the disappearance of the island of Nuuk – discovered and lost a number of times of the past couple of centuries, it finally vanished forever into the sea in 2012.

Tondeur’s shadowgrams begin on the upper floor, accompanied by the alienating crackle and knock of a towering horn loudspeaker, later revealed to be broadcasting the fracture of a basalt sample from the elusive island. The shadowgrams begin to tell the story of the island. 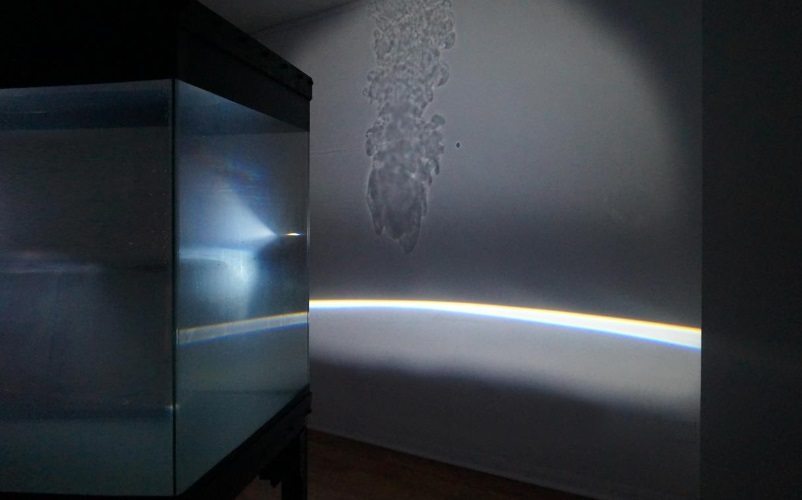 Misty and softly focussed, scale and space take a back seat to the texture and temperament of their subjects. Nuuk seems isolated in time and space as its geological features are forensically documented. The shadowgrams are inescapably bleak, but there’s affection there too, infused with a respectful distance characteristic of researcher and subject.

Before you sink too deeply into nostalgia for an island that could easily have never been discovered you can head downstairs to see the rest of the shadowgrams. With them there’s the basalt sample responsible for the soundtrack upstairs. A cable runs down from the ceiling to the rock on its plinth reminding you again who the star of the show is. Beyond, in a little climate-controlled chamber is a fractured wax plate, demonstrating the formation of a fault line of the type that may well have perpetrated Nuuk’s disappearance. Viewed with the shadowgrams these objects start to animate the drama that unfolded out in the Arctic sea in 2012.

In the next room you’ll find a rack of water samples, elegantly presented in blown-glass vials and original sample bottles. They document the movement of a wave as it follows the path of deep oceanic currents around the world. Labels reveal the far-flung pelagic origins of the humble water, with the accompanying depth measurements hinting at the immense effort required to collect them.

The experimental ephemera downstairs represent an absence and it’s into this void that we’re invited to pour ourselves, to consider the processes that have such bearing on our lives and to which our lives have absolutely zero bearing. Perhaps one of the reasons we’ve been so reluctant to change our ways when it comes to global warming is the inconceivable nature of the problem. Lost in Fathoms doesn’t proselytise, but by sketching the extinction of an island on a human scale it reminds us of the cataclysmic context in which we live out our little lives.

On the way out make sure you peer behind the curtain at the bottom of the stairs, this room reveals some of the tools and notes of Tondeur and her collaborators, the joy of investigation unites the diversity of their approaches and for a moment you might wonder why art and science were ever separated.

Lost in Fathoms continues until the 29th of November at GV Art, Chiltern Street, London.