The Brick Lane gallery showcases works of talented practitioners from London, these shows include photographs and painting.

[dropcap style=”font-size:100px;color:#992211;”]T[/dropcap]he Brick Lane Gallery is proud to present two new exhibitions ‘Landscape’ and ‘Contemporary Painting’! The Private Views will be hosted this Wednesday night at 6pm, please join us as we toast a glass to this eclectic mix of works. From landscape photography and oil painting to abstract and figurative art, our local and international artists have produced pieces unlike anything we have shown before.

We have works from Belinda Bushby, a highly talented landscape artist whom uses expressive marks and bold brushstrokes to depict British countryside in a classical style. Several of her works feel full of movement, her marks inspired by the wind, whilst others feel still, peaceful and considered. 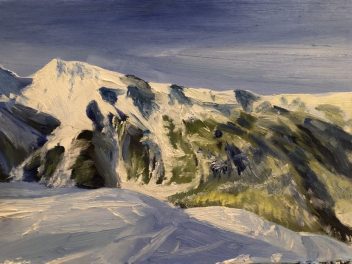 The Top of the Shoulder, Fresh Shoulder. Belinda Bushby.

Mary Swift depicts moonlit London; large red buses invade her scenes as if capturing a snapshot of the only quick paced movement of adeserted city. Her pieces are void of people yet the scenes are busy with light and movement as if on the precipice of commotion. In our Contemporary Painting exhibition we are displaying works by Nayanna Kanodia, an Indian artist, whose body of work is a vibrant depiction of Indian life. The 2D characters in her work are surrounded by exuberant and highly detailed surroundings. Upon finding that he was unfulfilled with what he was doing with his life, Adam picked up drawing and painting. He loves being imaginative in expressing himself and is now starting his artistic journey. All the work of Adam in this show is drawn from various perspectives, mindsets and incidents that influenced him in the past year.

Angel Sandelson – Angel is currently a final year graphic design student at the London College of Communication. His design practice and the artwork remind each other that the two media are transitory in colour and composition, an alternate room of the sub-conscious.

Inés de Poligny, is a Contemporary Artist, with French, Spanish, Italian and Russian extraction. She was born in 1973.

Her work has been exhibited in cities such as new York, San Diego, New Mexico, Miami and Houston. In Europe, she has exhibited in the Carrousel of the Louvre in Paris, Madrid, Belgium, and in Italy, in Nerona, Sicily, Palermo, Taormina, Rome, Florence and Milano, and England.

Her works are contained within several private collections.
Her love of art, is a way of living, and extends to other artistic facets such as music composition, piano, ceramics, bijoux and classical and contemporary dance.

“In my work I try to represent the sensations produced by the nature of my country, Argentina, in all its strength and vastness.”

The image Ines tries to explore is that of a detail of immensity. A macro shot, if you like. This approach makes the scene, and the idea, one that can be acquired by individuals and made part of them. Ines seeks to inspire awareness that we are a very small part of everything. Only a detail of immensity, but without that detail, the whole would be incomplete. Both elements of this perspective are important.

“In addition, I try to convey a quality that is particularly typical of my country – the way that different realities coexist. Luxury is present alongside real need, the newborn and contemporary exists side by side with old traditions. I try to express this sense of opposites coexisting: dualities of smooth and hard; love and hate; light and dark; intensity and relaxation; fine and crude; vibration and stillness, all presented with the instinct and energy that emerge from a confrontation of this truth.”

The pictorial development of Martina traces a continuity with the way to use the visual device that is especially dear to the twentieth century: her approach aims at creating images and imagery in keeping with a specific social ideal. Martina portrays travelling in search of her own individual freedom as a real, non-tourist movement of people, and her cultural learning has always pursued those parallels, the way of experiencing art for reasons of democratic and self-determination. Recent works are a personal reflection on the ideas of limits, both mental and physical, both chosen (rarely) and placed, and on the boundaries, on short memory, on history’s courses and attractions.

Nahoko was born 1992 in Hokkaido, Japan.

She creates artworks focusing on her own thought as thinks everything is uncertain except for her thought. Her works intertwine the inner world (her relationship with society and her emotions) and the outer world (nature, social, space).

“My work is devised so that it can be seen from multiple viewpoints by giving it multiple titles.

Nayanaa is an economist turned artist, a brilliant colorist with a clear individualism in her art, Nayanaa can be regarded as the founder of the L’Art Naif genre in India.

Musee International D’Naif Art’ exhibits her paintings permanently in Paris. She displayed and illustrated her painting techniques at the London ‘ V&A Museum’ and was included in Reinhard Fuchs’ international book ‘Women in Art,’ a great honor to be named among the most talented female artists in the world. She was chosen from all The Commonwealth Countries artists to have a solo show in their newly renovated London complex in 1998. Impressed with the social messages expressed in her paintings, a school group in Los Altos, U.S.A. is using her work as a learning platform for their students. Her journey is a story of creativity, passion and vision and her paintings are in public & private collections worldwide.

The airs of whimsical, smooth, light polished surfaces and the remarkable abundance of details and patterns that have been complicated distinguish her work. Her paintings will make you feel like you are seeing a snapshot of life with total madness, exuberance and power, idiosyncrasy and absurdity.

“When the world disturbs me and the world that I have an intimate understanding of is amalgamated and absorbed, a new artistic language is formed. The dialogue I hope to create in my work is a certain life reality and a well-thought-out theory on a deeper level. Individuals can interpret my paintings in a wide variety of ways and every view will be just as logical and plausible, thought provoking and intriguing. There is a picture of the moment in which whole lives and relationships are made visible. My paintings are all about time, and motion is stilled in paintings.”

Vikka is an artist who was born in 1982 in France. He has always been fond of music and, in general, of all the street art and pop art movements. His passion in drawing is shown during his calming moments from the earliest days. He reproduces the cartoon characters he sees quickly, and his wild imagination helps him create so many others. Artists like Picasso influenced him at the age of 15. The birth of his first son takes him back to his childhood, the cartoons he enjoys inspire his imagination. A dose of contemplation and maturity coupled with imagination gives him the desire to create his own works, thus begins his artistic project. Self-educated, he loves color and the surreal elements which can be found in his work.

His canvas “The Beginning” is the starting point for everything. This painting includes all of the basic elements of all of his works; the bubbles represent round shapes, soothing and liberating, reminding the lightness peculiar to the childhood. The colours of the rainbow, the last one imagined with an additional colour, the rose being invited to the party. His characters, the bomb and the slug, both appeared in a boom! Allowing him the total completion of his artistic work.

Vikka wants to arouse curiosity and raise awareness among others through his works. He loves versatility in his work and thus, between drawings, sculptures and images, declines his characters. His works are a mishmash of news topics, ingredients taken from his imagination, and tributes to the figures and great artists who influenced him. “Art has no limit,” says Vikka. “It is associated with expression, a way of expressing oneself and exposing the child in us.” The mixture of materials for him is the key word for establishing balance in his works. His artist name Vikka, as a reference to them, is a contraction of his sons ‘ first names. They are a fundamental aid in his works’ growth. A part of the upbringing he wants to convey to a broad audience. His first exhibits are a tribute to his grandfathers, who in the field of art have an undeniable talent. The latter claiming that artistic descent was assured. So born is Vikka.