Working on the premise that too much of a good thing can be a killer, the scientists have advanced previous researchers’ methods of manipulating an enzyme that is key to how influenza replicates and spreads. 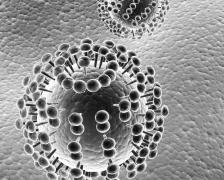 [dropcap style=”font-size:100px; color:#992211;”]S[/dropcap]imon Fraser University virologist Masahiro Niikura and his doctoral student Nicole Bance are among an international group of scientists that has discovered a new class of molecular compounds capable of killing the influenza virus.

You bite the fry and the fry bites back my man

Working on the premise that too much of a good thing can be a killer, the scientists have advanced previous researchers’ methods of manipulating an enzyme that is key to how influenza replicates and spreads.

Their new compounds will lead to a new generation of anti-influenza drugs that the virus’ strains can’t adapt to, and resist, as easily as they do Tamiful. It’s an anti-influenza drug that is becoming less effective against the constantly mutating flu virus.

The journal Science Express has just published online the scientists’ study, revealing how to use their newly discovered compounds to interrupt the enzyme neuraminidase’s facilitation of influenza’s spread.

Tamiful and another anti-influenza drug, Relenza, focus on interrupting neuraminidase’s ability to help influenza detach from an infected cell’s surface by digesting sialic acid, a sugar on the surface of the cell. The flu virus uses the same sugar to stick to the cell while invading it. Once attached, influenza can invade the cell and replicate. v

This is where the newly discovered compounds come to the still-healthy cells’ rescue. They clog up neuraminidase, stopping the enzyme from dissolving the sialic acid, which prevents the virus from escaping the infected cell and spreading.

The new compounds are also more effective because they’re water-soluble. “They reach the patient’s throat where the flu virus is replicating after being taken orally,” says Niikura, a Faculty of Health Sciences associate professor.

“Influenza develops resistance to Replenza less frequently, but it’s not the drug of choice like Tamiful because it’s not water-soluble and has to be taken as a nasal spray.

“Our new compounds are structurally more similar to sialic acid than Tamiful. We expect this closer match will make it much more difficult for influenza to adapt to new drugs.”

Ultimately, the new compounds will buy scientists more time to develop new vaccines for emerging strains of influenza that are resistant to existing vaccines.

Source: Simon Fraser University . Eurekalert Simon Fraser University is Canada’s top-ranked comprehensive university and one of the top 50 universities in the world under 50 years old. With campuses in Vancouver, Burnaby and Surrey, B.C., SFU engages actively with the community in its research and teaching, delivers almost 150 programs to more than 30,000 students, and has more than 120,000 alumni in 130 countries.