Spectral and monochromatic, the post-tsunami art of Kazuki Takamatsu is a more mature form of manga

[dropcap style=”font-size:100px; color:#992211;”]T[/dropcap]wice recently I was reminded of the 2011 Tohoku earthquake and tsunami in which nearly 19,000 lives have since been taken and more than a million structures destroyed.

The first time occurred during a presentation at my son’s school when an engineer from JPL was discussing his work with mobility and robotics systems. While most of his lecture centered around space exploration, he also discussed how his work in this field is helping to better diagnose radiation levels in disasters such as those that occurred shortly after the 2011 Tohoku earthquake and tsunami at the Fukushima Daiichi Nuclear Power Plant. 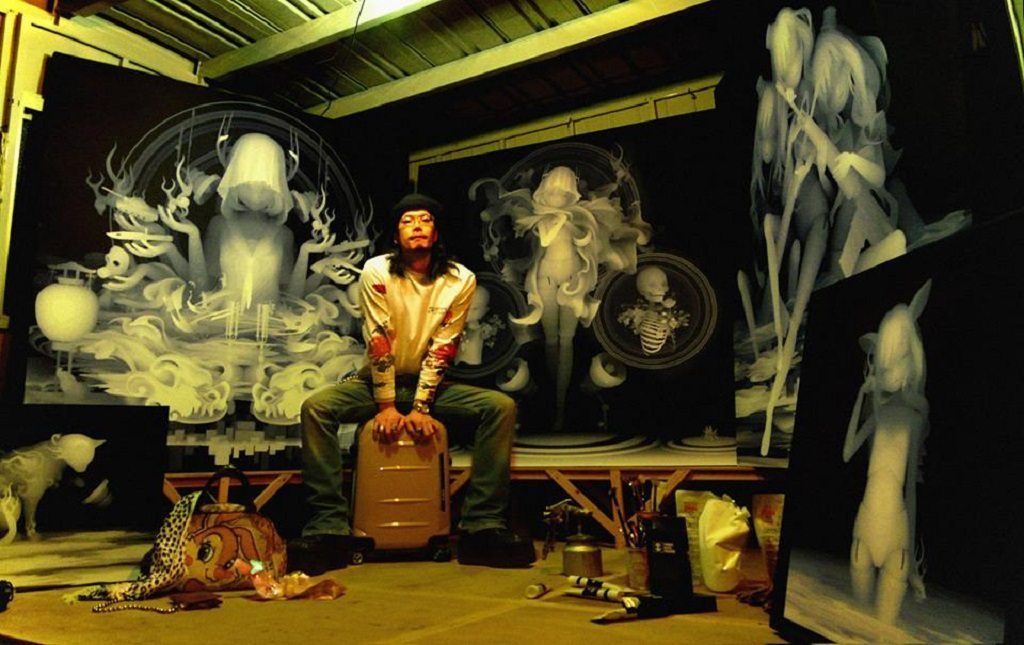 The second time was at Vroman’s Bookstore, where I picked up a copy of Hi Fructose. The month’s issue featured the Japanese artist Kazuki Takamatsu, a resident of Sendai – Japan’s hardest hit region, which remains to this day overwhelmed by the wreckage and ruin that came with the 9.0 earthquake that struck just 43 miles off the Oshika Peninsula.

Takamatsu’s monochromatic depth-mapping paintings have consistently embodied a dark narrative where innocent girls are juxtaposed against haunting motifs of death and despair. Typical (if visually stunning in Takamatsu’s case) otaku manga fantasy fodder. Interestingly, though, since 2011, a subtle yet distinct transformation has occurred in the 34-year-old’s work.

Takamatsu’s figurative paintings still feature what the artist describes as the Japanese female teenager: “a girl who dresses like all her friends and does as she is expected, regardless of the world evolving around her,” as offered by Silke Tudor for Hi Fructose. With doe-eyed figurines as their centrepiece, many of the traits of waifu-fantasy manga are immediately evident in the artist’s oeuvre, the gamine forms set in poses which recall the equally idealised graphic aesthetic of European art nouveau arabesques, artfully draped robes and gambolling flower nymphs.

The difference between Takamatsu’s earlier paintings and those he’s completed more recently though is that his current works depict young women armed with a stronger sense of self (and weaponry – this is, after all, manga-influenced imagery). While they’ve appeared passive in the past, they now read complex. Often ensnared within whirling winds and rising floodwaters emblematic of the 2011 tsunami, they endure and in such, emit a air of perseverance that gives Takamatsu’s work a new and unexpected edge of optimism, as well as an engagement on the part of the artist with the world outside the confines of the otaku imagination.

Next Story:
Everything is nothing but mind: Interview with Jah Wobble