Dominating this compact presentation of large-scale photos, are those from the Spomenik series. They are the explicit monuments – their blanket title, the term in Slovenian. However, paired up against these (lining the opposite wall of Breese Little Gallery) are the island studies (Rock #1 and Rock #2). 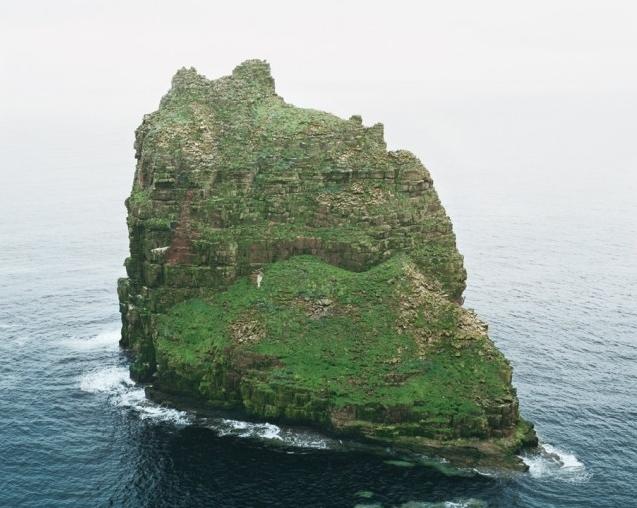 These are natural monuments: the material of sculptures yet made; photographed like objects, pictured not as inhabited land but as large boulders isolated in the sea. Together Jan Kempenaers presents man-made and natural monuments; formed and found stone.

While the Spomenik shots appear ordained by human hands (they are stylised, brutal in their design and reinforced concrete in medium), they refer to no-one. By definition they are monuments – they commemorate people, a place, a time – and yet the evidence is weak since their purpose has passed.

Built in 1960s and 70s Yugoslavia to commemorate the Second World War, they were designed to be pilgrimage sites for a public still aching from the pains of the war, but as the country’s identity changed, so did their care of the Spomenik. Moreover, their design is as valid architecturally as it is sculpturally, housing negative as well as positive space, creating a sense of shelter. 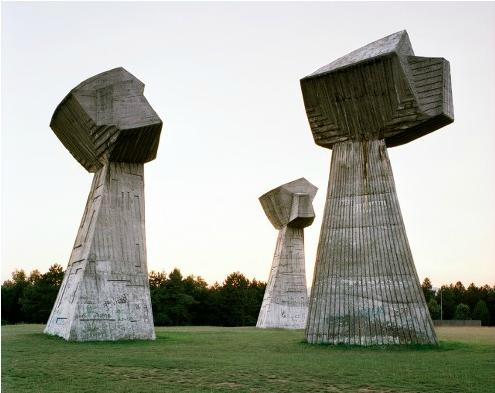 Consequently, looking onto them, we only know they are monuments, because they are called such.

In the centre of the left hand wall of the gallery is the most giving of the series. Above some graffiti, a badge blazons the brawny build. It says ‘1945’: the year the war ended, and the year from the formation of the Federal People’s Republic of Yugoslavia became possible (coming to be in 1946.) The image gives the most immediate clue to the commemorative function of the monument, however as Willem Jan Neutelings points out in his essay on the series, Kempenaers is not a photo journalist. These are autonomous images before they are historic documents.

In the ninth image of the series, we see that flood lights surround the monument at Jasenovac, revealing its need to be seen in order to provoke commemoration. But in the context of Kempenaers’ photograph, it draws our attention to the monument as a self-standing work of art. It is exhibited like a sculpture may be in a museum: lit and against a blank canvas so that the eye can focus on it, and arranged with space around it, so that visitors can circulate around it. The artist has refashioned our approach to the monuments. 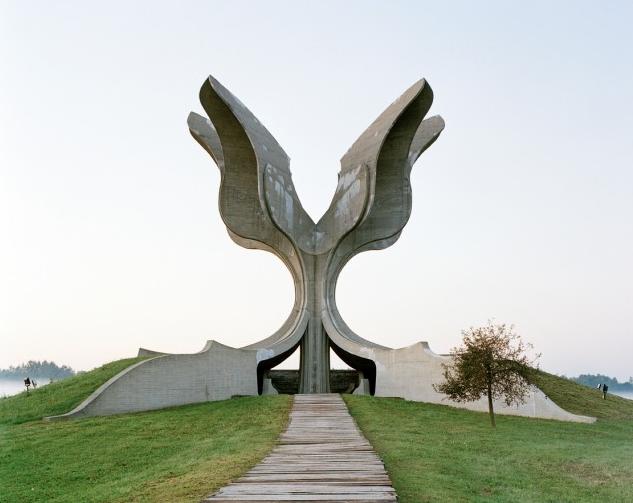 The paths that anchor the composition in its centre were for the approach of pilgrims, now they too only function visually. They give our eye an access route, a way in which we feel we can stand before these structures as a foreigner to Yugoslavia. Technically, the photographer stabilises the composition through these walkways, making the monuments appear grounded.

This is perhaps the only other clue to how long they have been there, and it provides an interesting antithesis to the design of these monuments, which are so un-human in appearance, that they don’t seem to belong where they have been placed. The monuments are visually disarming – unexpected in their appearance and context – almost unreal, and yet the monuments are sure of themselves, and the photographer sure of them.

While all of his photographs are striking, the Spomenik shots are the most intriguing in the show.

Next Story:
Fat foods and the Nordic diet