Trees and the insects that eat them wage constant war. Insects burrow and munch; trees deploy lethal and disruptive defenses in the form of chemicals. 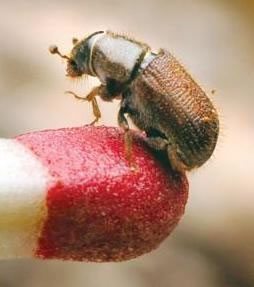 Well not quite but this epic story of global warming and anthropmorphic warfare has the hero’s journey written all over it.

The river will run yellow, slowly, with sap.

Trees and the insects that eat them wage constant war. Insects burrow and munch; trees deploy lethal and disruptive defenses in the form of chemicals.

But in a warming world, where temperatures and seasonal change are in flux, the tide of battle may be shifting in some insects’ favor, according to a new study.

In a report published today (Dec. 31, 2012) in the Proceedings of the National Academy of Sciences, a team of scientists from the University of Wisconsin-Madison reports a rising threat to the whitebark pine forests of the northern Rocky Mountains as native mountain pine beetles climb ever higher, attacking trees that have not evolved strong defenses to stop them.

The whitebark pine forests of the western United States and Canada are the forest ecosystems that occur at the highest elevation that sustains trees. It is critical habitat for iconic species such as the grizzly bear and plays an important role in governing the hydrology of the mountain west by shading snow and regulating the flow of meltwater.

“Warming temperatures have allowed tree-killing beetles to thrive in areas that were historically too cold for them most years,” explains Ken Raffa, a UW-Madison professor of entomology and a senior author of the new report. “The tree species at these high elevations never evolved strong defenses.”

A warming world has not only made it easier for the mountain pine beetle to invade new and defenseless ecosystems, but also to better withstand winter weather that is milder and erupt in large outbreaks capable of killing entire stands of trees, no matter their composition.

“A subject of much concern in the scientific community is the potential for cascading effects of whitebark pine loss on mountain ecosystems,” says Phil Townsend, a UW-Madison professor of forest ecology and also a senior author of the study.

The mountain pine beetle’s historic host is the lodgepole pine, a tree common at lower elevations. Typically, the insects, which are about the size of a grain of rice, play a key role in regulating the health of a forest by attacking old or weakened trees and fostering the development of a younger forest.

However, recent years have been characterized by unusually hot and dry summers and mild winters, which have allowed insect populations to boom. This has led to an infestation of mountain pine beetle described as possibly the most significant insect blight ever seen in North America.

Because lodgepole pine co-evolved with the bark beetle, it has devised stronger chemical countermeasures, volatile compounds toxic to the beetle and other agents that disrupt the pine bark beetle’s chemical communication system.

The good news, he adds, is that in mixed stands, the beetle’s strongest attraction is to the lodgepole pine, suggesting that, at least in the short term, whitebark pine may persist in those environments.

The study, conducted in the Greater Yellowstone Ecosystem, one of the last nearly intact ecosystems in the Earth’s northern temperate regions, also revealed that the insects that prey on or compete with the mountain pine beetle are staying in their preferred lodgepole pine habitat. That, says Townsend, is a concern because the tree-killing bark beetles “will encounter fewer of these enemies in fragile, high-elevation stands.”

Whitebark pine trees are an important food source for wildlife, including black and grizzly bears, and birds such as the Clark’s nutcracker, named after the famed explorer and which is essential to whitebark pine forest ecology as the bird’s seed caches help regenerate the forests.

With their broad crowns, the high-elevation whitebark pines also act as snow fences, helping to slowly release water into mountain streams and extending stream flow into mountain valleys well into the summer.

“Loss of the canopy will lead to greater desiccation during the winter and faster melting in the summer due to loss of tree canopies for shade,” according to Townsend. “This is possibly a short-term effect of the loss of whitebark pine,” he explains “If – and it is a big if – other tree species replace it, eventually this service may be replaced.”

The new study was supported by the U.S. National Science Foundation and the UW-Madison College of Agricultural and Life Sciences. [Source: Eurekalert]