In Bright Axiom: The House of the Latitude

As an introduction to the secret society, this documentary is a disjointed narrative where the whole is less than the sum of occasionally fascinating parts. 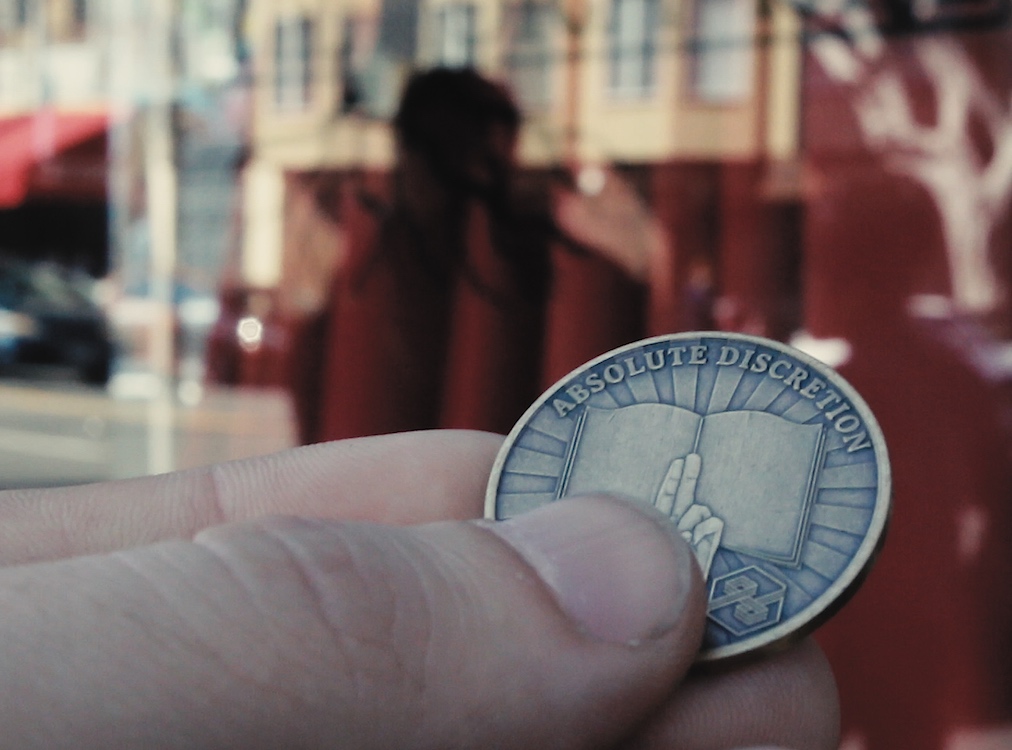 [dropcap style=”font-size:100px;color:#992211;”]A[/dropcap]s an introduction to, or indeed a promotional video for the short-lived House of the Latitude, an immersive theatre experience that is equal parts fake cult, Burning Man influenced performance art and post-structuralist social experiment, In Bright Axiom has many merits.

But, it also attempts to function as a piece of reportage (one that teases but ultimately withholds information) and as a final palliative missive from the society’s founders to its bewildered participants. This lack of singularity of purpose results in a disjointed narrative where the whole is less than the sum of occasionally fascinating parts.

Comprised of talking heads footage, coverage of ‘town hall’ meetings, enactments of the recruitment, induction and ritual experiences of the House of the Latitude alongside sophisticated recreations of the group’s faux mythology, In Bright Axiom is a chimerical beast. Ostensibly directed by Spencer Hall, the film seems to have been produced by committee, listing four screenwriters in the opening credits. It emerges that one of these, Jeff Hull (also the executive producer), is the driving force in the House of the Latitude. Seemingly part Silicon Valley entrepreneur, part charismatic trustafarian, Hull is an engaging presence throughout, spouting earnest self-actualisation claptrap that is as quintessentially New Age and Californian as it is articulate and endearing. Enlisting designers and performers into this, his second foray into immersive theatre, Hull channeled the psychoactive spirit of 60s San Francisco into the House of the Latitude, persuading strangers to go to specific locations where they would be drawn deeper into the arcana of the secret society through elaborate spectacle, bacchanalia and a sense of participatory inclusion.

The fatal flaw of the House of Latitude appears to have been a lack of overarching strategy. Once the devotees had been sufficiently integrated into the House, they were encouraged to help design and plan ‘experiential play’ for new acolytes but with little other instruction the organisation seems to have devolved into a talking shop with bills to pay.

Despite being technically accomplished, intriguing, even beguiling, In Bright Axiom itself is similarly unencumbered with vision; just as the story at its heart — the rise and fizzle of the House of the Latitude — threatens to get interesting the filmmakers cut to the aesthetically pleasing but tiresome fantasy exploits of the House’s mythological founder or the cod-Scientology of encounters with its deities. Compounding the chaotic storytelling are issues of trust; the interviewees are never identified on screen, leading the viewer to question whether their accounts are frank or are part of the fantasy. They are, furthermore, often shown discussing events that have not yet been established on screen. Rather than adding to a deepening sense of mystery the jarring discontinuity of these unreliable narrators robs the film of sustained storytelling momentum. Perhaps most galling is their apparent reluctance to discuss the goings-on of the House of the Latitude too explicitly as they still seem to be honour-bound by the society’s cardinal rule of Absolute Discretion. Noble as this may be in the context of their involvement in the organisation, it makes for a maddening experience for the viewer.

The interviewees’ evident reticence attests to the impact that the House of Latitude had on their lives; there is no doubt that its creators succeeded in creating a magical and moving experience. This documentary about that experience suffers in comparison; it is brimful of stylish visuals and interesting ideas but their scattershot presentation means that they are never satisfactorily developed, the parallel narratives serving to distract from each other rather than providing counterpoints. Hull states that the demise of Latitude left “3,000 people confused and 150 pissed off”. In Bright Axiom will likely provoke a different ratio amongst its viewers.

In Bright Axiom is available on VOD from today. For further information, visit the documentary’s website here.

William Watt is a writer based in Dublin. He has an MBA from Nottingham Trent University and a master’s degree in film studies from University College Dublin. He has been published in Virtual Futures Near-Futures Fiction, had a play performed in the Dublin Fringe Festival, and is currently working on a speculative fiction screenplay.

Next Story:
Researchers Turn to Art for Clues About Changing Fruit and Veg