Concentrations of inhalable particles more than doubled during a major Saharan dust intrusion in Houston, Texas 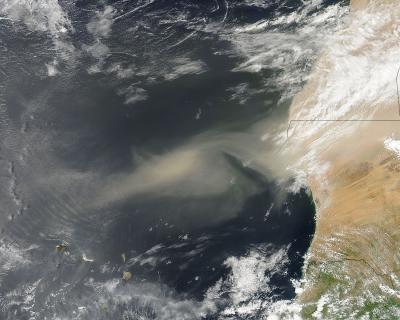 African dust storms in our air

MIAMI, FLORIDA You might find it hard to believe that dust clouds from the African Sahara can travel thousands of miles across the Atlantic Ocean, but it does every year and in large quantities.

In a recent study, Joseph Prospero, professor emeritus at the University of Miami Rosenstiel School of Marine and Atmospheric Science and collaborators at the University of Houston and Arizona State University found that the average air concentrations of inhalable particles more than doubled during a major Saharan dust intrusion in Houston, Texas.

The researchers were able to distinguish between particles transported across the Atlantic and those from local sources in the Houston region. In this way they established the “fingerprint” of the African dust. To their knowledge, this is the first study that isolates, differentiates, and quantifies the air contaminants in the US during the incursion of African dust. There is a concern that the fine airborne dust particles could be a health problem for asthmatics and people with respiratory problems.

“Current EPA air quality standards are based on the total amount of particles that are in the air,” Prospero says. “Our study will contribute to our ability to discriminate and identify the dominant components in the air during long-range transport events,” he says. “Our hope is that our work is instrumental in assisting regulatory agencies respond to health and environmental issues linked to African dust.”

The findings published in the journal of Environmental Science and Technology can also serve to address African dust intrusion in other affected regions of the world. For instance, the Caribbean Basin receives enormous quantities of African dust every year. In addition to its impact on air quality, an important factor for the Caribbean basin is the potential effect of Saharan air outbreaks on hurricane activity.

“African dust storms are associated with hurricane season because the meteorological situations that are involved with generating tropical cyclones are also associated with the generation and transport of dust,” Prospero says. “The dust emerges from the coast of Africa in a hot, dry, elevated layer – the Saharan Air Layer (SAL) following behind Easterly Waves from which tropical cyclones sometimes develop,” he says. “The SAL interacts with the waves in complex way, so that the relationship is not entirely clear. It is the subject of much ongoing research.”

[A cloud of dust carried by strong winds from sources in the Western Sahara. The Trade Winds transport the dust westward to the United States, the Caribbean and South America.]

“Dust activity has been very intense this year and sea surface temperatures are unusually low,” Prospero says. “These may have been contributing factors to the unusually weak hurricane season this year.”

A better understanding of all the processes involved in Saharan air outbreaks would help create models that can predict future trends.

“The question is what happens with climate change,” Prospero says. “Although much of North Africa is expected to get drier, which would mean more dust, models can’t agree on whether the climate in the current major dust sources will get drier or wetter in the future” he says. “We are still trying to understand what drives these differences and the possible impacts.”

Prospero and his collaborator from the University of Puerto Rico make practical recommendations for the creation of a cooperative project that include long-term measurements of African dust occurrences in the Caribbean Basin, in a recent study published in the journal of American Meteorological Society. The scientists hope this collaborative effort will lead to a better understanding of the range and complexity of Saharan dust storms and the impact of African dust on climate and human health.

Next Story:
The Meat Puppets [Live]