Second impact syndrome: A devastating injury to the young brain. Science shows that it’s more or less okay to band kids on the head once. 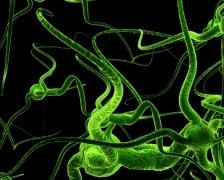 Kids will be kids, however science suggests that strong violence around the head area can cause damage and stuff… pfft what do ‘sciencologists’ know (the big girls’ blouses)?

Charlottesville, VA (January 1, 2013). Physicians at Indiana University School of Medicine and the Northwest Radiology Network (Indianapolis, Indiana) report the case of a 17-year-old high school football player with second impact syndrome (SIS). A rare and devastating traumatic brain injury, SIS occurs when a person, most often a teenager, sustains a second head injury before recovery from an earlier head injury is complete. To the best of the authors’ knowledge, this is the first reported case in which imaging studies were performed after both injuries, adding new knowledge of the event. Findings in this case are reported and discussed in “Second impact syndrome in football: new imaging and insights into a rare and devastating condition. Case report,” by Elizabeth Weinstein, M.D., and colleagues, published today online, ahead of print, in the Journal of Neurosurgery: Pediatrics.

The patient sustained the first injury when he received a helmet-to-helmet hit from an opposing player during a punt return. Despite immediate symptoms of dizziness and visual disturbance, he continued to play in the game. For the next few days he experienced severe headaches and fatigue. Four days after the game, he consulted a doctor about the headaches. Computerized tomography (CT) scans of the patient’s head appeared normal, but he was advised not to return to play until all of his symptoms were gone. The young man chose instead to return to practice immediately.

The following day, despite complaints of headache and difficulty with concentration, the young man participated in hitting drills. After a few hits he was slow standing up, and after several more hits he collapsed, became unresponsive, and suffered a seizure. He was transferred initially to a local emergency department, where a CT examination revealed small, thin subdural hematomas on each side of the brain. The patient received intubation and was treated medically. Shortly thereafter he was airlifted to a tertiary trauma and neurosurgical center at Indiana University Health Methodist Hospital in Indianapolis.

At the tertiary center, the patient was found to be minimally responsive and to have increased intracranial pressure (25-30 mm Hg; normal 5-15 mm Hg). Additional CT scans obtained there confirmed the presence of the subdural hematomas and mild cerebral swelling. Magnetic resonance images of the brain and upper spinal cord showed downward herniation of the brain, subdural hematomas on both sides of the brain, and abnormal diffusion in the medial left thalamus. Structures in the vicinity of the brain’s midline, including the thalamus and hypothalamus, had shifted downward. There did not seem to be any blood vessel damage or spinal cord injury. The MR images did not detect cerebral edema.

The patient’s injury involved other serious consequences identified during the hospital stay, including prolonged elevated intracranial pressure, areas of brain softening (in both thalami, the medial frontal lobes, and elsewhere), hypotension, renal failure, sepsis, pneumonia, and temporary cardiac arrest. Even with optimal care, the patient remained in the hospital for 98 days and was unable to walk or talk when he was discharged. Three years later, he has regained much of his speech but is very impulsive and is confined to a wheel chair.

In SIS, the brain injury produces a loss of cerebral autoregulation. Cerebral arteries widen, allowing more blood to flow throughout the brain, and massive cerebral swelling can occur. These lead to increased intracranial pressure, causing the brain to enlarge. Because the skull is a limited container, the brain can become herniated as it seeks a space to expand. The authors note that some investigators previously postulated that the loss of cerebral autoregulation is caused by a “space-occupying injury” from the initial injury. Findings in this case do not substantiate that claim because the CT scan was normal. Weinstein and colleagues point out that several types of injury do not necessarily register on an imaging study, and ” a normal head CT scan does not obviate the need for close clinical follow-up and for the athlete to be cognitively normal and asymptomatic before return to play.”

In this case, the patient experienced severe headaches throughout the interval between injuries. The authors state that evidence of persistent, long-lasting, severe headaches, which have repeatedly been identified in patients with SIS, indicate an ongoing and significant pathological neurophysiological condition in the absence of evidence on the CT scan. The authors suggest that this symptom may be a specific predictor for the possibility of SIS if a second injury occurs before the first has resolved.

The take-away message in this study, according to coauthor Dr. Michael Turner, “is that there must not be a return to play if the athlete is at all symptomatic. A normal CT scan will not identify a patient who can be released to play. The mechanism of SIS is probably hyperemia [increased blood in the brain], not occult hematoma.”

SIS rarely occurs, but when it does the effect is usually devastating. Often the patient dies. The authors stress the importance of educating coaches, athletes, family members, and treating physicians about the risks and possible consequences of sports-related head injuries.