[dropcap style=”font-size:100px; color:#992211;”]I[/dropcap]
f you follow the death metal scene, particularly the European one, you will have heard of Katalepsy and understand just why they are hyped so much.

They aren’t being proclaimed as the saviours of death metal, nor are they single handedly rewriting the rule book on what it should sound like and how to play it either…. So why all the fuss?

First off, this is a band from Russia. You know, that big ass country spanning two continents with a crackpot leader who rides topless on horseback with a hunting rifle (and who, if you were to put a ginger wig on him would have an uncanny resemblance to Dave Mustaine)? Yeah that place. The place where bands like Behemoth ran into difficulties due to their image, their lyrical themes and the staunch opposition of Orthodox Christians. Other musical difficulties include “#FreePussyRiot” (remember that crusade?) and the fact the country has a very rigid and questionable ‘system’.

You could wonder how a band like Katalepsy, playing the kind of music they do, could flourish. But, political squabbles and outlandish hypotheses aside… they have. With several splits and one full-length to their name, the five piece are set to unleash one of the most anticipated releases of death metal in 2016. With Aborted seeming to have set the standard with Retrogore, can the Russians match or even surpass that marker?

A scene setting instrumental opening track serves as an extended intro to the first actual track, “In The Dark Of Stars”. 80 seconds of anticipation melodically rises like a wave, growing in prominence with a rich bassline, haunting clean melody and subtle ambience, before it explodes to life with a ferocious wall of distortion.

“Blindead Sultan” is an intense explosion of technical and brutal death metal. A terrifying pace, relentless waves of blastbeat-fuelled drum grooves and intense riffs are delivered with pinpoint precision. The musical component of Katalepsy is as tight as ever. Vocals are raw, deep growls radiate with power and intimidation. When mixed with the music, it creates a malevolent sound which is, if this kind of metal is your thing, rather splendid. Blistering pace riff sections segue to grooves, to almighty slam breakdowns with earth shattering guitar and bass. This group keeps you guessing what will come next. An angular solo, seemingly lacking direction but working well with its awkward feel and sound, paves the way for a huge explosion of riffs and blasts, leading to an intense drum dominated outro of brutal proportions.

“To The Lords Of Nihil” allows for no recuperation period. With that pinpoint precision and intense sound, the Russian five piece continues to lay siege. What initially seems to be a cacophony: jarring guitars, thundering bass and relentless drums, soon creates a truly colossal sound, driving up the heaviness significantly. The speeds which this track hits are phenomenal, especially when you focus in on the drums, whilst the vocal approach is even more intense. The power felt previously takes a sinister turn and with some more tortured sounds, it really drives home just how brutal Katalepsy are.

“Critical Black Mass” is another blistering sonic assault. Machine gun bursts dominate the initial rhythm with that terrifying guitar sound, but its when it gets into the main bit of the song… it comes alive. A furious death metal groove, perfect for headbanging to or letting loose in the pit. It sounds fucking tremendous! Everything you want in a brutal, technical, groove-laden sonic assault, and the way it just keeps going, hammering riffs, rumbling bass and ridiculously precise and fast drums, it is something to behold. Intricate and chaotic leads up the urgency, as the raw growls of the vocals add the evil. The outro is just a maelstrom of chaotic, death metal heaviness, fading out into just a raw vocal line and feedback.

If you were hoping for a moment of respite after the intense opening wave of tracks, “The Long Bright Darkness” doesn’t offer it. Coming right in with drums and riffs growing in volume, the bass and vocals join, making their presence felt and all combine to deliver a straight up groove-laden assault of brutal sounds. Perfectly paced and arranged, the rhythm section hammers away with a headbang-friendly groove whilst the vocals and lead add the flavour, spicing it up. As with the other tracks, it explodes to life, getting faster, in parts slightly changing the groove, adding pinch harmonics here and there with atonal ringing chords just to keep the unease. In a track like this, you have to find the ‘little moments’, one such being at the 1:50 timestamp. A terrifying low guttural growl, somewhat like a demon surfacing from hell, signals the start of an intense, complex and furious breakdown section. Twisting riffs, intricate lead melodies, harsh growls and a spiralling bassline drive the track into one of the best technical death metal passages in a long time. Of course, it returns back to the intense groove and blasts to end, but that spell from 1:50 to 3:10 nails it perfectly.

“Monastery Of Nothing” sets a blistering pace from the off. After the chaotic intro, it smashes head on into a tremendously heavy groove approach with plenty of weight behind it. Like a jackhammer, it just hits hard and doesn’t stop. Harsh sounding riffs ring out over the relentless drums, but the technical mid-section is on another level. Twisting bass solo, intricate lead lines and complex drums give a slight break from the chaos, allowing for a melodic lead, but it returns to the explosive groove, this time with a little more flair and more noticeable bass leads. Increasing in pace and complexity, the track takes on a life of its own; intimidating and intricate before it descends into a full-on slam section, bringing the heaviness factor right up there with some whiplash inducing headbang grooves. A joyous way to cap the track.

“After Omega” is your classic brutal death metal number. Raw and guttural vocals dominate the lively groove which hammers away with some intricate bassline fills, furiously buzzing guitars 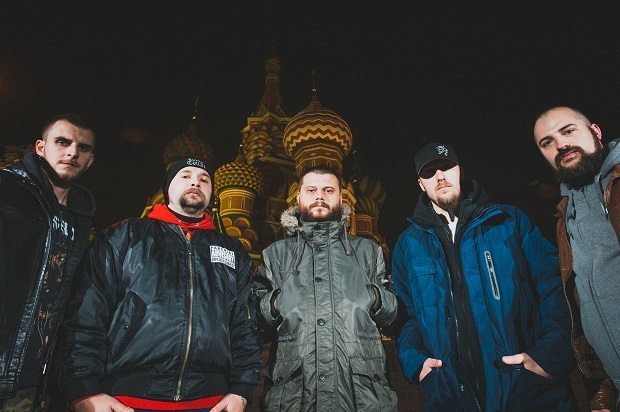 and full on blast drums. It begs for windmill headbanging and intense pit action. This track has all the makings of a live anthem. The sound is terrifyingly powerful and, for a moment, I had to make sure this was Katalepsy and not Aborted – the sound is so similar. Much like their Belgian counterparts, Katalepsy deliver the brutality with ease, making it sound simple whilst being anything but. The chugs into nimbly-delivered buzzing riffs and fills, which lead to hammering, bass heavy blasts and groove drive the intensity right home. This track would be the perfect way to introduction to Katalepsy. It has it all, delivered with precision.

“Grave New World” keeps the brutal, fast paced groove attack. Heavy and relentless, it refuses to give any ground. Pummelling away with sledgehammer like blows from the drums and bass, it shows no mercy. Ghoul Inquisitor” is another tremendously fast, blast-laden track. Think of a cheetah dosed to the eyeballs on PCP and injected with more steroids than the late 8os WWE. It takes off and just does not stop. Truly terrifying with its fast paced delivery, the blasting alone will pummel you into submission. Add in the power from the vocals and the thunderous guitar and bass assault… the track is a carnivore.

‘Tephra” is the penultimate track of the album. The heaviness persists, hammering away one last time with brutal,  merciless grooves and a ferocious death metal edge. Riffs, drums, thundering bass and raw vocals in a vicious assault which highlights one important fact – Katalepsy mean business.

Rounding off the album is another short instrumental track which is more like a refrain or extended outro. “E River Of Red” brings back that ominous feel from the initial instrumental, coming in from the howl of feedback which ends the previous track. Sliding into an evil groove with thundering bass and tight drums, atmospheric guitars drive the sound over the ever impressive rhythm section, in a way bringing the album full circle.

For a second full-length album, this really demonstrates just how proficient the Moscow-based five piece are at their style of music. With a sound similar to their contemporaries and icons, but with a delivery which makes them stand out from the crowd of brutal and technical death metal groups, Katalepsy are staking a claim as the true powerhouse of Death Metal. Alongside the likes of Aborted, Kataklysm, Prostitute Disfigurement and Cattle Decapitation, these young Russians are spearheading the death metal movement.

Gravenous Hour is a 40 minute slice of brilliance. It may lack the accessibility of the melodic side of the genre, or the grandeur of the symphonic and progressive realms, but when it comes to straight up intensity, aggression and power… Katalepsy firmly stand their ground with the cutting technical delivery of their brutal tones.

Next Story:
If You Knew Where a Hand Had Been, Would You Still Shake It? In-hand Eye Improves Robotics