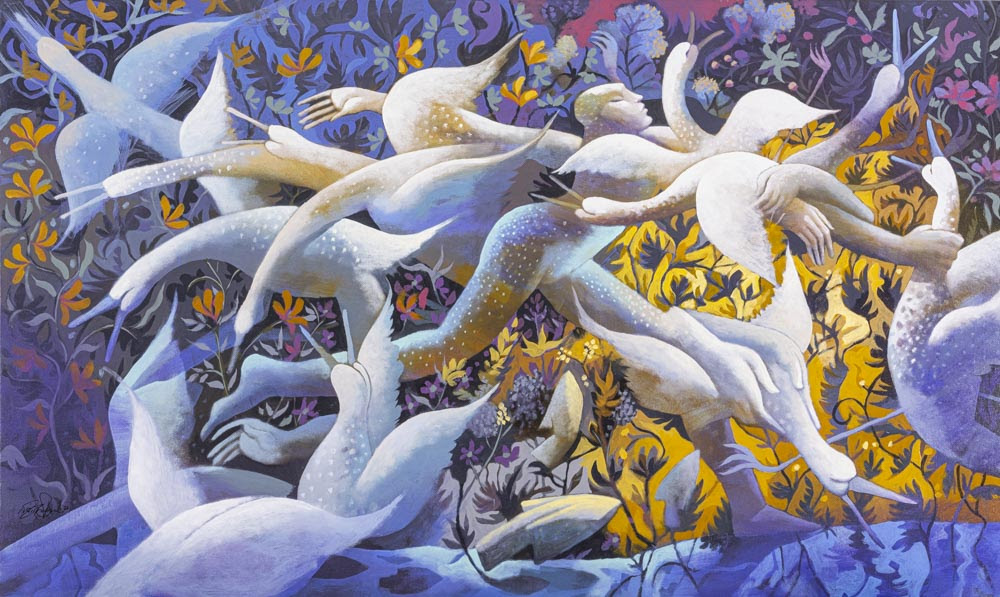 Nazir Tanbouli’s work has the mark of a different era. For viewers corralled by the ‘look only 5-years behind’ amnesia of Western contemporaneousness in art the call-backs in his work might not be immediately apparent. Nor what they mean. Does a hint of Rousseau reference the French dream of African colonialism? Do the fluid geometries and curving wings remind us of Islamic calligraphy?

The boundaries between these syncretic elements either through the painter or through the viewer give us something often lost in Contemporary Art’s populism, rigid content.

The immediacy and efficacy of Tanbouli’s work draws us in, and looking closer, under the loose ease of his compositions are sure signs of a skilled draughtsman. Note the squarish balance in light and contrast in ‘gate keeper’ compared to the metamorphosing ‘X’ in ‘the gees thief’. The relationship between compositional geometry, focus of attention, narrative flow and direction within context and premise contains the richness that Tanbouli seems to deliver without breaking a sweat. What doesn’t get translated on the screen is scale. With some works at two meters wide the depth and impact of these works suggests an IRL viewing would be rewarded. Not least because there’s a singularity to this work which stands out against the samey Instagram scroll which has seemingly bleed onto the walls of many galleries in 2022.

The timing of this show against the backdrop of the pandemic, of internal mythic vistas, and visual reminders of Diego Riviera, Frida Kahlo, John Byrne and Alfreda Benge through their use of geometry and tableau, symbolism, neo-renaissance miasma, and naive archetypes respectively is sure to provide ample fuel for deeper discussions to come (see Trebuchet 12).

Monumental, hybrid figures appear as if carved from dark stone amid autumnal woodland scenes where white doves swoop between the trees and the animals appear anthropomorphic in their human qualities. These are the modern mythologies of Egyptian artist Nazir Tanbouli whose practice taps into visions of his unconscious mind to create dream-like compositions that seem to drift between reality and dream. Tales from the Golden Forest, the artist’s first solo exhibition with Kristin Hjellegjerde Gallery, brings together a captivating new body of work that centres around feelings of harmony, hope and togetherness.

For Tanbouli, each work begins from a point of chaos: he never plans his compositions, preferring to see what emerges through quick, instinctive gestures which are initially made with chalk. Through this process of play, he believes he is able to connect more closely to his emotional states – feeling – unhindered by the anxieties and judgements of the rational mind. As such, each painting serves as a very personal portrait of the artist while also appealing to a shared emotional language that’s rooted in the body and our connection to the world around us. ‘I believe in the shamanic practice of art,’ he says, ‘that art can have a healing power for both the artist and anyone who encounters it.’

The symbol of white dove, which recurs throughout the paintings in this latest series, hints at this idea of reparation. Traditionally associated with peace, love and freedom, the doves appear almost as guardians, encircling the figures and guiding the gaze across the surface. In the painting Riding with the stag, for example, which depicts a naked female figure lying across the back of a stag, the positioning of the birds accentuates the curves of her body while also serving as a light source. Beneath their wings, her skin appears luminous while the leaves of the trees become golden. In this painting, as throughout the exhibition, the natural and the human world appear in total harmony: the antlers of the stag echoing the shape of the branches while his body is etched with purple flowers. Similarly, in the painting titled Dance, the figures appear almost as if they have emerged from the earth, their silhouettes both solid and translucent as they fade at the waist into the swirling yellow landscape that surrounds them.

Elsewhere, the figures take on a more fluid, spectral quality. In the large-scale work Egyptian graffiti fragmented images of rooftops and chimneys, disjointed tumbling limbs, curved calligraphic lines and fish appear overlaid in a nocturnal colour palette of dark blues and white that suggests a dream-like state. The composition is charged with movement and while the cooler tones evoke a slight sense of melancholy, there is also a feeling of lightness: the imagery is, for the most part, translucent while the motif of the dove gestures at the idea of release, of letting go and moving into the future.

‘I believe that by producing uplifting paintings, I’m able to communicate not so much a specific message but an atmosphere or cadence, like music that evokes feelings of positivity,’ says Tanbouli. At a time when so much of the world is wrought by political divisions, conflict and a disconnect from the natural world, Tales from a Golden Forest offers a soothing sense of wholeness and hope.

Previous Story:
Art is like a Love Affair: Tina Grønning

Next Story:
Walking into Modernity