First performed in 1896 in Paris at the Theatre de l’Oeuvre, the production rejected traditional reality-emulating theatrical techniques, instead embracing and amplifying the constructed nature of this art form. Jarry shocked viewers with vulgar language, violence, nonsensical content and unconventional costumes. This avant-garde precursor to the development of Dada and Surrealism paved the way for a new experimental approach to cultural production that would come to characterise 20th Century Modernity. 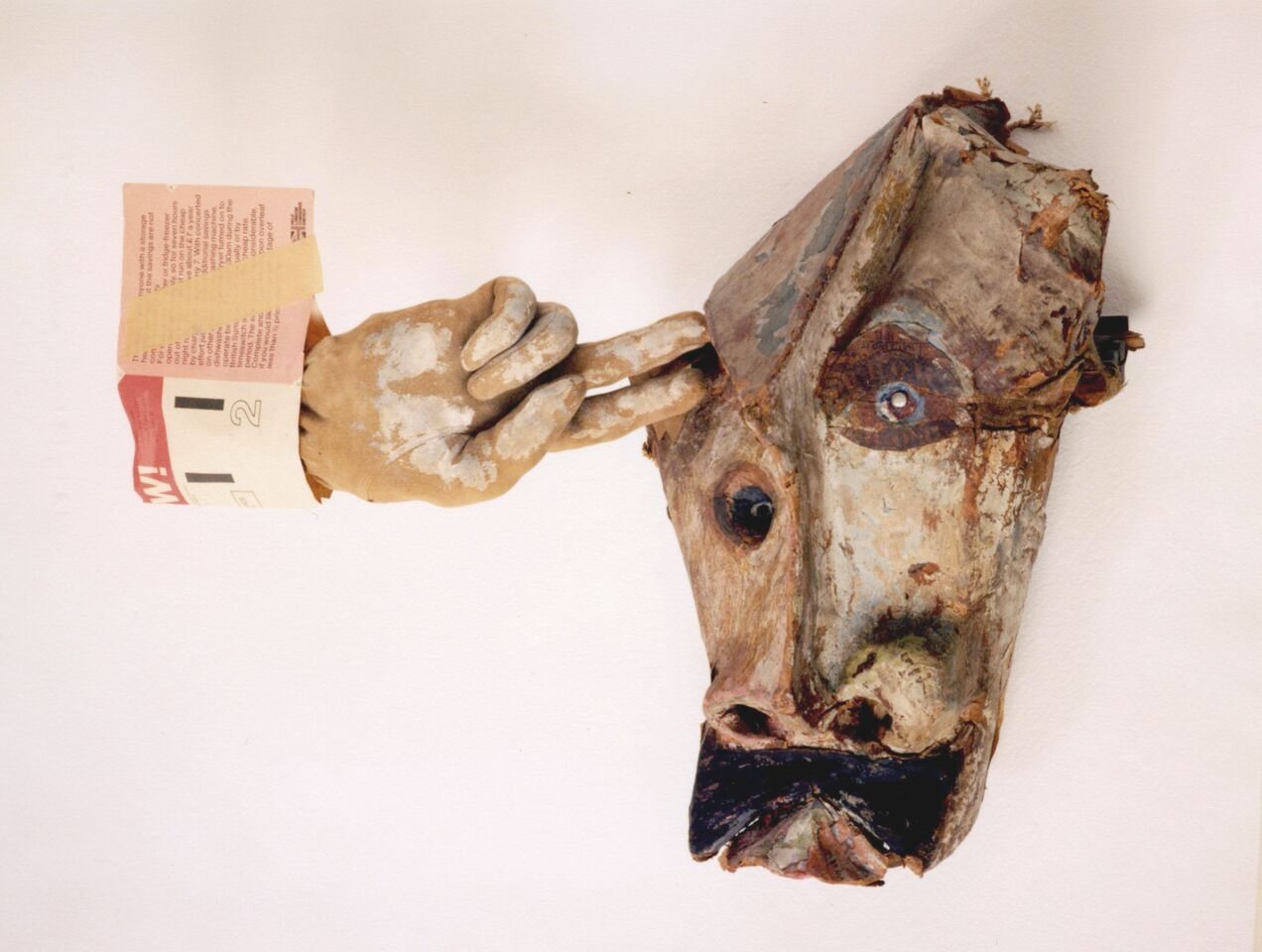 Themerson (1907-1988) was a Polish artist, filmmaker, illustrator, theatre designer and book designer. She collaborated with her husband on avant-garde films in the 1930s whilst living in Warsaw and later in London in the 1940s. Whilst still in Poland, Themerson became fascinated by Ubu Roi’s influential absurdity and subsequently dedicated much of her artistic career to the play’s visual evolution. She illustrated and published the first English translation in 1951. Themerson also created papier-mâché masks for the first English reading of the production in London at the Institute of Contemporary Art (ICA) the following year, designed the set and costumes for a 1964 performance in Stockholm at Marionetteatern and later created a comic book version of the play in 1969-70. Her central role in establishing the creative identity of Ubu Roi is made evident throughout the exhibition, which displays much of this content, including the artist’s comic drawings, masks, theatre posters, performance documentation and other ephemera.

The exhibition begins with a collection of archival material, including several pages from the first English version of the play that are decorated with Themerson’s pencil illustrations on bright yellow pages. Her cartoon-like drawings convey the playful and obscure nature of Jarry’s production. This style persists throughout her later works, as evidenced in nearby illustrations from 1969 and photographs of the unusual stage she created for Marionetteatern. Other notable documents include a copy of the original 1896 French version of the play and a flyer for the 1952 performance in London. This content establishes the depth and variety of Themerson’s creative production for Ubu Roi, whilst also giving insight into the play’s unconventional content.

Continuing this documentative approach is a vitrine around the corner filled with Themerson’s published comics of the play and loose cartoons on ripped fragments of paper, as well as images of the artist at work in her studio in front of a board filled with similar drawings. The gestural style and haphazardly fashioned edges of the cartoon sketches evoke a rapid, intuitive approach to their creation, suggestive of the artist’s intimate and obsessional focus on Ubu Roi. Similar drawings of scenes from the play in pen, ink and pencil are collaged together in a series of nearby frames, each a microcosm of organised chaos with no conceivable narrative. Other drawings in the room possess similar irrational qualities, such as one displaying a man reading a newspaper while a much larger gentleman sits on his shoulders. Alongside these sketches are eleven masks Themerson created for the London performance at the ICA. Individual vitrines incase each object in a cluster along the wall, creating a cabinet of curiosities-style display. This theme is further suggested by the rough strokes of paint in muted, earthy tones that render the works similar to tribal masks. Perhaps non-coincidentally, similar “primitive” artifacts were of great interest and inspiration to many Surrealists and other Modernist artists, including Picasso. The distorted and exaggerated facial features of Themerson’s masks intensify their exotic qualities, whilst also reflecting the caricatures that appear in her cartoons and in the Marionetteatern production.

In the following room Ubu Roi is brought to life in footage of the Stockholm play and in drawings that appear more sequential than those previously seen. Both are aided by an explanation of the rather straightforward plot line involving Ubu overthrowing the king of Poland and causing chaos as ruler, which eventually forces him to flee the country. Whilst withholding these details in the first room amplifies the nonsensical themes, it would have perhaps been helpful to provide a rundown of the story at the beginning of the exhibition to enhance audience understanding and engagement. Despite this, the artist’s unbridled dedication to Ubu Roi and to the dissemination of Jarry’s vision is vividly felt throughout the exhibition, transporting the viewer into a world of whimsy. Playful, muddled, unconventional and eccentric, this collection of Themerson’s works is certainly a fitting visual ode to the avant-garde.

Next Story:
How Do Your Gut Microbes Control You?