Mellow Yellow, Pretty in Pink. The Science of Flower Colour

Don’t know if I’m coming up or down.
Am I happy or in misery?
Whatever it is, that girl put a spell on me.

Flowers come in all sorts of colours. Including purple.

Roses are red, violets are blue. Everybody knows that, but what makes them so? Although plant breeders were aware of some of the genes involved, there was as yet no quantitative study of how pigment turns a flower red, blue or yellow. Casper van der Kooi conducted just such a study, combining biology and physics.

In a paper published in Proceedings of the Royal Society B on 11 May, he describes the process by which cell structures inside flowers scatter light, and pigments filter this backscattered light, producing colour. ‘We recently published a mathematical model describing colour formation, and in this paper we apply it to a number of plants’, says Van der Kooi. He also combined his findings with information about the visual system of insects, thus revealing the anatomical tricks plants use to attract insects.

Flowers need to be visible to insects, so reflecting light is important. Nevertheless, Van der Kooi’s measurements and models show that a mere 20 to 50 percent of all light is reflected. The rest passes through the petals, giving them a pretty translucent appearance. But what advantage does this offer the plant? ‘None, as far as we know. Most petals are seen by insects from above.’ This leaves two possible explanations for the poor reflection level: either flowers are unable to reflect more light, or there is no added benefit in doing so.

Van der Kooi’s work shows that there is a great deal of variation in the amount of light scattered by flowers, 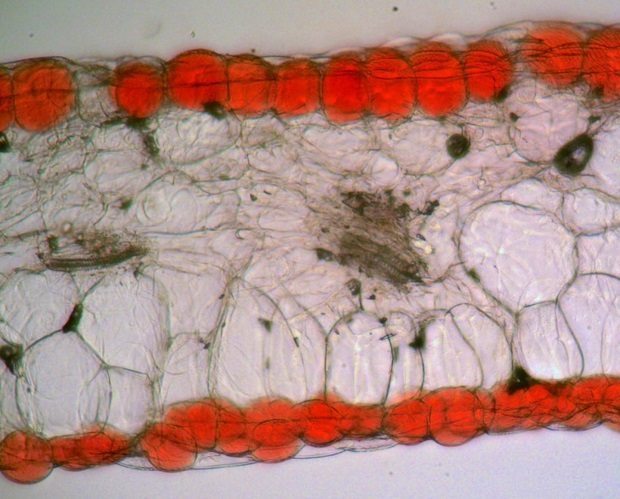 leading him to reject the idea that flowers are unable to reflect more light. ‘But we also know that the insect visual system corrects for differences in intensity. This is an important adaptation: insects need it when flying from a dark forest into a sunny meadow. They select flowers on hue and colour saturation, but not on brightness.’ So reflecting 50 percent of the light is enough to attract insects, as long as the reflected light has a distinct hue thanks to the filtering effect of pigments.

However, producing more pigments than strictly necessary is also not a good idea, as this requires quite some energy. This is why pigments are organized into layers for maximum effect. ‘For example, plants with flowers close to the ground, such as the Herb-Robert, only have pigments on the upper side of their petals.’ Other flowers, such as poppies, do have pigments on both sides because they need to lure insects from two directions.

Van der Kooi describes how pigment concentration and localization combine with a flower’s internal structure to affect its colour. ‘We are the first to study this phenomenon’, he says. ‘An important reason is that I was able to work with biologists and physicists with an interest in colour, which is quite unusual in our field.’

Apart from its novelty value, what does this research have to offer? ‘This information could be of interest to plant breeders, since we uncover a number of mechanisms that affect plant colour.’ Furthermore, the models created and used by Van der Kooi are interesting for evolutionary studies. ‘We can help explain how different light conditions, such as a forest versus a meadow, lead to different ways of tuning colours. By taking the visual system of insects into account, we can explain how flowers fine-tune to specific pollinators. This phenomenon has already been studied, but mostly from a qualitative perspective, not using quantitative methods as we did.’

Previous Story:
The incomprehensible and the incomparable. (The Fall)