The incomprehensible and the incomparable. (The Fall)

A review of The Fall, Monday 25th April 2016 at The Garage, Islington

My mentioning that this was my first time seeing The Fall was barely believed ‘Fucking hell’, spat with wide-eyed incredulity by one attendee, ‘What have you been doing with your life?’.

Fans of The Fall have a reputation for falling into one rabid group. 40-something completists to whom all else is naught. Anything less and you’re considered something of an ignorant tourist. Are you not intimately familiar with all of their recorded output since 1978? It’s only 30+ releases (not including EPs, live albums, rarities, and Mark E Smith’s spoken word stuff). 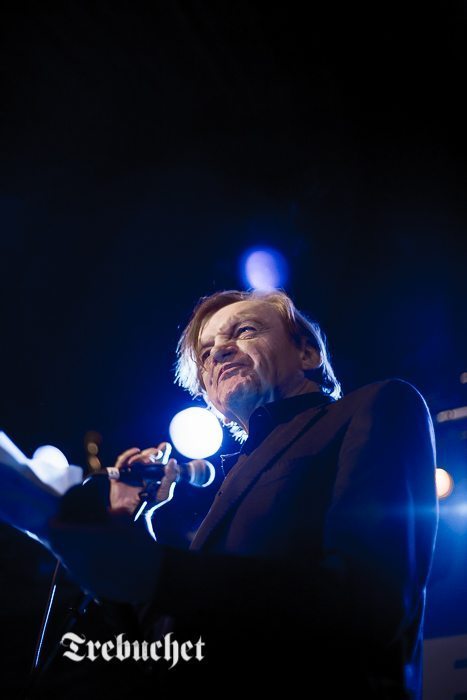 Despite the canon of The Fall extending far into the last century, at any given show you can expect a predominance of the material from the most recent albums. As the late John Peel once said of The Fall ‘They are always different and always the same’. The band will always play new material, which always contains elemental properties of The Fall: repetition, angular guitar and, of course, Mark E Smith. However, it never quite sounds the same. Smith recently (jokingly) remarked that he wished his audience was made up of people 40 and under. He has no attachment to old ideas.

An example of this is that on the Monday show at the Garage there weren’t any contemporaries on the bill. Supports Phobophobes and Shame weren’t obvious choices to play warm-up.

First act Phobophobes have been building a steady fan base through a series of video releases through their combination of dark psych-indie and a tight rhythms. It’s rewarding to see a new London group eschew the bullshit and eyeshadow of the standard issue guitar-pop for something with wider and deeper vistas than an anodyne spot on an NME showcase stage.

In a similar vein the South London/North Kent Shame have ‘it’. Acne-ridden angry youths exuding genuine violence and teenage intimidation, these thift-store pub rockers took cheap suits and council estate pride in their evocation of Dr Feelgood’s angry R’n’B. Producing one of the most riveting performances I’ve witnessed, the lead singer swaggered and strutted his way through a jaw clenching set of pounding energy. Starving fans of visceral rock take note, Shame are delivering the goods.

Finishing with a roar and a clang Shame finish, and after some roadie based milling about, The Fall… well, they aren’t actually here.

Minutes tick on before a security guard whispers to me ‘they’ve just arrived’. Relishing a pint and a chat, people relax. Of course the band WILL play, it’s just a case of when it suits them. No strangers to Smith’s ways, it’s tacitly understood that he’ll take the stage when he’s ready.

And then it begins. A hard simple drum beats, strikes up the crowd, and is joined quickly by a thick pulsing bassline. With a cheer Mark E Smith takes the stage, smiling with amiable beneficence. It’s the look of a man reaching home. However he may be in the pub or in an interview, with his band playing, to his fans, you a get sense he’s as satisfied as it’s possible for him to get. Jagged guitar slashes across the liquid rhythms and then, more an instrument than a voice, Smith begins.

Listeners to the band’s latest, Sub-Lingual Tablet, may well recognise the tunes, but Smith’s vocals are beyond ready comprehension. It doesn’t matter. A bouncing fan tells me ‘Buy the album if you want to hear the lyrics’, and he’s right. Few acts achieve the sort of total experience that you receive on seeing The Fall. Never slowing down, songs bleed into each other as energy levels increase. MES prowls the stage, feeding the crowd, handing one of his mics to the front row, adjusting his amp, tweaking Elena’s keyboard, retuning the guitar while it’s being played, mucking about. It’s all one. 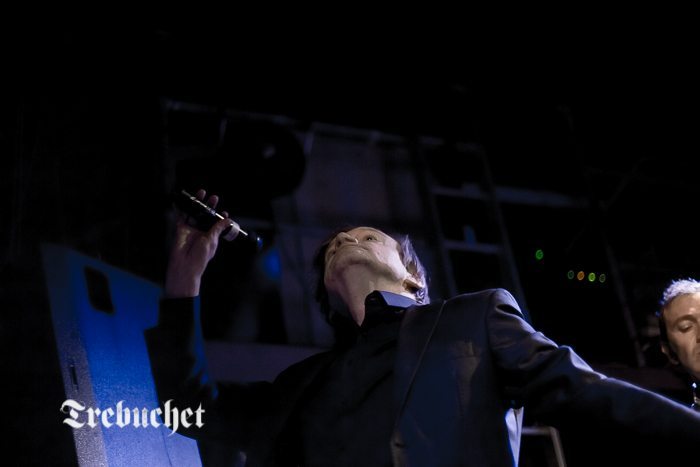 Having never seen The Fall before it’s hard to say how it rates. With this band people have their favourite line-ups, periods, venues, moods, whether Smith drank too much or too little, the day of the week. All are liable to drastically change what aspect of The Fall you get.

From this perspective then, everyone left extremely happy and I bought a T-Shirt. The show will never be repeated. You should have been there.

The Fall Played 25th April 2016 at The Garage Islington supported by Phobophobes and Shame.

Next Story:
Mellow Yellow, Pretty in Pink. The Science of Flower Colour