Beyond the Big Four. Unheralded but Solid Thrash (Flotsam & Jestsam)

Will it float, or should we jettison it? Flotsam & Jetsam dish up the thrash.

[dropcap style=”font-size:100px; color:#992211;”]A[/dropcap]s is often the case, in any genre of music you have the easily-recognisable and standout bands, the downright terrible, the average, and those who fly under the radar.

Those latter bunch are often the hidden gems, dark horses, the severely under rated and the criminally overlooked. Thrash metal is no exception to this phenomenon. You have the ‘Big Four’ (Metallica, Megadeth, Anthrax and Slayer) and then the ‘Teutonic Four’ (Kreator, Destruction, Sodom and Tankard) who are the flag bearers for the genre and the sound. Then you have the downright awful which, funnily enough, includes Metallica, the most commercially successful of the thrash bands. (They ceased being Thrash after 1989 folks, stop calling them thrash!). The dark horses though… thrash has plenty of them. Exodus, Testament, Overkill, Sacred Reich, Armored Saint, Dark Angel and… Flotsam & Jetsam.

To the casual metal fan, Flotsam & Jetsam are best known for being the first major band Jason Newstead featured in before joining Metallica, but they are a band who have much more to them than this simple statement. Musically solid and with a rich history over a career which began in 1981, this formidable thrash machine has gone through many line up changes, but ultimately, it has always consisted of vocalist Eric ‘A.K’ Knutson. 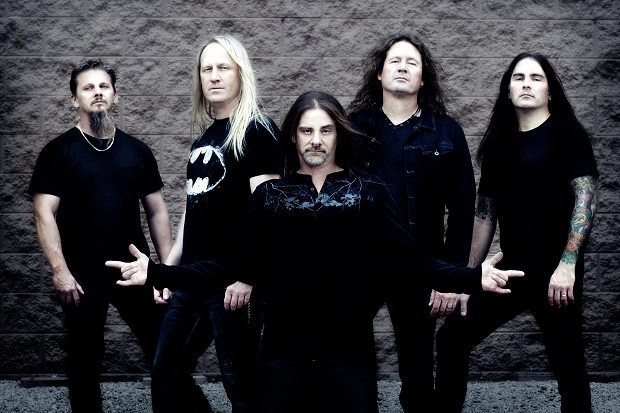 After some successful European tours in recent years, the band have gone back to the studio and return to remind everyone that ‘Flotsam & Jetsam’ aren’t just maritime terms for discarded cargo or wrecked ships.

Opening up the album, “Seventh Seal” cuts like a scythe. The electrifying, atmospheric middle-eastern riff intro with a solid pounding thrash groove builds a steady foundation and when it heads into the verse, is full on thrash galloping. Dramatic themes entailing the end of the world according to the Book of Revelations are conveyed brilliantly through the raw and powerful vocal work, and the story of the rise of the horsemen surges on, much like the galloping thrash riffs. Venomous accenting where needed brings more power to the vocals and that epic feel just radiates from all the track. Hypnotic leads, urgent fills and some sublime lead work make a fantastic musical backdrop for the apocalyptic tales in the vocal lines. A great opening track, full of classic thrash feel and headbanging groove!

“Life Is A Mess” has a pounding feel. The deep, booming bassline really shines out underneath the cutting riffs, and the high speed delivery really brings the track to life. With a venomous edge to the vocals, a scathing assault on life and happiness conveying the idea that no matter what you do, life will always be a mess, really hammers home how futile this existence can sometimes be. Taking a slight lyrical shift, it moves on to the power of live music and how it can change the mood completely, detailing the exultation of going to a gig and letting loose in the circle pit (something I am a firm advocate of). Urgently paced, frantic and cutting, the musical delivery is solid and makes for a great backdrop to frantic mosh pit action, be it the blistering riffs or the classic pedal tone styled thrash riffing. It begs for bodies colliding or furious headbanging.

“Taser” has some crunchy low end riffing, laying down a big groove which is augmented by the solid drums and thunderous bass. Hitting fast and hard, like a jolt of electricity from a taser (hence the song title), it incapacitates you with blunt force thrash trauma. Painting a vivid thrash metal picture of how a taser works and musically conveying it with intensity, it does a damn good job before it slows a little into the obligatory mood building riffs. Keeping that hard hitting thrash approach with fast music and just as fast vocal delivery, it really drives home the intensity and highlights just how tight a musical unit this often overlooked thrash force actually is. With catchy vocal hooks and fantastic imagery detailed in the vocals, it’s a great track and it keeps the power of the album going strong, capped off with a wonderfully intricate harmonized lead which rolls off the riffs with little fuss.

“Iron Maiden” isn’t a cover of the legendary song by Iron Maiden, but it does bear some hallmark sounds of the NWOBHM titans. With buzzing riffs and a dramatic build in the intro, it shifts into a fast paced riff dominated verse. Powerful and clear vocals over a steady, methodical groove lay the backdrop for a song about the brutal medieval and inquisition-era torture device known as the Iron Maiden: the casket of spikes which signalled the end for many a heretic. Much like its subject, the track pierces from all sides with the tightly delivered, melodic, hook-laden riffs laced with a classic 80s metal feel. Perfect for headbanging to, the tempo is fantastic and the chorus has some great gang vocal moments which beg for crowd participation. Some wonderful harmony lines bring that nostalgia home. Simplistic in structure and execution, it once again demonstrates the brilliance of this often overlooked band and makes you wonder why they never received the attention and fame they truly deserved.

With themes of the end, the pointlessness of life and death and destruction so far, it’s safe to say “Verge Of Tragedy” keeps the gloom up. With an intro hitting like a wall of sound, the rumbling bassline and heavy thrash gallop hammer away. The verse slows the pace down, dominated by the rhythm section and some little lead fills to add atmosphere. As it progresses, the rumbling riffs come crashing back with no awkwardness in the transition whatsoever. Big headbang-friendly grooves and dramatic vocals help keep the brutal lyrical themes resonating, and the exotic solos give it that extra edge. For an album so dark with its themes, it really has a bright energy to it, vocal and lead delivery matching the rhythm in the intensity they convey.

“Creeper” has an ominous feel from the off. A haunting sample goes into a hypnotic and tension building drum pattern, begging for crowds to clap along to. A thick bassline joins it, building the feel even more. When the guitars join in, mirroring the bassline in sporadic bursts to add that extra kick, it goes into a full-on hammering, precisely delivered chug rhythm full of groove and rawness. Infectious with its rhythmic hook, it compels you to move, and the cutting vocal delivery (detailing the birth of monstrous entities) traps you in its spell. It is a track of anthemic quality, having all the right components – groove, hooks, riffs and presence. Much like this album so far, it just begs to be played live.

‘LOTD’ keeps the darker edge but with a more classic metal approach. Big riffs with some pace are backed up with strong vocals. A strong cutting groove runs through the track and the way the rhythm section keeps it all locked in place is impressive. Weighted well and delivered with precision, the simple approach allows the wild thrash leads to work their magic with minimal fuss. Twisting riffs set up the dramatic mid section and  a sense of urgency builds as the vocal delivery and drums speed up, creating enormous atmosphere and setting up a false finish. As soon as it cuts, a twisting and heavy bassline rips through the silence followed by a wild and technical solo, demanding gratuitous amounts of headbanging action as it works its way across the fretboard.

“The Incantation” is a short instrumental filler with an ominous atmosphere to it. Haunting lead melodies over creepy clean arpeggios add some great dynamics and subtle backing effects tie it all together. Acting more as an extended introduction, it seamlessly transitions into “Monkey Wrench” which hits hard. Straight forward riffs hammer away with power and the vocal delivery is spot-on as always. Like a battering ram, it just crashes through what is in its way. Solid rhythmic foundation and the leadwork is delivered with flair, never seeming out of place in any way.

The same can be said about “Time To Go” (part of me wonders if the album had hit its peak earlier on and these last few tracks are just there to round it out). Packed full of hard hitting riffs and raw and powerful vocal deliveries, it is more of the same. Yes, thrash as a genre is hardly groundbreaking (as the general aim is to play riffs and stupidly wild/fast leads with lyrical themes about politics, war, death and other issues along those lines… but some variety is needed).

By the time we get through “Smoking Gun”, we hit the final and longest track of the album, “Forbidden Territories”. Rhythmically pounding drums and cutting leads with fierce distortion hit a peak before going into a driving bassline which slips into the powerful verse. As always, it is delivered with the ferocity you would associate with this kind of thrash metal assault. With scorn-soaked lyrics on apocalyptic themes (a staple of this album) complemented by hard hitting riffs and precisely delivered intricate leads, it basically ends the album how it started – hard hitting thrash metal.

On the whole, this is a great album from a great band who do deserve more recognition by the casual thrash fan. With this eponymous release, Flotsam & Jetsam have managed to bridge the gap between staying true to the sound they have always had, whilst incorporating a more melodic aspect to proceedings. Sure, it suffers from a bit of repetition in the later parts and at times it can be a challenge to get through, but when you sit there and actually listen to it, this is a good solid slice of classic thrash.

Previous Story:
Can You See Your House? The Atlas of Light Pollution

Next Story:
For Teenage Boys: The Proven Way to Double Your Female Friends