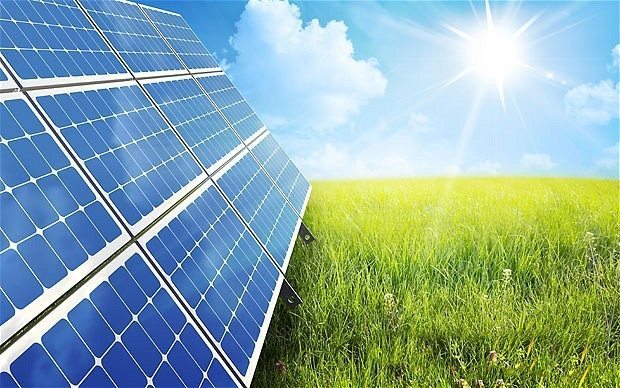 Take that creationists even science believes in science – AKA we can be tautological too.

The sun’s energy is virtually limitless, but harnessing its electricity with today’s single-crystal silicon solar cells is extremely expensive — 10 times pricier than coal, according to some estimates. Organic solar cells — polymer solar cells that use organic materials to absorb light and convert it into electricity — could be a solution, but current designs suffer because polymers have less-than-optimal electrical properties.

Researchers at Northwestern University have now developed a new design for organic solar cells that could lead to more efficient, less expensive solar power. Instead of attempting to increase efficiency by altering the thickness of the solar cell’s polymer layer — a tactic that has preciously garnered mixed results — the researchers sought to design the geometric pattern of the scattering layer to maximize the amount of time light remained trapped within the cell.

Using a mathematical search algorithm based on natural evolution, the researchers pinpointed a specific geometrical pattern that is optimal for capturing and holding light in thin-cell organic solar cells.

The resulting design exhibited a three-fold increase over the Yablonovitch Limit, a thermodynamic limit developed in the 1980s that statistically describes how long a photon can be trapped in a semiconductor.

A paper about the results, “Highly Efficient Light-Trapping Structure Design Inspired by Natural Evolution,” was published January 3 in Scientific Reports, a publication of Nature.

In the newly designed organic solar cell, light first enters a 100-nanometer-thick “scattering layer,” a geometrically-patterned dielectric layer designed to maximize the amount of light transmitted into the cell. The light is then transmitted to the active layer, where it is converted into electricity.

“We wanted to determine the geometry for the scattering layer that would give us optimal performance,” said Cheng Sun, assistant professor of mechanical engineering in Northwestern’s McCormick School of Engineering and Applied Science and co-author of the paper. “But with so many possibilities, it’s difficult to know where to start, so we looked to laws of natural selection to guide us.”

The researchers employed a genetic algorithm, a search process that mimics the process of natural evolution, explained Wei Chen, Wilson-Cook Professor in Engineering Design and professor of mechanical engineering at McCormick and co-investigator of the research.

“Due to the highly nonlinear and irregular behavior of the system, you must use an intelligent approach to find the optimal solution,” Chen said. “Our approach is based on the biologically evolutionary process of survival of the fittest.”

The researchers began with dozens of random design elements, then “mated” and analyzed their offspring to determine their particular light-trapping performance. This process was carried out over more than 20 generations and also accounted for evolutionary principles of crossover and genetic mutation.

The resulting pattern will be fabricated with partners at Argonne National Laboratory.