Entering the arena is easy, but it takes killer death moves to get out alive. Can Warbeast provide?

No matter how much variety death metal can offer, the crushing heaviness of Doom, the hazy riffs of Stoner rock/metal and of course, the anthemic qualities of heavy metal and hard rock, Thrash is King.

Thus, when a new thrash band surfaces (or a thrash act suddenly appears on my radar) I do take time to give them a listen. Be it Teutonic sounding, Bay Area-inspired, old school, modern, bordering on the edges of speed metal, death metal or sometimes even venturing into the grind and prog realms, thrash is something which gets excites.

Warbeast are one of these bands who have surfaced before. A couple of years back, everyone’s favourite wine-worshipper Phil Anselmo (vocalist and Arsehole-of-the-highest-order in Down and formerly of Pantera) released an E.P split with Warbeast featured on it. It was typical of the Phil Anselmo style; bordering on hardcore and groove, plenty of kick and attitude. The kind of music which has that ability to make you feel like you just want to let loose, screw the consequences and lash out at everything around you.

It was all very reminiscent of Pantera’s greatest non-Glam album (FTR, Power Metal is their best album!). Fast forward a few years, the Warbeast appear again and curiousity naturally leads us back to them.

Enter The Arena is a 10 track onslaught of heavy hitting riffs and musical aggression which is highly condensed and focused into just under 55 minutes. For an overall view of the release, you could basically (and possibly crudely) sumarise it as the bastard lovechild of Pantera and Hatebreed. It is loud, angry, heavy and packs a punch in all departments.

Whilst that may be a good thing for some, it is also a problem for this release, as it is rather predictable and repetitive, leading to a rather over familiar feel as you listen to it.

Opening with a 7 minute sucker punch of a track in the form of “Centuries Of Poisoned Soil” it lays out the foundation of the release and gives you a blueprint for what to expect in the subsequent tracks. Whilst it is frantic and hard hitting thanks to its pummeling drums and harshly growled vocals, it just feels like a perpetual loop, repeating similar patterns for its duration. Admittedly, some of those crushing groove sections are rather enjoyable, it just gets dull.

There are aspects of other bands in the sound which do provide a touch of variety, but not enough to really engage interest fully. “Punishment For Gluttony” has touches of Slayer in there, “Orchestration Of Violence” has some familiarity to metalcore giants Lamb Of God and “Hitchhiker” takes a page out of the Pantera lead guitar playbook with its wailing solos. 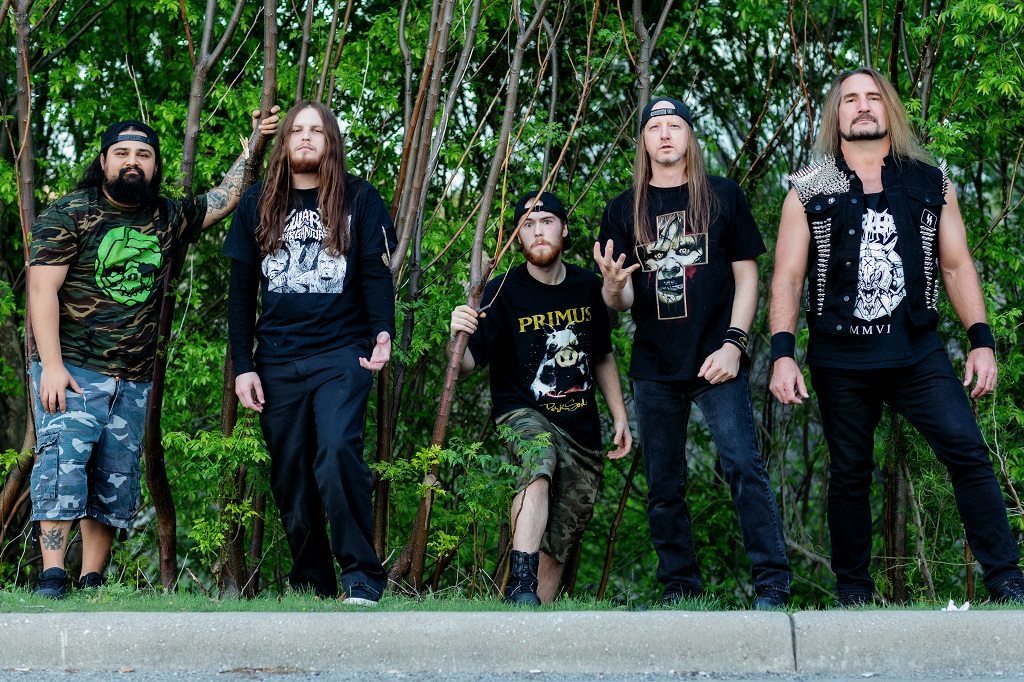 Other than that, its pretty much the following formula: heavy riffs, shifting pace, steady groove/chaotic groove, angry vocals, intensity dialed up to 11.

This release is more of a casual/occasional track listen as opposed to something to listen to in one sitting. Individually, the tracks are good and one would imagine that in a live setting, they would go down brilliantly, igniting the floor and creating a sea of bodies smashing into each other. Some tracks would seem right at home at a metal club also, but other than that, this isn’t a strong release when looked at as a whole.

Enter The Arena may be adrenaline pumping, fight for your life styled thrash with plenty of attitude, but it would only hold its ground at points rather than on a whole. If it were in gladiatorial combat, the emperor might take some time to either give it the thumbs up, or condemn it to its fate.