The hero of radical Italian art in who painting is reinvigorated as the premier medium encompassing all others.

[dropcap style=”font-size:100px;color:#992211;”]W[/dropcap]ith a career defined by anti fascist principles and experimental abstraction Emilio Vedova should be as well known as Rothko and Pollock, but strangely despite success in America and his native Italy its still the Americans that dominate the pages of art history books. Vedova’s raw, visceral and highly accomplished works pushed painting into new territory and dominated the spaces they inhabited with their scale and energy. His legacy is well known to those who have an interest in abstract painting but his approach is so relevant that this deserves more penetration into the mainstream. 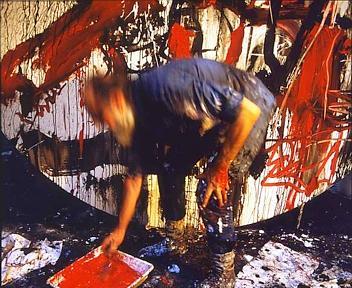 Vedova working in the 1980s

Vedova’s style and approach is highly energetic large scale expressive painting which bridges the divide between: painting, sculpture, performance and architecture. The works not only fill spaces but redefine them. The paintings could be shown in the traditional white cube or the studio space, or in a less refined space and still maintain their aura as artworks.

“The space becomes a roof to keep the

rain out which is increasingly rare in

and pristine spaces that house artworks,”

The internal logic of each separate work is so layered and has such a high impact that they fight attention away from the theatricality or formality of the surroundings. This is greatly enhanced when works are shown together. The space becomes a roof to keep the rain out which is increasingly rare in the expensive architectural projects and pristine spaces that house artworks. Too often the space is the star, not so when it contains Vedova’s artworks. 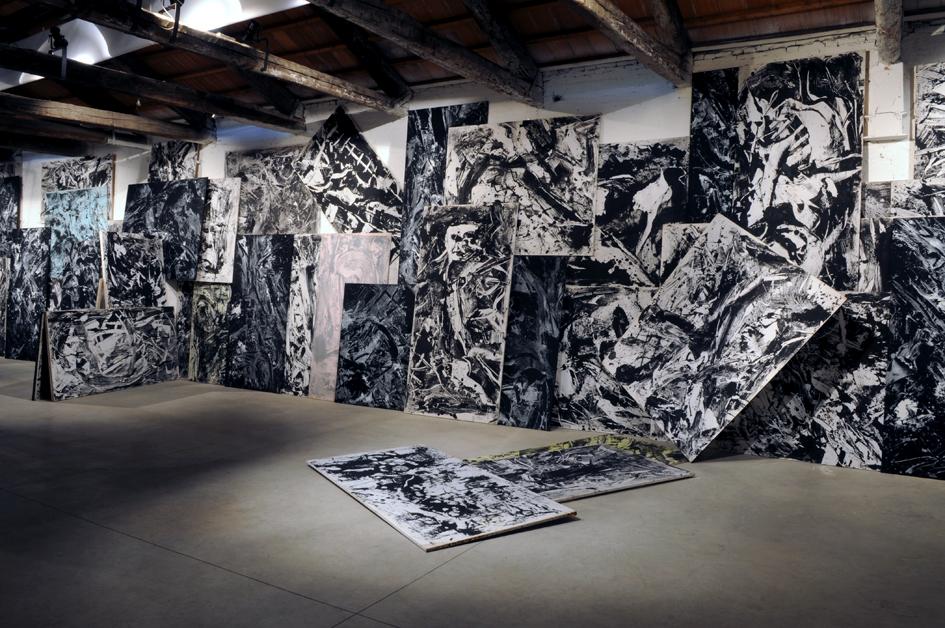 What sets Vedova apart is his experimentation and pushing of the limits of painting while retaining painterly qualities; this has the effect of greatly upgrading the relevance of the artist and questioning the disciplines whose territory he pushes into: Architecture is too formal and the needs to be challenged or humanised by Vedova’s emotionally layered and clearly laboured works which evidence his physical activity and the performative nature of creation, Painting needs to be able to compete with other media by translating its qualities across disciplines and breaking its own historical rules (without the drain of ironic posturing) 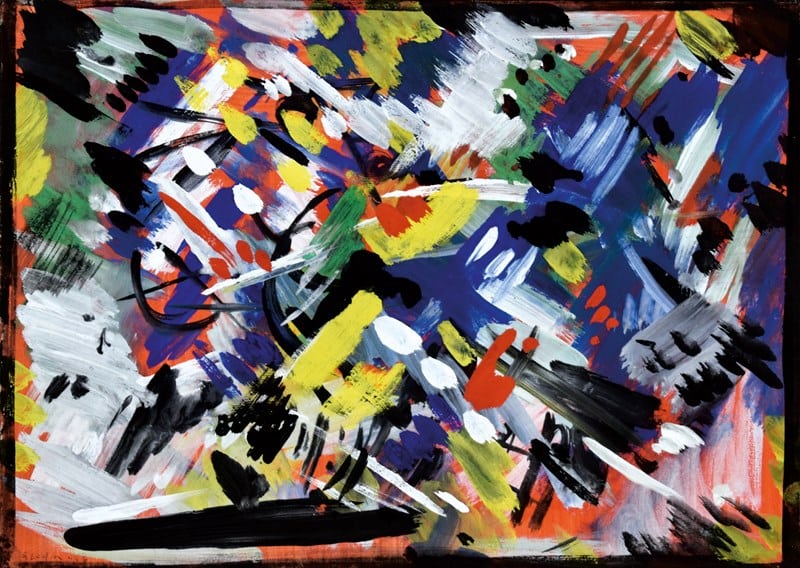 In short a complete artist has emotional content and a avant-garde or experimental thrust to their work. You never get the impression that Vedova is trying to stabilise an approach but he does direct his energy and control his gestures and colour choices; moving from intense colour (as above) and monochrome to more naturalistic colours. 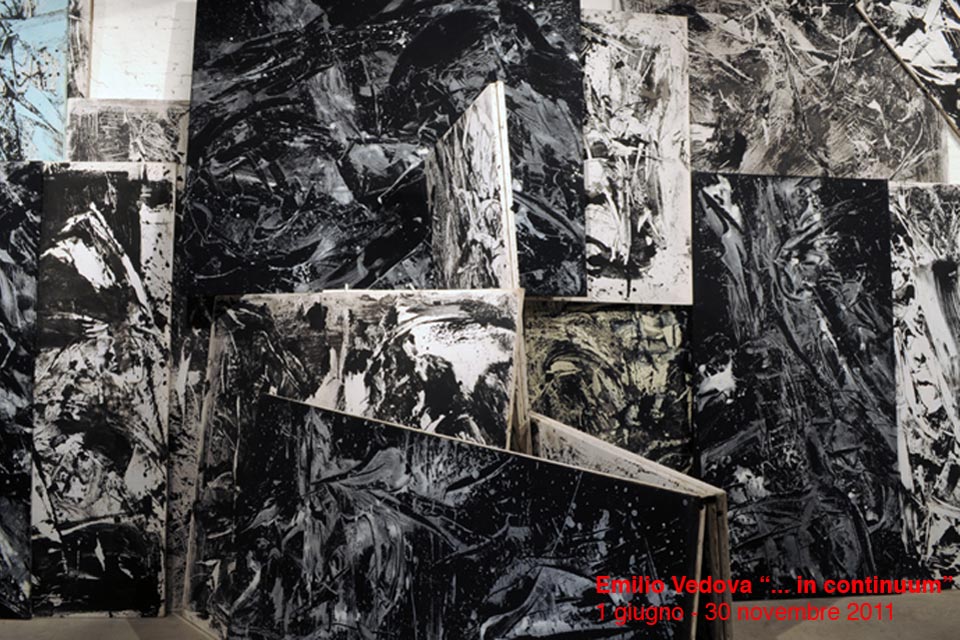 The paintings become like walls and pathways jutting into the space

The separation of painting and sculpture is also blurred as physicality is emphasised through the installation of many works informally placed in space, and with the introduction of painted objects. This gives a modular feel to work which can be seen in various combinations from various angles or, in the round. 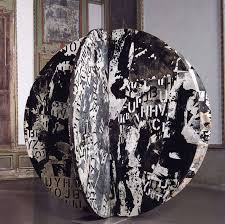 “…he remained to the end a left-wing icon,

the bearded, bespectacled hero of radical 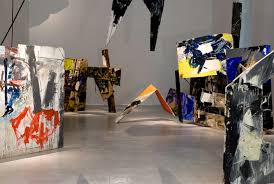 Born in Venice (1919) Vedova is an influential abstract artist whose career stretched from Fascist Italy to the early 2000s when he died 2006. Vedova himself an anti-fascist was involved with the Italian resistance movement (1944 to 1945 and in 1946, he was one of the co-signers of the Beyond Guernica manifesto in Milan) and would later reject the formalism of other abstract styles possibly influenced by the support Marinetti and futurism had given to Mussolini and recognizing in it a tendency to conformity. 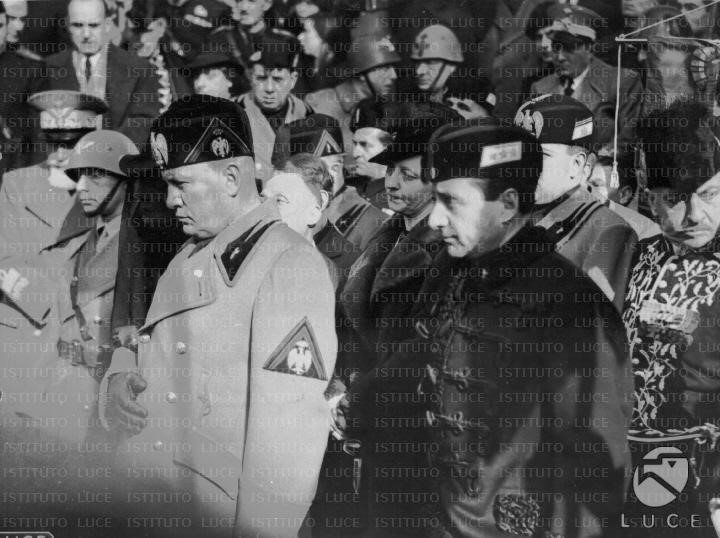 Mussolini (foreground left) and Marinetti (far right) participate in a crowd of personalities at the funeral of D’Annunzio in 1937.

“Not until 1942 was an exhibition — of young partisan Emilio Vedova — closed: censorship was barely needed, so smartly did fascism co-opt and neutralise artists into the propagandist swell,” Jackie Wullschlager, 2018

Vedova had created work very much in the vain of the futurists which was more formal in that it obeyed certain stylistic rules. Vedova’s work below is an example of this tendency; the dynamism and action across the picture plane has an equivalence, as if everything is happening at once. This would be replaced by the more layered and spontaneous approach discussed above. 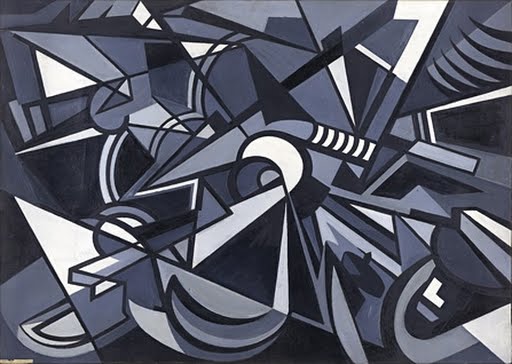 Vedova’s flatter more controlled style is successful, but the aesthetic was very much claimed for Futurism and Vorticism (both right leaning politically which Vedova had opposed during the war) ‘The Impact’ is planned and executed where as the later works are made and revised until there finished, that difference in process is essential to understand.

The artist working with spontaneity is not wildly expressing themselves as opposed to the order and control of the planned image that would be a very naïve way to understand the different approach and the philosophical switch required. In the later works Vedova is more present, more contingent, actions are carried out and editing is required in the immediate aftermath the moment or gesture. The difference, is that between the realisation of a vision and the exploration of a process.

After the war this conflict became known as the ‘battle of styles’ and was continued into the 50s where old friends opposed each other about the direction of progressive painting,

“Like many fierce quarrels, this dispute was conducted between former friends, in this case the leftwing intellectuals who had taken part in the Italian resistance during the second world war. Some of them believed that socialist painters should follow the example of Picasso’s Guernica and create overtly political, figurative images, preferably on a grand scale; others, including Vedova, argued that revolutionary art had, by its very nature, to be abstract,” Christopher Masters 2006 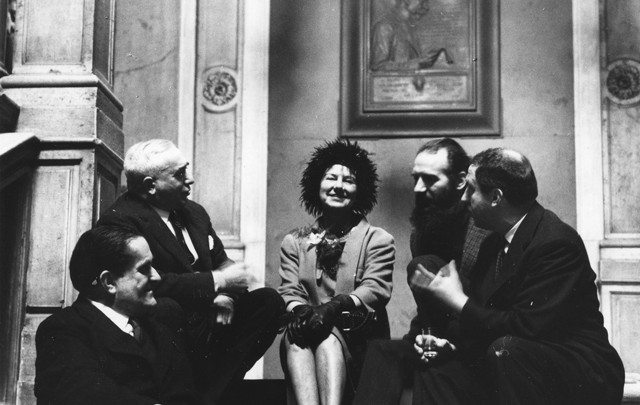 Peggy Guggenheim with Vedova in 1962.

Vedova had a successful presence in America showing work and teaching. His career was aided by the support of Peggy Guggenhiem who recognised his ability and bought key works for her collection. Vedova had an ongoing interest in our perception and apprehension of time, the work below on that theme was one which attracted Guggenhiem’s attention,

“The young Vedova was the first artist, together with Giuseppe Santomaso, to meet Peggy Guggenheim upon her arrival in Venice in 1946. She rightfully saw in him a rising star of the European avant-garde. Two works acquired by her in the 1950s remain in the collection: Image of Time/Barrier (1958) and Hostage City (1954)…” www.guggenheim 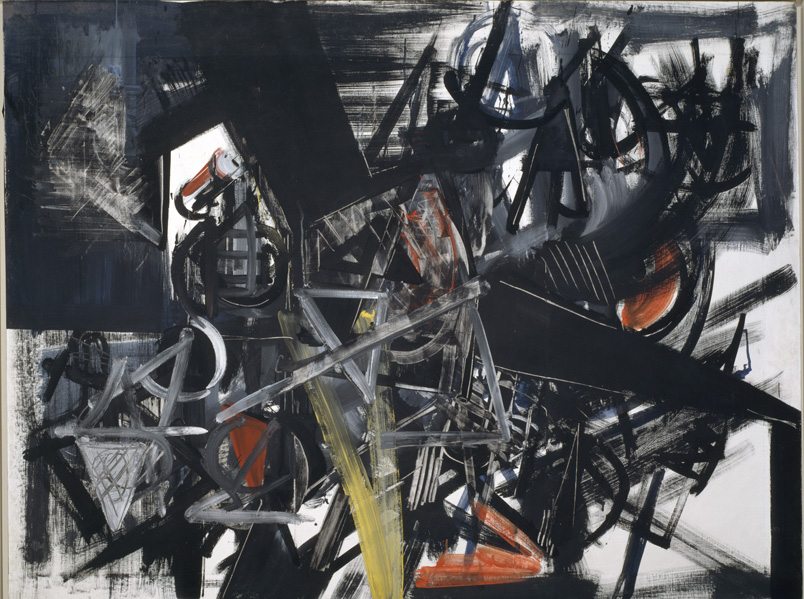 This conflict of styles has never really been resolved although it has been side-lined by the sensationalism which has for the most part, replaced political or philosophical content as the primary attraction to the public. The idea of how best to further progressive ideas through art, form or abstraction may never be resolved; it may be a necessary problem, what’s interesting is the way that Vedova’s works are so plentiful and his spirit is so bold that when he is allowed to he is able to use them to draw into the whole space encompassing it into his statement.

Previous Story:
Only The Support: How To Steal The Show

Next Story:
All the World’s a Stage: Ian McKellen Plays His Part