Beautiful but burpy: Sydney Harbour’s toxic emissions are equivalent to 200 cars on the roads

[dropcap style=”font-size:100px; color:#992211;”]I[/dropcap]
t’s blue, salty, shimmers in the New South Wales sun and is uncontested as one of the world’s finest natural harbours.

However, Sydney Harbour is an environmental miscreant, collecting the dubious contents of numerous outfalls and rivers, bubbling their component parts together in an elemental cauldron, and spewing out toxic compounds as noxious as the exhausts of two hundred cars.

The Sydney Harbour is renowned as a beautiful landmark straddling the thriving city but a new study has shown it is also a source of significant carbon emissions, which requires careful management as the city is poised to double its population by the end of the century.

That is the message of new research that has quantified CO2 emissions from the Harbour for the first time – found to be 1000 tonnes annually – equivalent to the pollution from about 200 cars.

The research, by the University of Sydney’s Marine Studies Institute and the Centre for Coastal Biogeochemistry at Southern Cross University, is the first long term study of such a large and important Southern Hemisphere system referred to as a drowned river valley, which in Sydney spans estuaries from Middle Harbour to Lane Cove and Parramatta.

The emissions from Sydney Harbour – including from urban runoff, leaf litter, soil decomposition and sewage overflow – were found to be very low compared to the highly polluted estuaries of Europe and Asia, which can emit up to 76,500 car CO2 equivalents each year.

Sydney’s emissions were found to be significantly less than China’s major dammed river, the Yangtze, which is adjacent to megacities including Shanghai. Sydney’s emissions measured at a similar, albeit lower level, to other natural drowned river valleys in the United States such as the Hudson River, which flows through New York.

Sydney is also predicted to become a megacity – with a population of 10 million – by 2100.

Lead author and PhD candidate Edwina Tanner in the University of Sydney’s School of Geosciences, said although the Sydney Harbour was a net carbon emitter, during periods of high rainfall it became a carbon 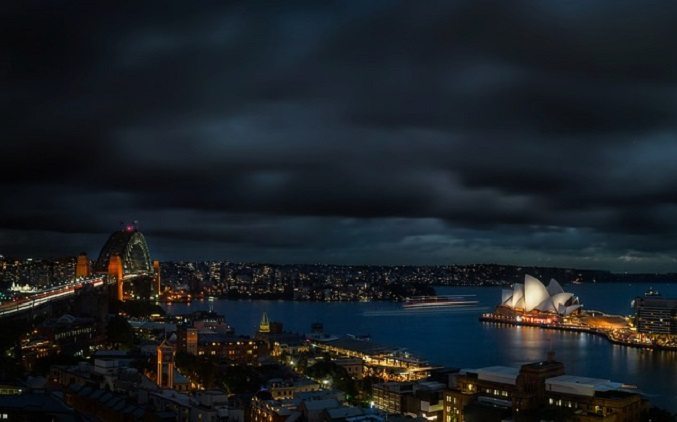 “The 1000 tonnes of CO2 we found are emitted from Sydney Harbour each year is significant – but it’s a small amount for an estuary of that size,” said Ms Tanner, who will receive her PhD this year and is the Sydney Institute of Marine Science project manager of the World Harbour Project.

The distinctive funnel shape of the Sydney Harbour Estuary drowned river valley system includes narrow upper estuary channels, where particulate matter is filtered, which link up to a wide lower estuary that is flushed with coastal waters.

Ms Tanner said monitoring of estuarine CO2 was important for planning and remediation efforts: “As each estuary is different, the potential impacts of climate change and urban development will be different in every ecosystem.”

Co-author and supervisor Professor Bradley Eyre from Southern Cross University, who has been studying estuaries for more than 20 years, said the research should play an important role in quantifying the significant carbon footprint of estuaries in built-up areas worldwide.

“Comparing results with other global estuaries, the discharge per unit area of the Sydney Harbour provides a predictor of emissions for estuaries from a similar geomorphic class,” he said.

“A detailed analysis of emissions from urban harbours around the world could provide an understanding of adaptation strategies needed to manage and protect estuaries globally from future development and climate change.”

Previous Story:
An Attempt at a Productive Conversation with a Conservative: A Fantasy Saga