The trains in New York never run as advertised.

They don’t even pretend to stick to any kind of schedule. On this day the E train was running on the A tracks but making local F stops. It’s tourist season in The City and foreigners were scratching their heads. A German lady with a sun visor and a fanny pack asked me about the trains.

“I have no idea,” I said. “I’ve lived here for years and I never know where the train is bringing me.”

I had about two hours to kill before the NOFX signing. I took an uptown train and got out at the north end of Central Park. No one ever visits the top of Central Park. It’s probably the last hidden gem of the whole city. The North Woods portion of the park is a deep forest, full of wildlife and slow moving brooks. The noise of the city disappears almost instantly, and even though you’re right in the middle of all the madness, you might as well be in Montana. I was on the lookout for migratory birds on their way back to Canada. I think it was too early in the season though, the only bird I saw of any note was an Oriel.

I was running low on time and it started raining so I took a train back downtown to Union Square. When I climbed above ground I got a text from my girlfriend: don’t forget we have an 8:30 dinner at Indochine.

I was already on almost thirty hours of no sleep and pretty stupid from the Xanax. The last thing I wanted was to make my poor girlfriend deal with my condition. But dinners at Indochine don’t come easy.

The restaurant was a New York icon in the 80s. It was one of Warhol’s favorites. Madonna hung out there. Every socialite passed through it’s doors. And unlike everything else that was once cool, Indochine never lost it’s flavour. The waitresses were all six-foot supermodels with Russian accents. There was almost never an open table. My girlfriend got the reservation because she’s a concierge at the most infamous hotel in Manhattan.

The line outside of Strand was about one hundred people deep when I arrived. A Strand employee asked my name. I gave it to him and he said, “Your wife was looking for you”.

He didn’t believe me. He repeated my last name to another employee.

“Yes”, he said. “A girl named Georgia said ‘when Laudati gets here tell him his wife is looking for him’.”
We both stared at each other.
“Do me a favor?” I asked. “Don’t tell her I’m here.”

He wrapped a wrist band around my arm and continued down the line. I was definitely curious but I’ve never met anyone named Georgia. Everything was becoming confusing so I decided to leave it alone.

I could only see two girls on the whole line. One in the front and the other right behind me. They were both too pretty for a line full of ugly men. And oddly, they both had the same blue hair.

Fat Mike (wearing a skirt) and Melvin suddenly stomped down the sidewalk. As they walked into Strand, Melvin yelled, “I am Eric Melvin!”

It was exciting for ten seconds, but then nothing happened. The line moved at a slow trickle for forty-five minutes. We were looping around the main entrance of Strand into the side door. On normal days this is where you enter to sell your used books.

There was a group of punk rockers from Queens in front of me. I heard one of the guys talking about the new Ramones exhibit that had just opened at the Queens Museum. He said Pearl Jam had been there for the opening ceremony. What a dumb band to have introduce The Ramones, I thought. He also said, “Simon and Garfunkel, the Ramones, and Run DMC, all went to the same high school.”

Two young guys wearing Make America Great Again hats walked by the line. They were both in expensive suits. One of the guys had a cellphone in each hand. The other said to him, loudly, “When are they going to stop letting white trash like this into our city.”

I thought about when I was young and the only thing my friends and I wanted to be were rockstars. Our biggest argument was whether Green Day or NOFX was the better band (time has made this obvious). But these Trump goons were almost my age, and it was clear they had never been kids. I always assumed that Fat Mike and Billie Joe Armstrong were everyone’s heroes, but the Patrick Bateman’s of the world skip all that. Rich guys are their rockstars. And here our two worlds collided, on this corner, where someday the poor and the artists would be barred from blocking their path.

It was getting close to my turn to walk into Strand. I was suddenly hit with massive anxiety. What the hell am I going to say?, I thought. NOFX is my favorite band. I had brought a copy of my book to give them, but I didn’t know if that was lame, so I left it on the train. Other than that I hadn’t thought about our interaction. I tried to think of something that would make them laugh, but even on a full night’s sleep no one thinks I’m funny. 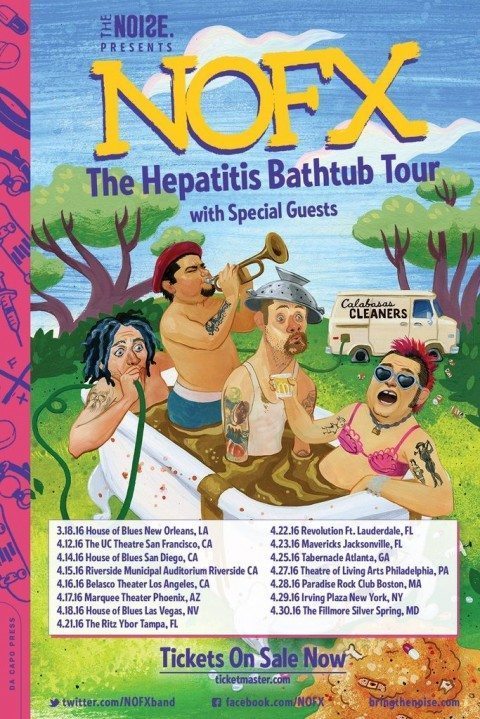 Then it was my turn. I walked in and all four band members were sitting on a counter. There was a rope behind us that created a sort of conveyor belt. A book was sent down the line of NOFX guys and they signed them as weird fans yelled weird questions. The blue-haired girl from behind me somehow ended up in front of me. Fat Mike singled her out right away. Nice play, I thought.

Fat Mike looked up at someone’s shirt and said “Hey, I love that band.”

I couldn’t see what band it was. They had a few words about someone being gay. Then Fat Mike said to him, “You should see my asshole. My wife spreads it wide open and shoves huge shit in it.”

I kind of stumbled down the line and said “hi” to Melvin. He gave me a huge smile and said, “thanks dude!”. El Hefe and Smelly both gave a wave and said thanks as I walked by. Someone from Strand handed me a book at the end of the line. And then it was over. That was almost too efficient, I thought.

“What’s that?” He pointed at my book.
“It’s called The Hepatitis Bathtub.”

Trump was on the TV giving a speech. The old guy pointed at the screen.

“That’s what I’m talking about”, he said. “Trump’s the guy to get things done.”

I read about thirty pages before my girlfriend showed up. It was full of all the nasty shit I was hoping for. A whole expose on the lives of the men I’d looked up to for almost twenty years. If you’ve never been on tour you have a really romantic idea of the road. Unless you’re Maroon 5, tour is a pretty rotten experience. It’s a few filthy dudes in a tiny compartment who don’t sleep for months at a time. But it’s also the best adventure you’ll ever have. The NOFX book was capturing this perfectly.

My girlfriend is from Massachusetts so she had never seen St. Mark’s Street before it was whitewashed. I took her outside to show her Trash & Vaudeville but it was vacant.

“This store is the best”, I said. “Neighborhood people take shits on each other and they hang the pictures up around the store.”

My girlfriend looked a little disturbed. The front window of Search & Destroy has disfigured baby dolls stacked on top of each other. It looks like the mass grave of a genocide.

“This is definitely your scene”, she said.
“There’s all this weird Hitler memorabilia,” I said. “It’s a freak show.”

We went inside. All the Nazi shit was gone. So were the shit fetish photographs. I looked at the price tags on their clothes. A denim jacket was $400.

My girlfriend was doing her best to look enthused. But she was right, even Search & Destroy had been sanitized. We were going to do a loop around the store but there were so many Chinese tourists we couldn’t even move. How long will it be before they gut this place and put in a Dunkin’ Donuts?, I wondered. 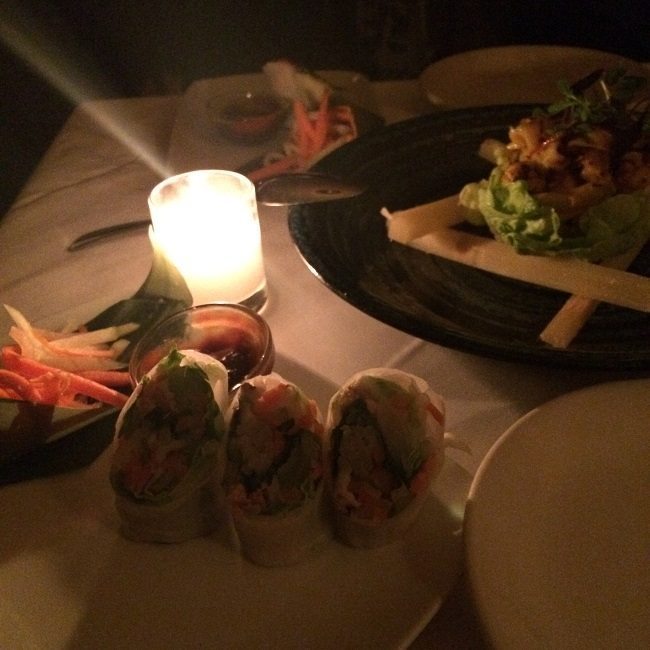 We headed back up St. Mark’s towards Indochine. It was a new New York and everything cool was dead. But the world keeps moving and at least on this night, it was pretty nice be able to walk hand in hand with my girlfriend down streets that not so far in the past would’ve been too dangerous to find any romance on. Even with the soul extinct the heart keeps beating.

At Indochine we ate $300 worth of vegetarian food served to us by a Russian model who liked like a James Bond villain. My girlfriend went to the bathroom and the guy sitting next to me asked if she was my girlfriend or my sister.
I don’t care where you’re from, a question like that only means one thing.

Indochine comped our meal and on the way out we passed Nas eating with a hip guy in sunglasses. We went back to my girlfriends apartment in Harlem and didn’t say much. I collapsed onto her bed and read about NOFX and punk rock while fire engines and ambulances and car horns drifted through the open windows.

Then I slept for two days and didn’t miss a thing.

About Scott Laudati 31 Articles
Scott Laudati lives in New York with his Boxer, Satine. His collection of poems "Hawaiian Shirts in the Electric Chair" has been published by Kuboa Press. Visit www.ScottLaudati.com for less professionalism and angrier essays.