CONCEPTION: An exhibition to create dialogue and duplicity 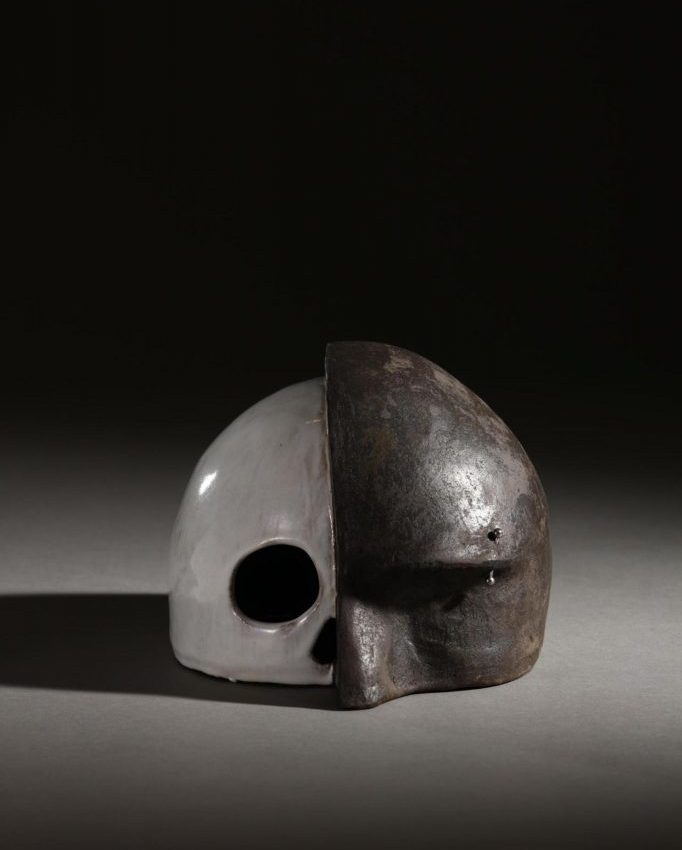 In this two-part exhibition spanning London and Belfast, the vibrant, acid coloured figurative canvases of Darren MacPherson are hung alongside Patrick Colhoun’s dark, brooding, somewhat disturbing contemporary sculpture. These two exciting artists come together in a mind-tingling combination which will really make your brain tick. I was lucky enough to catch up with them both to find out about the inspiration and impetus behind this new body of work. 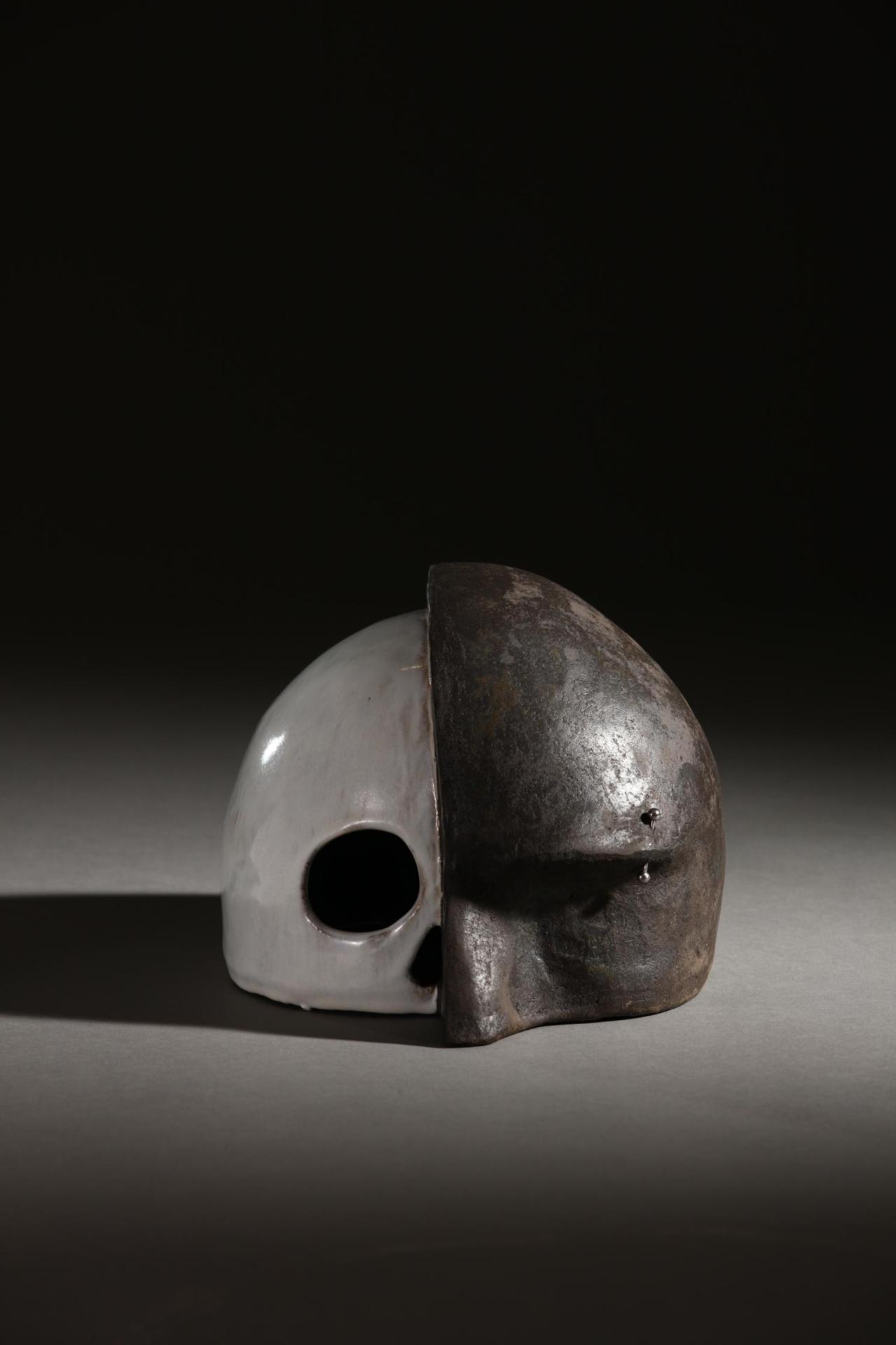 You can catch part one at the Stringer Gallery next week, and Trebuchet readers are invited to join the artists on the 7th for the Private view. Read on for a sneak preview. 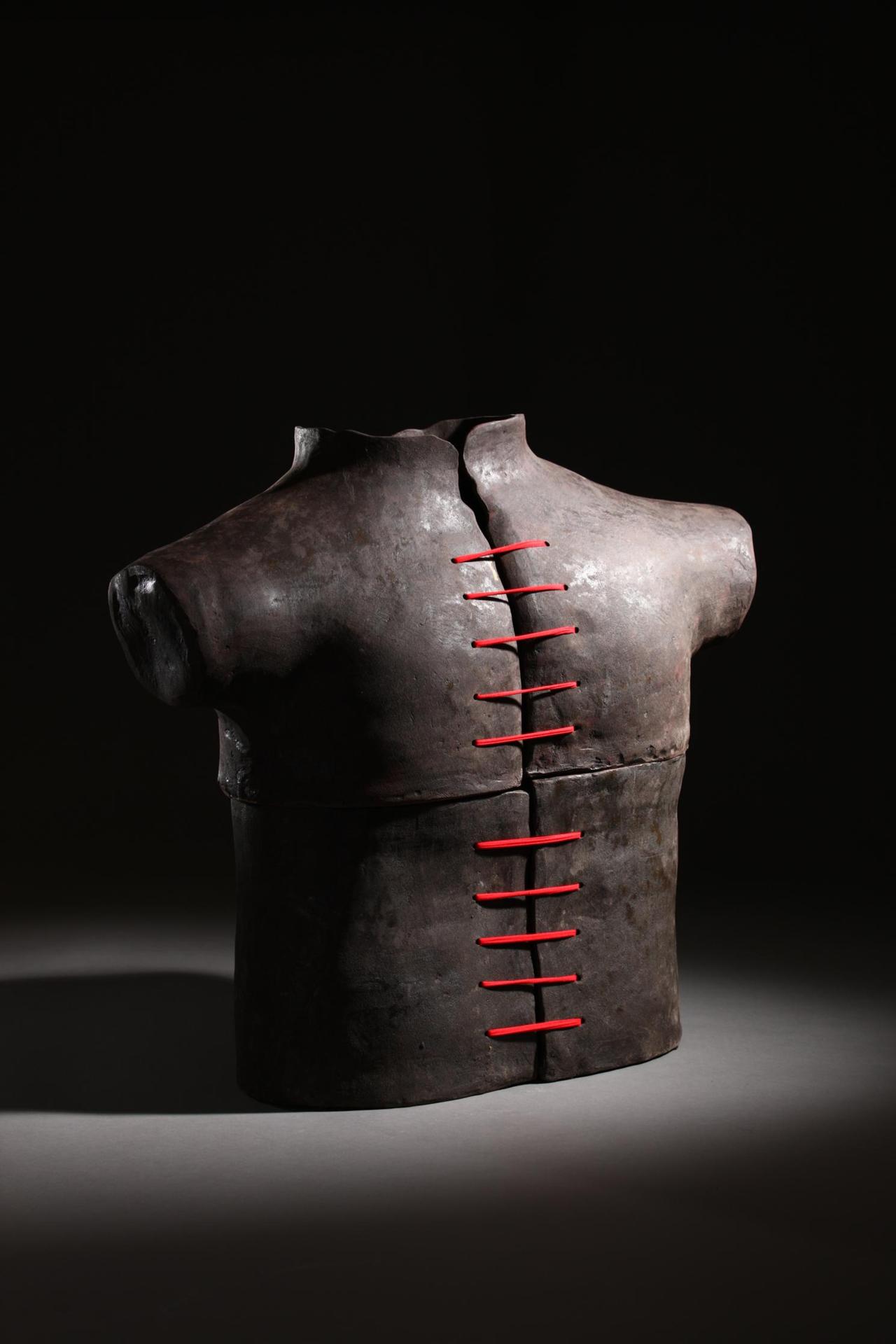 The space is a fresh, new contemporary space housed within a working factory in North Greenwich – an industrial setting that compliments both styles. Darren MacPherson is a contemporary figurative artist whose acrylic and spray paint works are bold and full of colour. The negative space in the composition is used merely to emphasise the foreground. This is the part of his work that he spends most time on, he tells me, adding layer upon layer of content. Darren’s colours bounce off the canvas and his chaotic, sometimes erratic, strokes make for abstract suggestions of the male and female form. 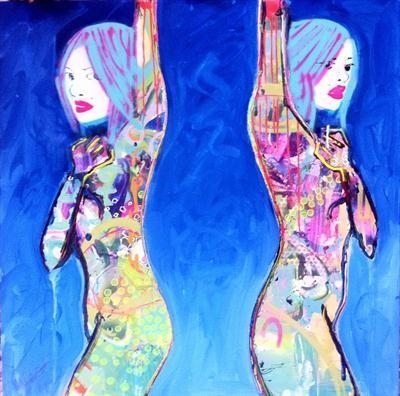 In contrast to Macpherson’s bright paintings bursting forth from their canvases, contemporary sculptor Patrick Colhoun has an irreverent approach and ever darker subject matters. This makes for work that has a magnetism and simplicity of form that draws you in to his tactile and deep surfaces. Using ceramics in a very untraditional manner, his skull-like forms are adorned with spikes, whilst other organic shapes possess sinister but luscious surfaces.

Colhoun’s use of unusual materials such as latex, hosiery and piercings add to the mix. He says "I strive to be unique, my work will divide opinion. It is strong and masculine, certain pieces animal-like. It touches on subjects like sexual deviancy, containment, aggression, with hints of religious symbolism, making distasteful subjects into attractive physical forms."

To delve a little deeper, I put a couple of questions to the artists:

Nicola Anthony: What's your favourite or most challenging piece you've created for in the show?

Darren Macpherson: My most challenging piece has been 'An Inconsequential Truth'. I wanted to create a large work as a centrepiece for the show and this one is almost 3m wide. In line
with my experimental nature I decided to reverse my painting process and block in the figures using a very wet painting technique, the image was inspired by great historical painters such as Caravaggio, who used incredible contrast in their paintings. However I have updated the imagery to offer a more contemporary feel, both in content and style. 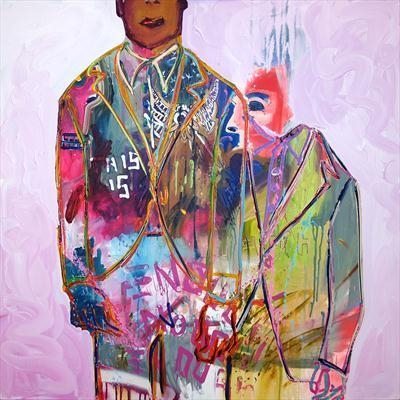 Patrick Colhoun: The two are very different. My most challenging piece has to be Nylon, where I have made a finished piece out of four individual pieces. The desire to scale my work up has been huge for a long time and I have done this using multiple pieces as installation work and also by binding pieces together to make a bigger whole. This has been challenging but ultimately very aesthetically strong. My favourite piece has to be 'The Gimpettes' which I am told are quite cute, which goes against my general themes, but the idea of introducing a material such as coloured latex layered over a miniature ceramic gimp mask adds a degree of amusement to the piece. 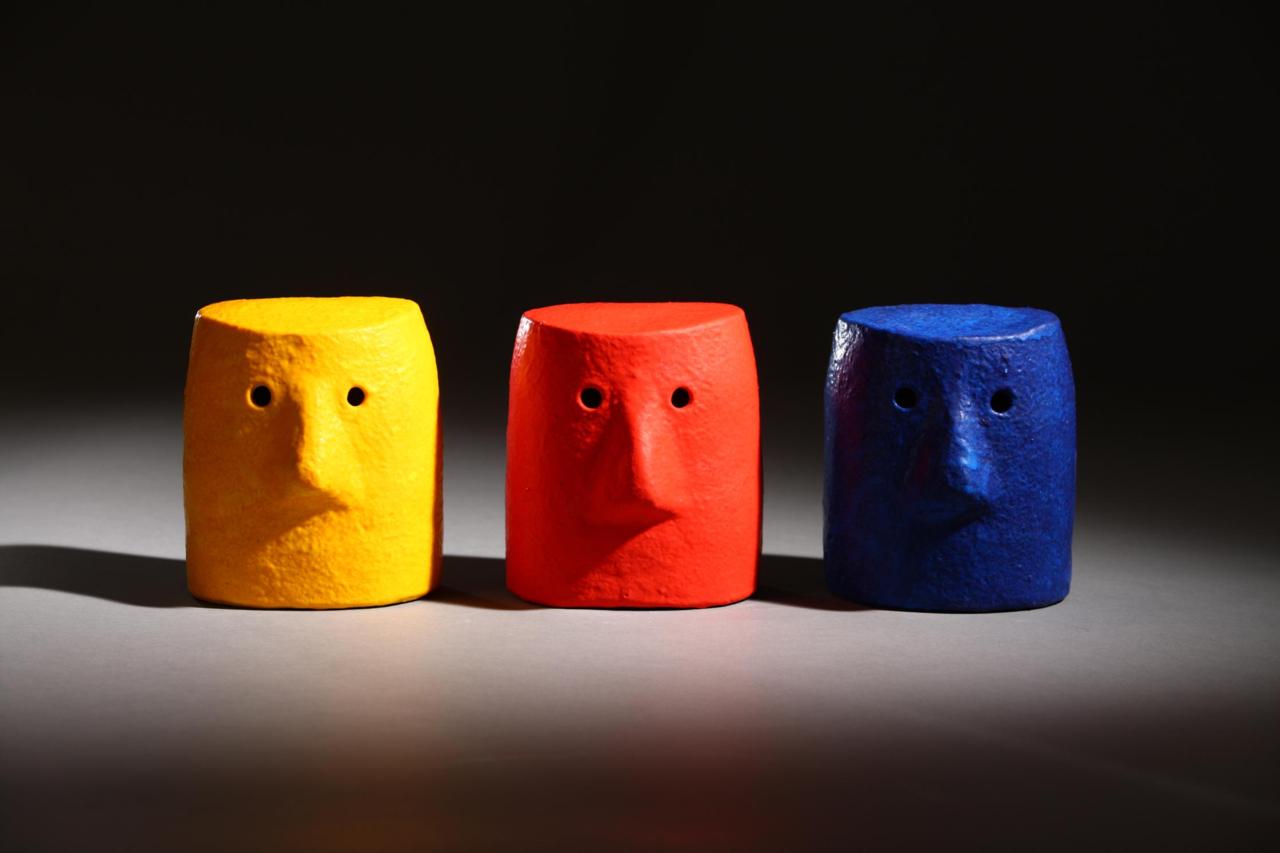 NA: Tell us about the idea behind the show – did you work together on a theme or pick pieces to curate with?

DM: When we first started talking about doing a joint show, we had the notion of beginnings, growth and development both as individuals and artists. We felt the term 'Conception' encapsulated those ideas and we worked from that point. The Stringer Gallery is also a brand new space set within a working factory and this fitted neatly within the outline of the 'Conception' theme. We felt that although our work could be considered very different, there was some balance and symmetry when the work is brought together in the same way that apparently contrary elements can be interconnected and interdependent within the natural world.

a brand new space set within a working factory

PC: The initial idea was for a two person, two part show, the first show was to be in Darren’s home city, and the second show in my home city, Belfast. The two part thing became a bit of a hook. The name Conception came from the fact that there is a tremendous symmetry in Darren’s and my own lives in terms time of life, family setup and previous career, but one of the most important elements we thought was that neither of us had any formal art training, and so we were both starting out on this new stage of life in terms of art, hence Conception.

We have deliberately not collaborated on individual pieces or shown too much work to each other because I feel that the original gut feeling that the work will work together is there, and that to curate the pieces on the day adds to the overall excitement of the project. 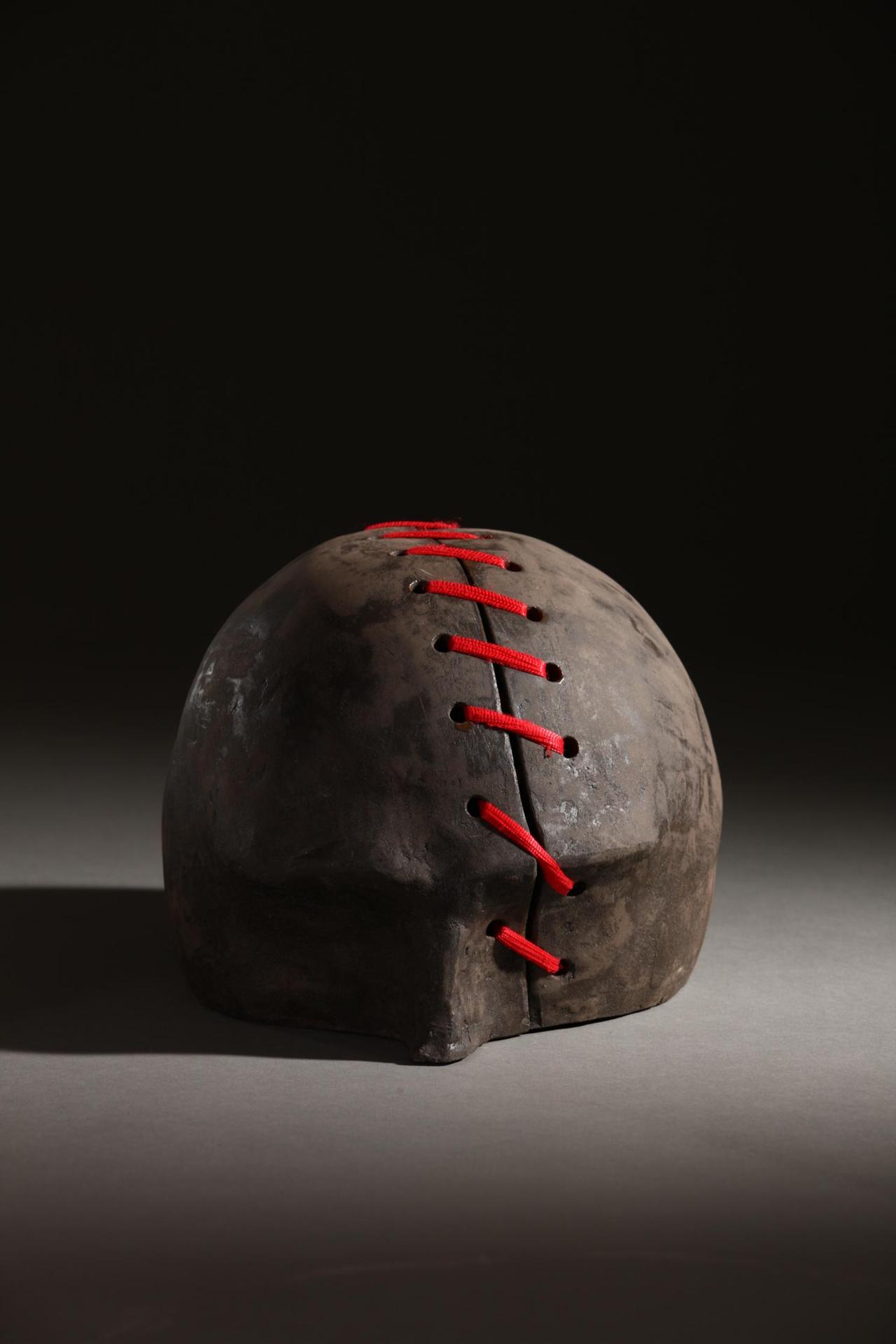 Trebuchet readers are invited to join the artists for the opening night on 7th June. RSVP here

Images: Courtesy of the artists.
Nicola Anthony is an artist and art writer living & working in London. She seeks to discover things which make her mind crackle with creative thought. Catch @Nicola_Anthony on twitter, or her artist’s website

Previous Story:
A glass of wine and a Gauloise: European teens smoke and drink more than Americans
Next Story:
Tropic of Cancer: Permissions of Love