[dropcap style=”font-size:100px; color:#992211;”]I[/dropcap]t’s a hell of an evening to get into Manchester, with the M60 near-stationary and packed with melancholy singles and irascible lovers alike – with most of the latter in the midst of telephone domestics, time-sensitive dinner plans in tatters.

Roadworks around every corner seem to be responsible for the breakdown of a good many relationships this Valentine’s day, but at least the Department for Transport have gone some way towards panic-using their remaining budget at the end of the tax year. After taking over two hours to travel 14 miles, it’s definitely time to let some fucking steam off.

On arrival I have a lovely chat with Deez Nuts’ JJ Peters, then it’s a scabby burger from the closest takeaway and into Sound Control’s upstairs room – squeezing past a full-on merch emporium stuffed with all the black hxc long-sleeves you’ll ever need. The venue’s around about the half-full mark at this point, with plenty of recognisable faces from other shows/Rawkus events. There are even a few awkward looking dates going on, and one of those guys who shows up to a hardcore show in a suit (whom I shall henceforth nickname ‘Manc Carter’). 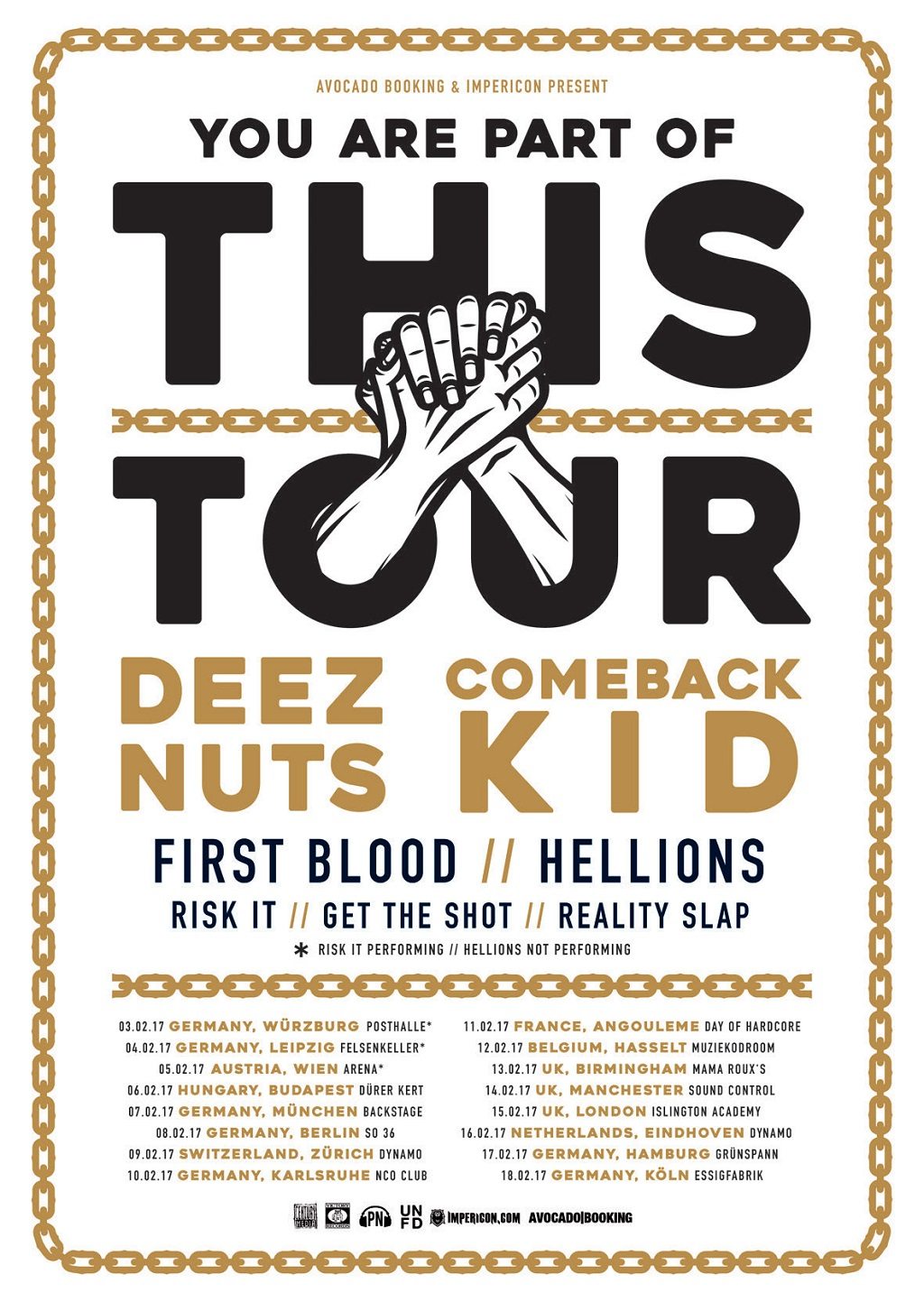 First Blood are smashing out a fairly generic, yet well executed, metal-tinged hardcore set composed of down-tuned low riffs and roared vocals from frontman Carl (who you might recognise as the former Terror bass-man if you caught a show in the mid-noughties). There’s a generally decent reception and a bit of movement, the Californians coaxing a couple of circle pits and two-stepping out of the crowd to warm up a chilly winter evening. Undeniably heavy stuff and a definite product of the scene the band hail from – you definitely get a sense of bands like Terror channelled in their grooves and raw performance. Decent start to my night.

Sydney’s Hellions are up next, doling out some slightly more melodic fare. There’s still plenty of pace to proceedings, yet the vibes are now markedly less angry thanks to a departure from the slow, bone-jarring, down-tuned riffs favoured by First Blood. The crowd seem to engage with this, moving further towards the front of the room. The Aussies give an energetic account of themselves, bringing a welcome stylistic change-up to the bill – their material smacks of the contemporary Australian alternative scene, with newer stuff from Opera Oblivia following the classic shouty verse/catchy clean chorus dynamic while, of course, leaving room for breakdowns and groovy bits.

‘Thresher’ encapsulates the post-hardcore leanings of their new material perfectly, and while on the back of the new album they might seem more comfortable touring with bands closer to the Amity Affliction sound profile, their hardcore roots shine through in older material to eke a good old two-step out of Manchester’s ’core kids. One I’ll absolutely be checking out further – I’d definitely be interested in seeing them again, perhaps on a bill with some British contemporaries like Gnarwolves.

Next in the firing line are the first of our co-headliners Deez Nuts – who enter to the Godfather theme before barrelling straight into ‘Band of Brothers’. Frontman JJ is straight in the crowd, climbing all over a welcoming front row. It’s not a sell-out Sound Control tonight (fuck off Valentine’s poseurs, you’re not part of the scene) but that means plenty of room for two-step. The last time I caught Deez Nuts was at Manchester Academy for Impericon Fest , and they boasted a huge stage presence to win over the Slam and Deathcore crowds that time out. The chaos is magnified in a more intimate space (that’s right, I’m getting intimate with Deez Nuts) and a more concentrated fan ratio combined with the Melbournians’ trademark stamina really kicks the evening up a level.

The audience tonight are really appreciating a well-managed set littered with hits and brand new material – ‘Like There’s No Tomorrow’ is always a banger and, of course, one of the benefits of touring with Comeback Kid is that Andrew Neufield is on hand to do a ‘proper’ live rendition of ‘Behind Bars’. A most romantic February 14th set, capably finished with ‘Your Mother Should Have Swallowed You’. Roll on CBK.

I’m all moist now for tonight’s closers Comeback Kid and their Canadian take on hardcore, eh. It becomes immediately apparent that they’re as fired-up and furious as ever. ‘Wasted Arrows’ gets the crowd well on side with its big, fat riffs, yelling along with the refrain and flinging limbs about like KFC on a trampoline. This is topped by classic cut ‘Talk Is Cheap’, rolling time back to 2005 and the band’s sophomore effort Wake The Dead.

To be honest, I’d call this the turning point of the set, bodies flying everywhere from here on out in a display of pure, feel-good faux-pugilism. It’s a really cool and inclusive atmosphere, even with some Glaswegian fella we were chatting to earlier in the night (who’d travelled down for the show and the sesh) wandering around with no shirt and his kecks half down. Everyone’s singing along to ‘Didn’t Even Mind’ and belting out the ‘woahs’ in ‘Should Know Better’ towards the tail end of the set, before a huge finish on ‘Wake The Dead’, which sweat-ens things up quite a bit and entices the crowd-surfers from their slumber.

A night that tops an overpriced set menu and wait-staff who hate your fucking guts? Pretty much, yeah.

Next Story:
Oceans of Lucre: Towards a Lasting ‘Blue Economy’