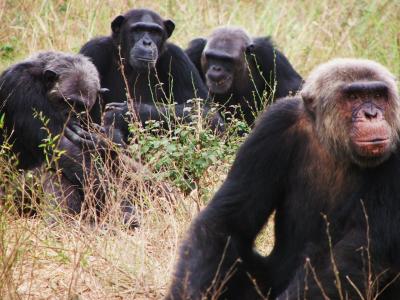 Chimpanzees, bonobos exhibit emotional responses to outcomes of decision-making. Which gives them something to do while we incarcerate them for being hirsuite.

Like some humans, chimpanzees and bonobos exhibit emotional responses to outcomes of their decisions by pouting or throwing angry tantrums when a risk-taking strategy fails to pay off, according to research published May 29 in the open access journal PLOS ONE by Alexandra Rosati from Yale University and Brian Hare from Duke University.

The researchers assessed the emotional responses and motivation of chimpanzees and bonobos living in African sanctuaries. Rosati explains, “Psychologists and economists have found that emotions play a critical role in shaping how humans make complex decisions, such as decisions about saving or investing money.

But it was not known if these processes are shared with other animals when they make decisions about their important resources–such as food.”

The scientists found that both species displayed emotional responses to the outcome of their choice, but chimpanzees were more patient and likely to take risks than bonobos. When their choice yielded the less preferred outcome, both species displayed negative emotional responses including vocalizations similar to pouts and moans, scratching, and banging–a type of tantrum thought to reflect anger in apes.

In the risky choice task, the apes even tried to switch their choice after the fact when they realized they had made a losing gamble, but never did so when their risk-taking paid off. Some of the emotional and motivational responses displayed by the apes were species-specific while others reflected individual differences in the animals.

Based on their results, the authors conclude that apes do exhibit emotional responses to decision-making, like humans.

They add that further research is needed to determine whether these emotional responses to outcomes can change the apes’ future choices and decisions.

Financial Disclosure: This work was supported in part by European Research Commission Advanced Grant Agreement 233297 and National Science Foundation grants NSFBCS-08-27552-02 and NSF-BCS-10-25172 to BH. The funders had no role in study design, data collection and analysis, decision to publish, or preparation of the manuscript.

Competing Interest Statement: The authors have declared that no competing interests exist.

Image 1:  This is a bonobo who was a study subject at Lola ya Bonobo Sanctuary in Kinshasa, Democratic Republic of Congo.

Image 2: These chimpanzees were study subjects at the Tchimpounga Chimpanzee Sanctuary in Pointe Noire, Republic of Congo.