As an artistic material blood has long been considered too powerful for use, as blasphemy, and often prosecutable. Hermann Nitsch knows this. 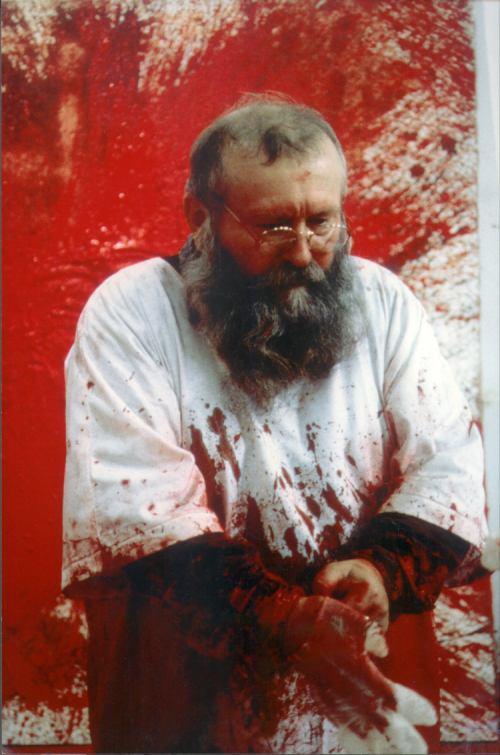 Blood is sacred. It is the law and runs deep in our cultures, religions, diseases and hereditary formations. It is the site of who we are, what makes us, the vessel of transformation and fear.

As an artistic material it has long been considered too powerful for use, as blasphemy, and often prosecutable. As a ritual material blood has a storied history, and in Christian art its role either as sacrament or shown during Christ’s trials represents the holy presence within a human.

“A ritual includes the letting of blood. Rituals which fail in this requirement are but mock rituals. Here every man knows the false at once. Never doubt it.” – Cormac McCarthy, Blood Meridian, 1985

With religion taking on a less dominant position in European society with mechanisation and the First World War, artists were able to use religion as a social topic in their art. As part of an appraisal of what it means to be alive in modern societies, art movements like actionism used transgressive materials such as blood, faeces and semen to demonstrate the visceral hungers for violence, sex and brutality waiting under the surface of a conservative post-war society. ‘The last actionist’ Hermann Nitsch has been exploring these themes since the 1960s, his aktionen performances using blood as a central motif within performances that can last several days to convey:“… a sense of pagan ritual, replete with human and animal sacrifices, copulation, blood drinking and bloodletting, disembowelment, intestines spilling from carcasses, dance, music, and audience participation.” (Kupper 2015.)

Gail Olding
In 2004, we arrived in Salzburg and headed directly up to the salt mine at the top of a huge hill. We were given a studio space so for the next eight weeks, this was base camp. We were given a large sheet of reinforced brown paper cut from a roll. Nitsch told us to let go and paint what is inside of us. Off we went, at first tentatively, afraid of getting it wrong.

Hermann said:
“You will not make a painting for six weeks; it takes that long to lose your inhibitions.”

Russell MacEwan on Blood
It has a bodily reaction on people that come in, it has an instinctive reaction. Mostly guys are the worst with blood in my experience. That kind of fight-or-flight thing. Women don’t react in the same way.

I think blood taps into primal states. You know that it’s precious in some respects, or throwaway in other respects. Certainly these areas where even if you do rationalise it or talk about it, it doesn’t quite get it across. 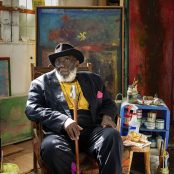