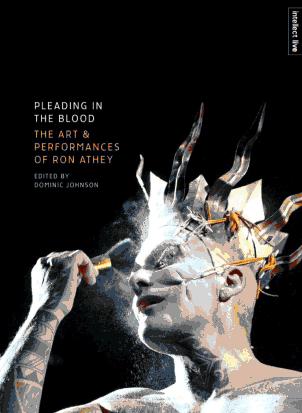 Nineteen years since Los Angeleno and  international body artist  Ron Athey’s  magnificently  bloody and seminal  vision 4 Scenes In A harsh Life exploded through the Glasgow of 1994,  I  joined Ron and company.

Never having witnessed anything like the themes of love and loss illustrated in  ‘4 Scenes…’,  I was  translated fundamentally. Hired to document the show, then to drum during the cathartic finale,  and finally pierced with limes, figs and bells, I felt part of something completely new.

Having quit the Church of Scotland and dropped out of  Divinity at Glasgow University I still lacked  a necessary spirituality  but  removed from organized religion. Being part of Athey’s company made me feel chosen. Hitting the road to Manchester that year with another run of ‘4 Scenes…’ then to Croatia, Slovenia and Italy with the epiphanic Deliverance in 1995 I never came home again.

Now aged 50, post-AIDS post HIV+, still handsome and ‘gnarly’, Athey presents Pleading In The Blood: an extensive examination of his life and work featuring the boundary-pushing yet  beautiful  photographs taken on the  “largest Polaroid camera in history” by Catherine Opie, and fantastically gritty archival flyers and photographs from his time with Rozz Williams of Christian Death and their 1980’s transgressive collaborations in Premature Ejaculation.

The seventeen extensive essays from underworld luminaries of art and music attempt to nail Athey’s ethos and individual practice.

Tim Etchells of veteran UK performance company Forced Entertainment talks lustily of the “trajectory of the crimson parabola” and “fainting punters” at the sight of spurting blood in ‘Self-Obliterations’  (NRLA 2010)  in which  “The  event is a temporal kink or rupture  – a whirlpool in time that functions as catalyst, trigger and flashpoint”. Elsewhere Matthew Goulish of Chicago-based Goat Island Performance Co. reminisces upon the collaboration between Lawrence Steger and Athey in ‘Incorruptible Flesh’ (1995)  and its being “…performance art as a different  approach to the norm, the way queer is a different approach to the norm of homosexuality”. These statements begin to address the elusive perception-shifting qualities of Athey’s work; however the fundamental viscera of Athey’s vocation must still be experienced in person.

With ‘Martyrs and Saints’  (1993),  catalysing the  ‘Torture Trilogy’  of  ‘4 Scenes…’ and Deliverance, Editor Dominic Johnson 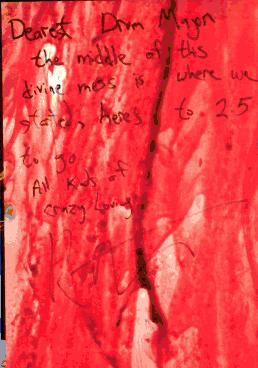 writes that these powerful works “…must be understood primarily in the context of the ravages wrought by AIDS in the years 1981 and 1995…” (Athey) “…remembers: ‘If I look through my personal photographs from that era, and see a table full of people, a small percentage of them are still alive. AIDS destroyed my AIDS destroyed my world, so how to go forward?”

How  to go forward indeed? Athey demonstrates that with  ecstatic achievement and aplomb, recently completing a U.S. tour with brand new work  Messianic Remains even beyond this book.  Cultural Engineer  Genesis  BREYER P-ORRIDGE (Throbbing Gristle and Psychic TV), confirming that  “In his bloody self-obliterations, Ron Athey reveals the profound enigma of the body as primary location of SELF. His flesh is a source of LIFE and a source of DEATH…. Yet his performances are also implicit celebrations.”

This book being undeniably a celebration of Athey’s life.

Pleading In The Blood: The  Art  and  Performances of Ron Athey is published by  Live Art Development Agency and  Intellect Live.

Previous Story:
Animals Feel the Rhythm of the Ocean