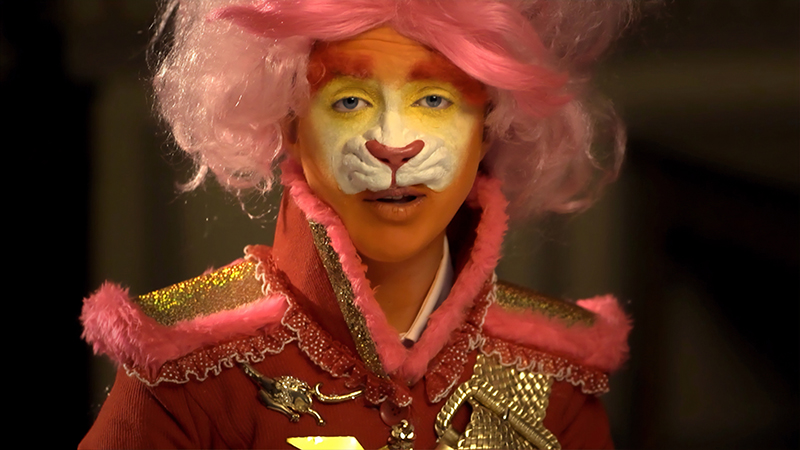 Glasgow-based artist Rachel Maclean creates surreal, vibrantly coloured worlds that serve as stages for her sharp-witted modern-day fables. She draws on references from fairy tales, children’s television, advertising and internet pop videos, constructing imaginative storylines and characters that are as humorous as they are disturbing.

Four of the artist’s films will be screened in full as part of a major solo exhibition at Jupiter Artland including Spite Your Face (2017) with which Maclean represented Scotland at the 57th Venice Biennale. Made to be screened on a continuous loop, the 37-minute long film follows a Pinocchio-esque figure who rises from a deprived social status to the heights of power by constantly lying. Referencing the Italian folktale The Adventures of Pinocchio, it was made in the context of significant changes in the political climate in the UK and abroad, in particular the divisive campaigns in the lead up to the Brexit vote and the US Presidential election.

The Lion and the Unicorn (2012), one of the artist’s earliest political satires, commenting on Scottish independence and the crisis of the union, will also be on display. In the film, Maclean plays the character of a lion to represent the English, and a unicorn to embody the Scottish. As with many of her works, she uses appropriated voices – in this case, the voices of Jeremy Paxman and Alex Salmond – to comic effect.

Two of the artist’s shorter films, Germs (2013) and Eyes To Me (2015), provide an insight into a slightly different style of work. Resonating with the current era of sanitisation and social distancing, Germs follows a woman in battle against an army of pink-and-purple germs, each played by the artist in extravagant self-made costumes whilst Eyes To Me depicts a more sinister narrative. Shifting formats between a fashion shoot, a kids TV programme and an interview, the film centres around a young protagonist called Sophie as she moves through an enchanted garden, coerced and reprimanded by an omnipresent male voiceover.

The exhibition will also unveil a new commission and the artist’s first permanent outdoor installation entitled upside mimi ᴉɯᴉɯ uʍop. Situated at the end of a woodland path, the structure takes the form of a candy-coloured toy shop which appears abandoned and derelict from the outside, but inside, resides Mimi, a cartoon princess made with motion capture, who leads audiences ‘into the topsy-turvy world of end-game capitalism; a 21st century fairy-tale about the experiences of young adults and consumerist desire.’ The work was created in dialogue with teenagers from across Scotland and explores some of the pressures facing young people as a result of the pandemic such as the rise of online culture and the subsequent decline of real-life spaces to meet and socialise. A public programme will accompany the commission and there are plans to create a moveable iteration of the installation to tour high streets across the country.

Featured Image: Rachel Maclean, The Lion and The Unicorn, 2012, digital video still. Commissioned by The Edinburgh Printmakers for Year of Creative Scotland.