What is Black and White in Sound?

How do we remove timbre from sound, the way we can remove color from an image? How do we get an aural analog of black & white images? 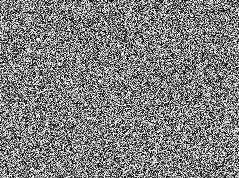 [dropcap style=”font-size:100px; color:#992211;”]I[/dropcap]f the color spectrum of vision is analogous to the audible frequency spectrum of sound, what is the aural analog to black & white photography?

In sound, we often say that timbre/texture is ‘sound color’ – reinforcing this analogy. Removing color from an image leaves the simple fact of intensity of light. Does ‘removing’ timbre from sound even make sense in this same way?

The first thought would hold that this equation is true. If black is the absence of color and white is the presence of all colors [1] then, at first glace, this idea makes sense. White noise is defined similarly to white light, but in the range of humanly audible sounds: all frequencies, equally strong [2]. And on the other hand, silence certainly seems analogous to the absence of color.

But on further thought, I’m not sure the analogy is all that accurate.

Does this image look white to you?

It doesn’t to me, either. It’s ‘white noise’ in a visual greyscale representation. Clearly, white noise is not white. It’s a mixture of a number of different frequencies/intensities. White noise in sound has a timbre, just as this visual white noise has texture.

We often describe rushing water, or ocean waves as nature’s sources of aural white noise. Would we say that this is nothing but intensities, with no timbre? Obviously not. It clearly has texture and timbre.

And as for black equating to silence, I have trouble with that one, too. I can see a black object, but I can’t hear a silent sound.

So much for that analogy….

How do we remove timbre from sound, the way we can remove color from an image? How do we get an aural analog of black & white images?

Addendum
It’s all about the rods and cones, of course….