OK, so ‘big mofo tortoises’ isn’t actually their scientific name, but we like to tell it like it is.

A rare piece of environmental good news. Those giant Galapagan tortoises have been feeling the funk and getting it on. With the happy result that a once-endangered species is now a viable colony. Now, on to those painfully buttoned-up Giant Pandas….

A population of endangered giant tortoises, which once dwindled to just over a dozen, has recovered on the Galapagos island of Española, a finding described as “a true story of success and hope in conservation”.

Some 40 years after the first captive-bred tortoises were reintroduced to the island by the Galapagos National Park Service, the endemic Española giant tortoises are reproducing and restoring some of the ecological damage caused by feral goats that were brought to the island in the late 19th century.

“The global population was down to just 15 tortoises by the 1960s. Now there are some 1,000 tortoises breeding on their own. The population is secure. It’s a rare example of how biologists and managers can collaborate to recover a species from the brink of extinction, ” said James P. Gibbs, a professor of vertebrate conservation biology at the SUNY College of Environmental Science and Forestry (ESF.

Gibbs and his collaborators assessed the tortoise population using 40 years of data from tortoises marked and recaptured repeatedly for measurement and monitoring by members of the Galapagos National Park Service, Charles Darwin Foundation, and visiting scientists. 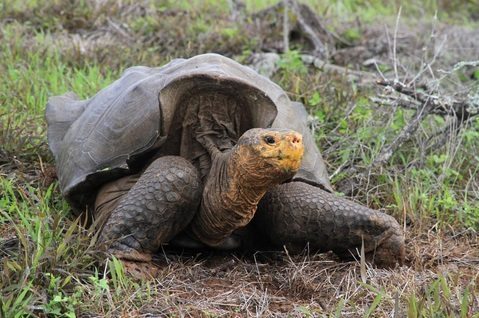 But there is another side to the success story: while the tortoise population is stable, it is not likely to increase until more of the landscape recovers from the damage inflicted by the now-eradicated goats.

After the goats devoured all the grassy vegetation and were subsequently removed from the island, more shrubs and small trees have grown on Española. This hinders both the growth of cactus, which is a vital piece of a tortoise’s diet, and the tortoises’ movement. Chemical analysis of the soil, done by Dr. Mark Teece, an ESF chemistry professor, shows there has been a pronounced shift from grasses to woody plants on the island in the last 100 years.

The shrubs and trees also inhibit the movements of the endangered waved albatross that breeds on the island. Gibbs said the plants make it difficult for the ungainly sea birds to take flight.

“This is a miraculous conservation success accomplished by the Galapagos National Park Service,” said Gibbs, ” but there is yet more work to fully recover the ecosystem upon which the tortoises and other rare species depend.”