Bowers honours request by alleged assault survivor who states she did not give permission for her image to be included in the piece. 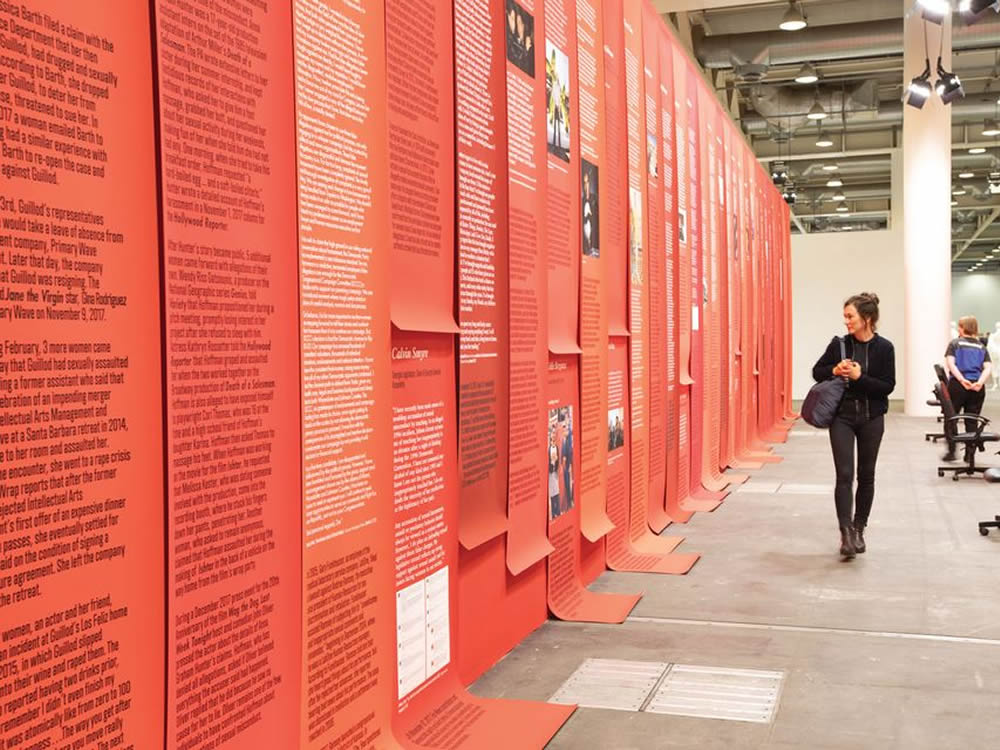 [dropcap style=”font-size:100px;color:#992211;”]A[/dropcap] panel from Andrea Bowers’ Open Secret installation surveying recent sexual harassment claims in Art Basel’s Unlimited sector has been removed after a woman whose image was featured said she had not given her permission for it to be used.

The panel featured an image of a tweet shared on 5 October 2017 by Helen Donahue, a Los Angeles based digital media strategist and writer, that included photos of bruises on her face and torso she claims were inflicted by Michael Hafford, a former contributor to the magazine and website Vice who was accused by four women of assault. The installation includes panels in various shades of red all outlining around 200 sexual harassment allegations, along with official statements from the accused, that came to light through the #MeToo movement and were catalogued by the artist and her team of collaborators.

Donahue said on Tuesday via Twitter that she had not been contacted by Bowers to ask permission to use the image of her previous tweet or her testimony. She also alleged that she had not found out about her inclusion in the installation until she saw the work in an Instagram post by someone she did not know, and wanted the panel taken down immediately.

Today, Art Basel removed the panel on which Donahue was featured from the installation and Bowers issued a statement apologising. “I should have asked for her consent,” the artist says, adding that she has reached out privately to Donahue, “and am very much looking forward to listening”.

Bowers’ representing galleries involved with the production of the work—Andrew Kreps, Kaufmann Repetto, Vielmetter Los Angeles and Capitain Petzel—also issued an apology to Donahue, noting that they “stand by Andrea Bowers and her work and support the conversation that has only just begun”.